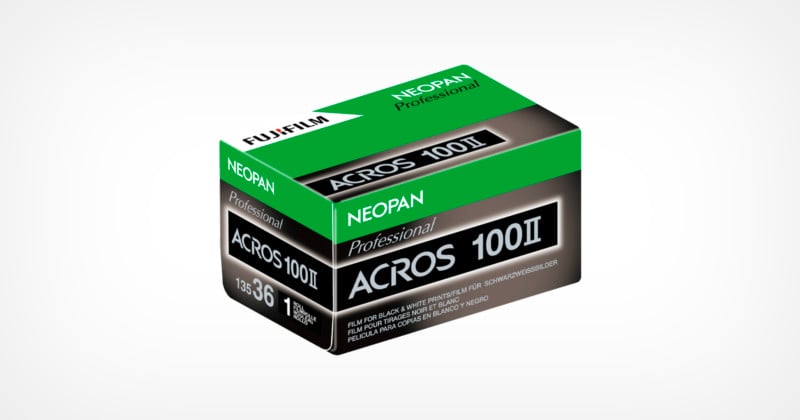 Five-packs of Fujifilm Neopan 100 Acros II black and white negative 135 roll film are currently on sale at Adorama for $25, which is 50% off the regular price and is their lowest ever.

Right now, Adorama is offering five-packs of the film for $25, which it tells PetaPixel is the lowest it has ever been available (this same five pack has been sold for as low as $30 in the past); it is regularly priced at $50. Adorama doesn’t specify if the deal is limited, but indicates that the sale will continue until the film sells out.

Neopan 100 Acros II is described by Fujifilm as the newest addition to its family of films. It is a medium-speed, ultra-high-image quality black-and-white negative film that Fujifilm says features the world’s highest standard in grain quality among ISO 100 films.

The company says that it has excellent processing characteristics, rich gradation, outstanding sharpness, and a wide range of photographic applications and is suited for all normal indoor and outdoor photography as well as long exposures.

Neopan was actually originally a family of black-and-white films but now only contains the single Neopan Acros 100 II stock as Fujifilm has limited its film production efforts. More recently, the company has been focusing its resources on its biotechnology division, which has been growing significantly since the onset of the pandemic.

The Neopan Acros 100 was discontinued in 2018 but relaunched as Neopan Acros II in 2019 and has seen widespread availability since. This new stock is a reformulated version of Neopan 100 Acros is a slighly different emulsion, but supposedly retains the reciprocity characteristics of the original.

Fujifilm Neopan Acros 100 II is available in both 120 and 135 formats, although the 120 roll film is not quite as discounted as the 135 format. Five packs of the 120 format are currently available for $40, down from the regular $50, while single packs are discounted from $12 to $9. While both formats of the Neopan Acros 100 II are a good deal, the 50% discount on the 135 format film is a particularly good bargain and shouldn’t be missed.