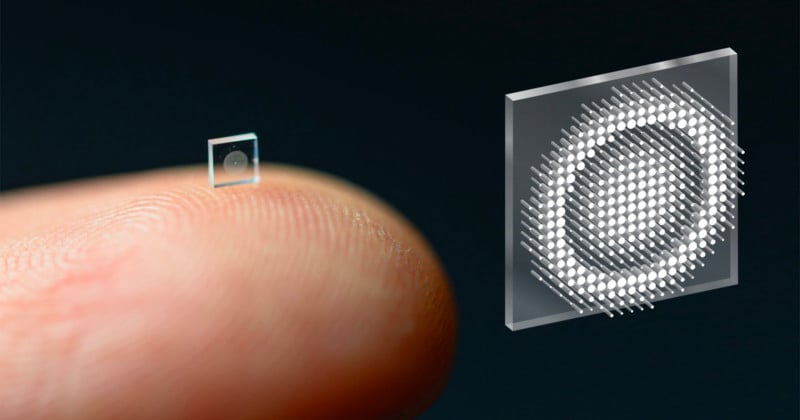 Researchers from Princeton University and the University of Washington have developed a high-resolution, full-color camera that is the size of a grain of salt that is the next generation of metasurface technology.

Tiny cameras have long been thought to have the potential to see problems in the human body and help scientists and medical professionals treat various illnesses, but past implementations of metasurface-based compact cameras have only been able to produce fuzzy, distorted images with limited fields of view.

“While sensors with submicron pixels do exist, further miniaturization has been prohibited by the fundamental limitations of conventional optics,” the researchers say. “Traditional imaging systems consist of a cascade of refractive elements that correct for aberrations, and these bulky lenses impose a lower limit on camera footprint. A further fundamental barrier is a difficulty of reducing focal length, as this induces greater chromatic aberrations.”

But these researchers appear to have overcome these issues. In a paper published in Nature and summarized by Princeton University, the team shows that it was able to produce what they describe as “crisp” full-color photos that are “on-par” with a conventional compound camera that is 500,000 times larger. The team is calling the new camera a “neural nano-optic” system.

The metasurface is studded with 1.6 million cylindrical posts that are each roughly the size of an HIV virus. Each post has unique geometry and functions like an optical antenna, Princeton explains. These unique cylinders combine with machine learning algorithms that interpret how light hits each and combine the data together to produce high-quality images.

Below is a figure from the paper that shows what the neural nano-optic camera can capture compared to previous methods. 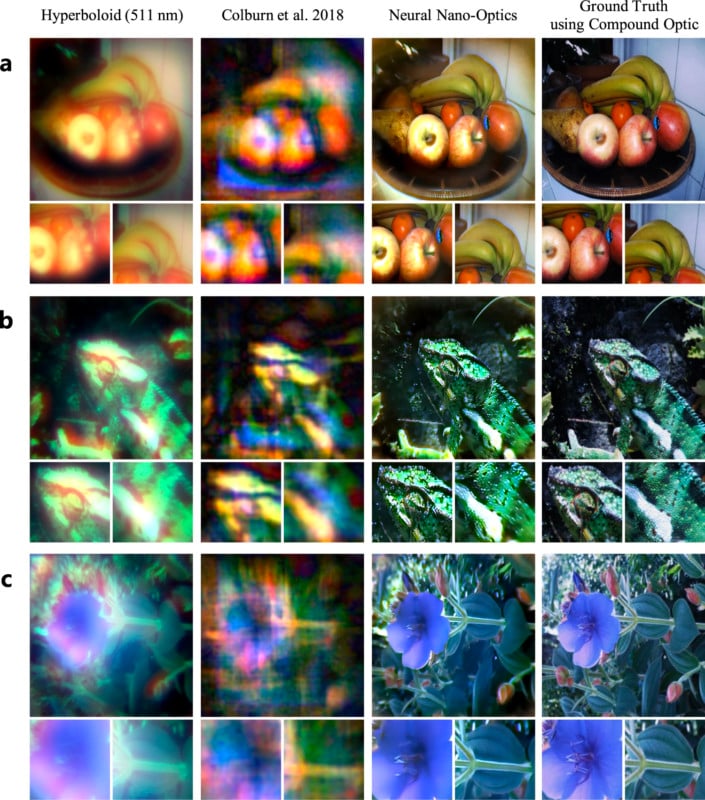 “We perform comparisons against a traditional hyperbolic meta-optic designed for 511 nm and the state-of-the-art cubic meta-optic from Colburn et al,” the researchers explain. “Additional experimental comparisons against alternative single-optic and meta-optic designs are shown in Supplementary Note 11. Ground truth images are acquired using a six-element compound optic that is 550,000× larger in volume than the meta-optics. Our full computational reconstruction pipeline runs at real-time rates and requires only 58 ms to process a 720 px × 720 px RGB capture.”

The researchers are now working to add more computational abilities to the camera, and beyond improving the image quality they would like to add the capability for object detection and sensing that would be relevant in medicine and robotics.

“We could turn individual surfaces into cameras that have ultra-high resolution, so you wouldn’t need three cameras on the back of your phone anymore, but the whole back of your phone would become one giant camera,” Felix Heide, the study’s senior author and an assistant professor of computer science at Princeton says. “We can think of completely different ways to build devices in the future.”