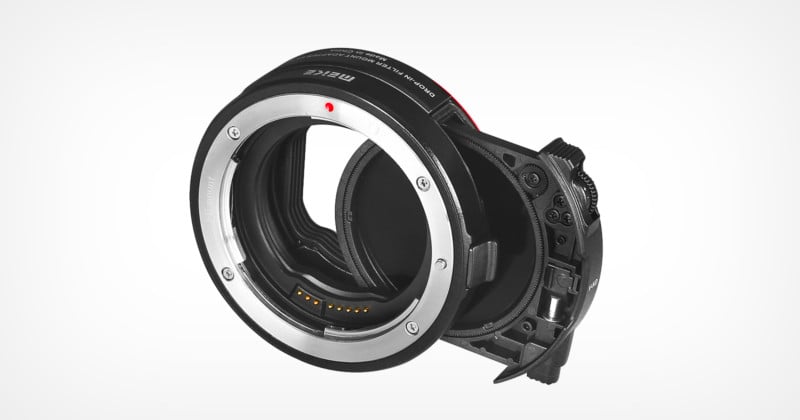 Meike has announced the MK-EFTR-C Drop-in Filter Mount Adapter which allows for Canon EF and EF-S lenses to work with RF-mount cameras with aperture control and autofocus and image stabilization support along with the ability to use drop-in filters.

The new adapter is compatible with all EF and EF-S lenses along with all RF-mount cameras and Meike states that it supports autofocus via a built-in electronic contact that theoretically also allows for the transfer of EXIF data.

While EF to RF adapters are common and Canon even produces one with Variable ND drop-in filter support, it’s not cheap at nearly $400. Meiki appears to want to cut in to that market by offering what it seems to claim to be equal support but for less than half the price. The Mk-EFTR-C is built with an all-metal construction and what is promised to be “fine workmanship” and “solid quality.” 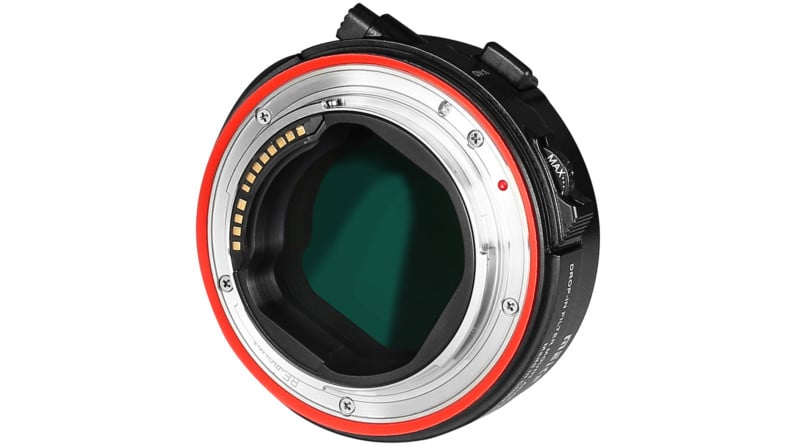 The adapter weighs 138.9 grams when it is outfitted with the variable neutral density filter and measures 2.87 by 0.95 inches in size, which is extremly close to the size of the official Canon adapter which measures 2.9 by 1.0 inches in size, but is a bit heavier as the Canon version weighs 121 grams.

While the variable neutral density filter is included with the adapter, Meike also sells additional filters including a clear glass filter as well as a circular polarizer.

This type of adapter is useful for both photographers and videographers and allows for the use of a variety of lenses with different front filter sizes without needing to carry along an equal number of different front-mounted filters. Kolari vision also produces a drop-in filter adapter that PetaPixel’s David Crewe positively reviewed.

At the time of publication, the Meike MK-EFTR-C was already listed as out of stock but the company says that it expects to be able to ship more by the end of November.

The adapter, which as mentioned includes the variable neutral density drop-in filter, costs $150 while the filter itself can be purchased for $80 directly from Meike. The circular polarizer droop-in filter is listed for $48. The “extra holder” listed on the site is $32 very likely refers to the clear glass filter, which is particularly useful to protect and seal the adapter when either the variable neutral density filter or the circular polarizer is not in use.