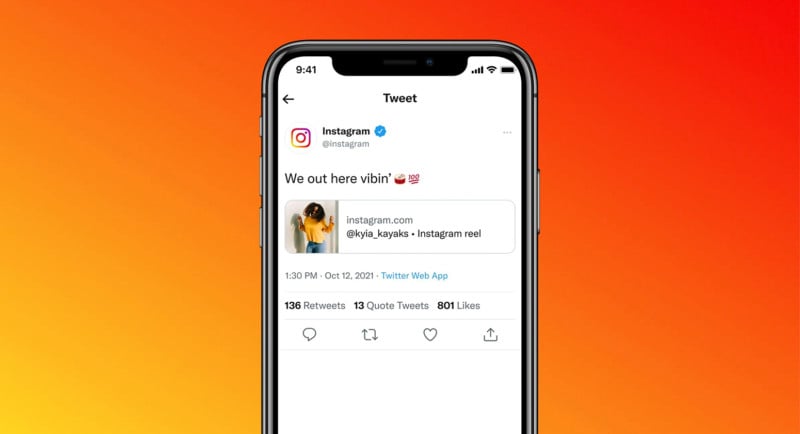 Instagram has announced that it will allow post previews to once again appear in links on Twitter… sort of. While previews do technically exist, they aren’t quite the same as users might expect and aren’t a full return to what once was almost a decade ago.

Many long-time users of both platforms may remember the ability to to share Instagram posts directly to Twitter long ago, but when the card preview was removed, many were forced to find other ways to streamline social media engagement. Some turned to platforms like IFTT to continue the practice of automatically sharing the full image from IG to a Twitter as well to avoid the tedium of creating multiple posts and repeating the same steps.

According to Mashable, the preview feature of Instagram posts on Twitter was removed from the service nearly a decade ago, making its reemergence suprising and unexpected.

Around December of 2012, Instagram disabled the preview card feature because the company did not want users to be able to view content from its platform on a competitor’s service. An executive at the company at the time said they did this in an effort to force users to Instagram instead, even if that meant the at-the-time lackluster browser experience.

They said it would never happen… Twitter Card previews start rolling out TODAY. 👀

As to why the company has decided to re-enable this feature after almost a decade is unclear. Some speculate the decision came as a simple way to garner good will and positive press after the deluge of negative news stories that have been published over the past few months about Instagram, Facebook, and the new parent company Meta. Regardless of the why, users will be happy to have a feature back, even though the formatting is much different from its predecessor.

In its current iteration, a link preview card is embedded in the tweet (similar to how YouTube links appear on the platform) instead of the full-size Instagram photos that were included before the cards lost support in 2012. Regardless, it is still a massive improvement over the generic hyperlink text that users have dealt with over the last nine years.