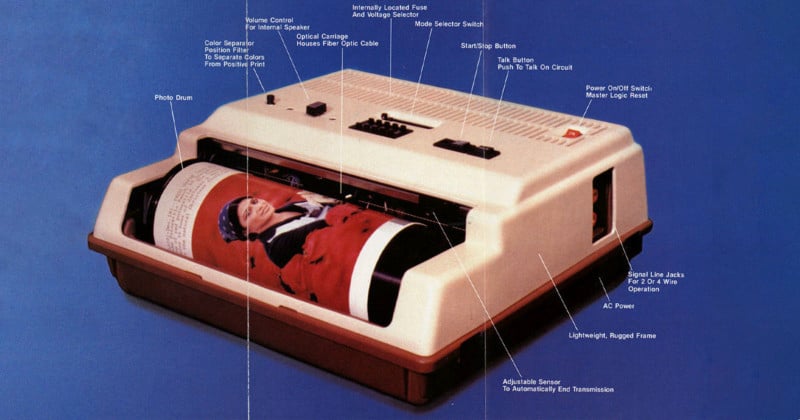 Thanks to advancements in modern technology, photojournalists can have a near-instantaneous connection with agencies and outlets with very little downtime between when a photo is captured and when it is published. But it wasn’t always like this.

To celebrate its 175th birthday in 2021, the Associated Press (AP) has published a series of detailed blogs that dig deep into its corporate archives and explain as well as show the history of the organization. In part seven of the eight-part series, the AP shared a scan of an old brochure that advertises the latest of 1970s technology: the AP Portable Picture Transmitter.

This large device is basically a portable fax machine that would be able to send both black and white or color photographs over long distances using telephone lines. It could also be used to send drawings or printed materials of any kind that could fit on its scanning spool.

“Sending color photographs is greatly simplified with the AP Portable Transmitter,” the description reads. “A single color print is mounted on the drum and by simple positioning of the desired filter in front of the photo multiplier, the same print is sent three times. One time each for cyan, magenta, and yellow. Of course, the transmitter can also be used to send regular black and white separation prints.”

One of the major selling points was that it only contained two mechanical functions: the rotation of the picture drum and the electronics that moved the fiber optic carriage. The entire machine was powered by an 8-bit microprocessor that controlled the timing, motor, video, and oscillating functions. It also controlled the automatic gain system and would prescan the entire photograph to obtain the best white levels and then set that white output signal to the proper level.

The AP Portable Picture Transmitter was also capable of operating in the AM or FM modes in the laserphoto standards that were used at the time.

While it isn’t small by any modern standards, at the time it was considered to be light and compact as well as durable — it took up no more space than 170 cubic inches.

The design of the device is similar to one that was used by other organizations at the time, including the United Press International UPI Model 16-S. This drum-based transmitter was detailed in a blog post from Dallas Morning News photo director Chris Wilkins back in 2012. In that explanation, it was revealed that transmitting images this was was extremely slow and could take between eight and nine minutes to send a single black and white photo. The UPI 16-S was used from the early 1970s up through around 1991.

The AP Portable Transmitter looks as though it has more features and was slightly more advanced in its design than the UPI 16-S, though additional information on it outside of this single image from the AP’s archives is thin. What is notable is that the AP eventually switched to a different device called the AP Leafax 35 by 1988, which was more advanced and was housed inside a silver briefcase (which can be seen on the AP’s blog post). It eventually became the proprietary technology of the AP as it was capable of the same functions as the Portable Transmitter but was also a portable negative scanner, the first device of its kind that could perform both duties.

That said, it still wasn’t fast. In an interview with PetaPixel from 2015, photographer Brad Mangin mentions that it could take upwards of 30 minutes to send a single photo.

“I was covering sporting events all over the place and sending pictures back to our picture desk in New York over analog phone lines with an AP Leafax transmitter that took 30 minutes to send one color picture — and that was state of the art at the time!” he said.

Gratefully, technology has advanced to the point where in the time it once took photojournalists to send a single photo, modern methods could send hundreds.

Image credits: Header image via the AP and used with permission.