Should photographers sell their unedited RAW files to a client? Is there any benefit in doing so? These questions are discussed in this eight-minute video from David Bergman and Adorama.

The idea of handing over the RAW files has been debated before and at length. One thing that Bergman clears up in this discussion is that oftentimes when a client is asking for the RAW, they don’t actually mean the uncompressed .NEF or .CR3 files the camera produces, but rather the full resolution unedited JPEG as usually most non-photographers don’t have access to RAW processing software like photographers do anyway. The clients may simply want these files because they think the photographer isn’t delivering the highest resolution files possible for whatever reason.

Bergman goes on to say that creatives should have a discussion with our clients about this to find out exactly what they are looking for and detail how the editing process is done so they are reassured that they have received the highest resolution image that they paid for. 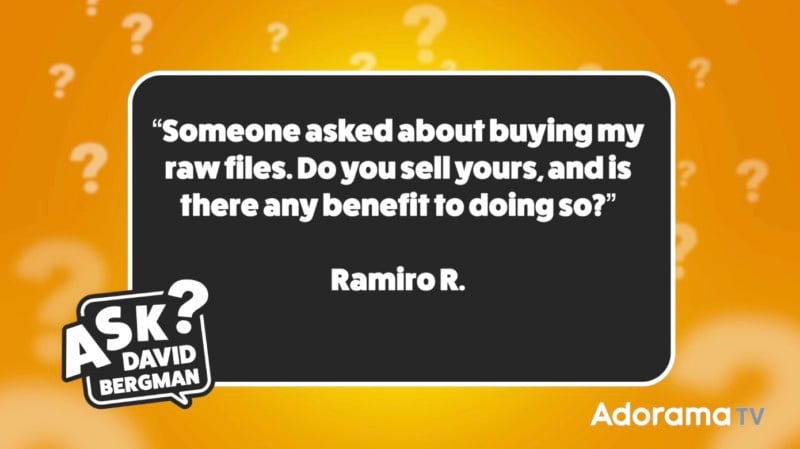 If, however, they actually are asking for the RAW files, should photographers be willing to discuss handing them over? And if so, is there any benefit to selling them to the clients?

Bergman opens this discussion with the first real clear and concise answer, and that is “yes” because of the income opportunity. The key here is to be sure to price unedited RAW files at high enough of a margin to not lose out on any potential income from print sales, since technically speaking, the client could create prints on their own with those original files.

Asking a photographer to hand over a memory card, USB, or DVD of raw images is akin to asking an author to present you with their book in manuscript format: unedited, unformatted, and including the paragraphs and chapters that didn’t make it.

But creatives are often hired because of a particular look and style they can produce and often times that requires at least some minimal retouching and edits to achieve. Photographers have to ask if they want their unedited images out there without their name attached to it.

For people like photojournalists, there is likely very minimal editing involved and so in that case, it may not be much of an issue. However, for fashion photographers and conceptual artists, even if they were to put in as much effort as possible to get the image as close to the envisioned result in-camera, there is likely a lot of time spent on post-production editing every little detail to get the specific style. The last thing these photographers will want is their brand associated with an unedited and unprocessed image, let alone one that may have been altered and retouched by someone giving the shot a look and feel that is very far from the stylization they want to be affiliated with their name. In these cases, even though it is possible to earn much more money selling the RAW files to the client, Bergman still votes “no” on selling the unedited files.

Author’s take: Personally, I tend to agree with Bergman’s point of view on the matter. Even though there is a possible large financial benefit in just selling the RAW files after a shoot, it would feel far too “unprofessional” to hand them over to someone with the expectation of my name attached to it.