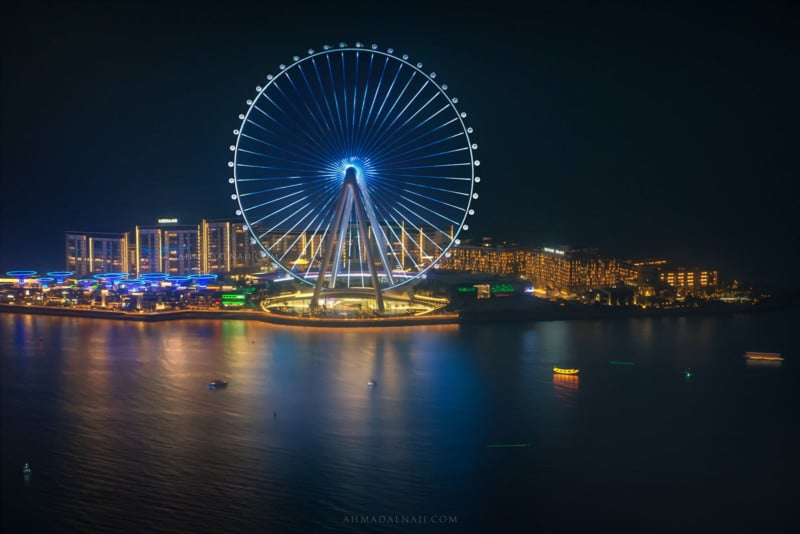 Dubai, the city that is always present when you need urban and architectural wonders. The tallest building in the world, man-made islands with the shape of a palm, a stunning museum dedicated for the future. And now, the largest ferries wheel in the world: Ain Dubai, which means Dubai Eye in Arabic.


Over the past 9 months since the beginning of this year, I have photographed this stunning masterpiece in different outstanding moments, including fog, a fireworks show, and even during moonset.

Located on a small artificial island in the sea, the location of Ain Dubai is one of the factors that stun you in addition to its massive height (it stands at 250m/820ft. The tallest building on the island is around 15 floors, which gives you an idea of how massive this thing is.

The first picture in this collection was taken on New Year’s Eve. I knew that there was a fireworks show from the beach next to the island. I took a high vantage point from the 90th floor (yes, 90!) on one of the tallest residential towers in the world to capture the show along with Ain Dubai.

What surprised me was the fireworks shell coming from another spot closer to me on the right side of the wheel. This was a very welcomed surprise which added a completely different depth for the photo and framed the wheel between 2 groups of fireworks.

I think the lesson learned from here is that along with preparation, luck can complement your photos and take them to another level. But remember, luck comes only to the prepared!

The very next day there was the same fireworks show so I decided to go on the roof of the Ceasers palace hotel and capture the show so I could cover it from both sides.

Another shot that took me some planning was the moonset one. Last year, I captured a shot where the moonlight was reflected on the sea, creating a dramatic shadow of the wheel. But at that time the cabins on the wheel were not installed yet.

After more than a year passed, I decided to do the planning to capture it again. I used the amazing PhotoPills app to know when the moon will set near the island. It showed that on September 19th at around 4:00 am it would set in the perfect spot. It would also be an almost full moon, which means a strong light source. 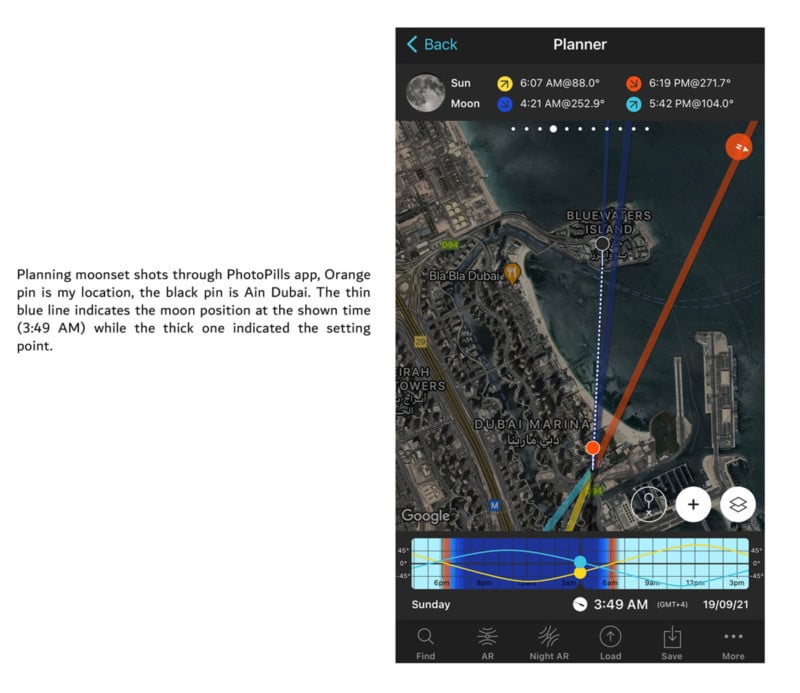 What was left was to spend a sleepless night with the moon and Dubai Skyline (which is a treat!), and the results were breathtaking!

The second part of this project was fog shots. It is a dream for almost every photographer in the world to capture the Dubai Fog. For this particular project, I had the chance to capture the fog with Ain Dubai during some surreal moments.

The first one was during light fog, which is closer to very low scattered clouds, but during sunset, which is very rare for fog as it usually happens during sunrise. As the sun sets from the seaside, this gives a stunning golden light for the fog!

For this image, I did some multiple images blending from the same day. The sun shot is from when it came closer to the wheel to create a more artistic scene. The other two photos were during a morning where fog lasted for around 8 hours! I was lucky enough as well to get a shot where the wheel is covered with fog and you can see a part of the sea where some boats started to move as the day started.

The second photo is more classic yet very dreamy, with only half of the wheel rising above the fog, emphasizing the idea of its massive size!

I went for very basic and minimal editing here and wanted to achieve the high-key mode.

The last fog photo is absolutely one of my favorites, captured in the early morning hours before sunrise.

It’s a long exposure shot — the wheel was spinning while they were doing some pre-opening testing. This gave the cabins the “blurry” effect, and I decided to go with the monochromatic look to make it even more abstract and simple. All the colors of the wheel were unified with the fog strip, which is lit by the island street and building lights.

I always aim to bring fine art and storytelling into cityscape photography. I don’t aspire to just capture a technically correct photo and stop there. I want the viewer to stop and interact with the photo just as they do in a museum.

I desired specifically in this project to narrate the story of this project by creating images that let the people feel joyful, surprised, and amazed. This is basically the emotions that a 250-meter-tall Ferris wheel in the middle of the sea will give you when you see it in real life, and as an artist, my role is to transform these feelings into my pictures.

I emphasized how amazing this structure is and what does it offer for its location in the sea, from the moonlight reflection to the boat rides during the fog, these points represent the location importance expressively and artistically. And the fireworks shots for example represent the celebration and the joyful mode that ferries wheel offers.

About the author: Ahmad Alnaji is a fine art cityscape and architecture photographer based in Dubai. The opinions expressed in this article are solely those of the author. You can find more of Alnaji’s work on his website and Instagram. This article was also published here.