To start, Dolby suggests shooting the products separately to avoid them reflecting onto each other, making it easier to get an ultra-clean look for each piece. Dolby also suggests using an app called AutoRetouch to help make automatic clipping paths upon importing the images into Photoshop, saving a lot of time on post-production. 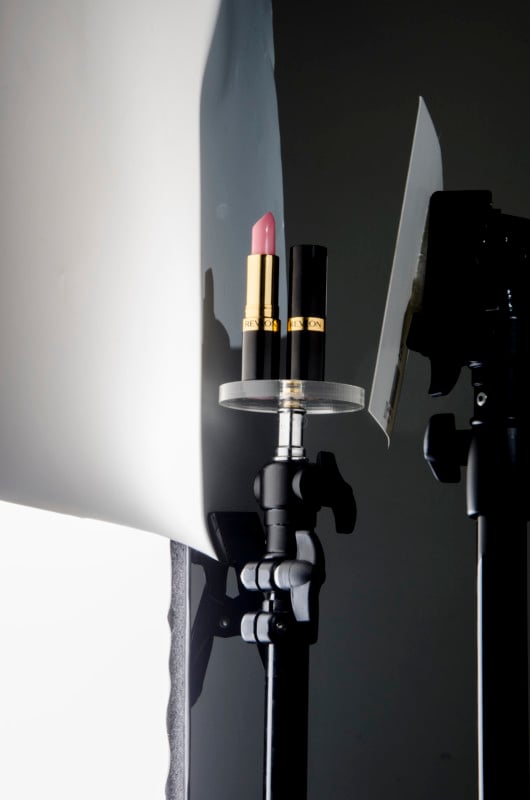 Dolby then shows his setup of a long strip of diffusion paper that extends from the lens to the product where he has placed a single Speedlight in a strip box. The light source is on a slight angle behind the product allowing quick and minor adjustments for the shot to get things just right. He says that reflective products will often get a “dark padding” on the product that will vary based on the Speedlights’ positioning.

Ideally, if the light source is positioned properly, the spread will fall on just about half of the product. Then it is just a matter of correctly placing a bounce card (reflector) on the opposite side of the product to fill in the shadows and recycle the light from the strip box. The depth of the bounce card placement will affect the padding position, so be sure to make adjustments accordingly to achieve a flattering and consistent light pattern to be used across all similar products. 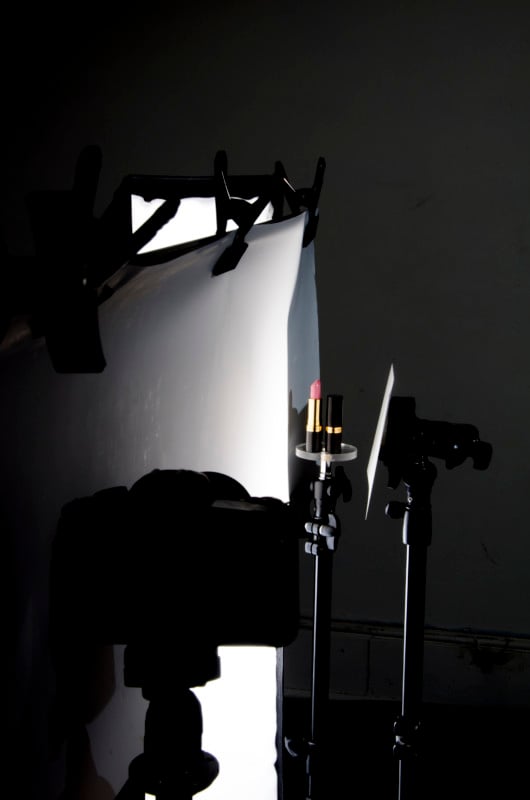 Once a clean setup is achieved, he recommends photographers start rotating the products through the setup, making sure the light and padding fall in similar locations for consistency. Then, all that is left is to import the files into Photoshop to begin the retouching.

Dolby explains that using AutoRetouch can help speed things up by automatically creating clipping paths and removing backgrounds for product work, making bulk editing easier. In May, AutoRetouch added a feature that allows editors to bulk edit any product photo with artificial intelligence.

Once inside Adobe Photoshop, Dolby adds a reflection by duplicating the products, flipping them vertically, positioning the “reflection” directly below the originals, reducing the opacity significantly, and finally applying a linear gradient so that there is a smooth fall-off providing a nice, catalog e-commerce looking image. Finally, he shows how to fix any inconsistent shadows on the reflective parts of the product by copy and pasting stretched portions of the product over the existing setup and masking them in accordingly to achieve a very consistent look across the whole image. Beyond that, the amount of retouching and photoshop fixes is simply up to the user (or client).

Image credits: Photos by Dustin Dolby and used with permission.