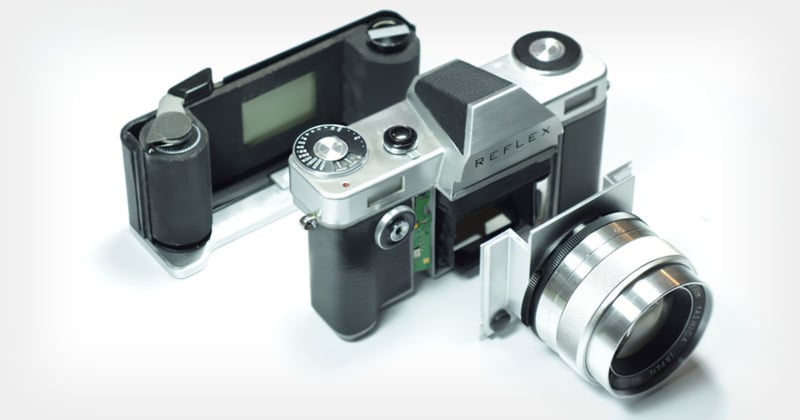 Three years after raising £100,000 on Kickstarter, the Reflex SLR project may be shelved indefinitely due to major issues in developing a prototype that have burned through the cash raised from backers.


Reflex was launched in a Kickstarter crowdfunding campaign by Laurence Von Thomas back in late 2017 with the goal of developing the first newly designed manual SLR system camera in over a quarter of a century.

The camera was to feature a modular design that allowed both the lens mount and the film back to be swapped out for greater customizability — it would support a host of lens mounts as well as allow photographers to swap the film back in and out without having completed each roll first.

Other planned features included a flash, a continuous LED, built-in metering, an open-source design, and more.

Here’s the original video introducing the project on Kickstarter, which awarded Reflex its “Project We Love” badge:

It seems less than a year wasn’t enough time to develop, manufacture, and ship a new SLR camera system.

Kosmo Foto reports that Von Thomas held a public meeting on Zoom on August 18th in which he told attendees that the camera was about 80% complete but unable to be finished.

“Von Thomas told the meeting, which had been called by backers wanting an update on the project, that the project’s lengthening lead time had swallowed up most of the cash raised and there was now too little to proceed without further investment,” Kosmo Foto writes. “He said the project had effectively ground to a halt in November after the last failed attempt to get an investor on board, though there had been some intermittent work toward building a pre-production model since then.”

Von Thomas says he had originally wanted to source a shutter that Sony had been using for a digital camera, but the discontinuation of the camera also killed off that prospect. The Reflex SLR team also does not have the in-house expertise necessary to create a new shutter from scratch.

With no options available for sourcing an appropriate shutter and with developing a shutter costing too much, the Reflex project now appears to have one foot in the grave.

“I’ve tried everything I can and I’ve hit every single wall,” Von Thomas said in the meeting, according to Kosmo Foto. “At the moment I don’t see any other way.”

If the Reflex project is indeed shuttered, it’ll join an ever-growing list of high-profile camera equipment startups — including Triggertrap and the original Meyer Optik Görlitz reboots in the mid-2010s — that have raised a significant sum of money on Kickstarter only to find in the end that they couldn’t deliver on their goals.