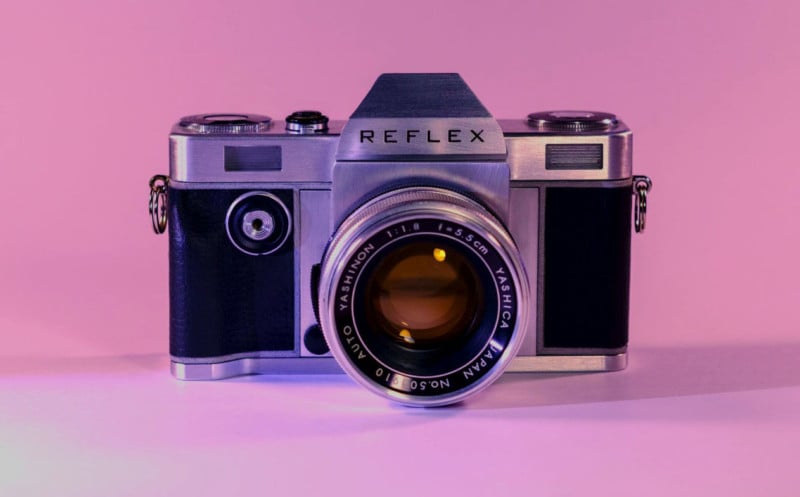 “Reflex is a modern update of the timeless manual SLR 35mm film camera,” the startup says. “Distinctive in its modular design, it combines contemporary mechanical and electrical engineering with the classic design of an analogue camera…”

The Reflex combines old, time-tested designs with exciting new ideas to create a brand new concept of what a manual film SLR can be for the modern generation of photographers. 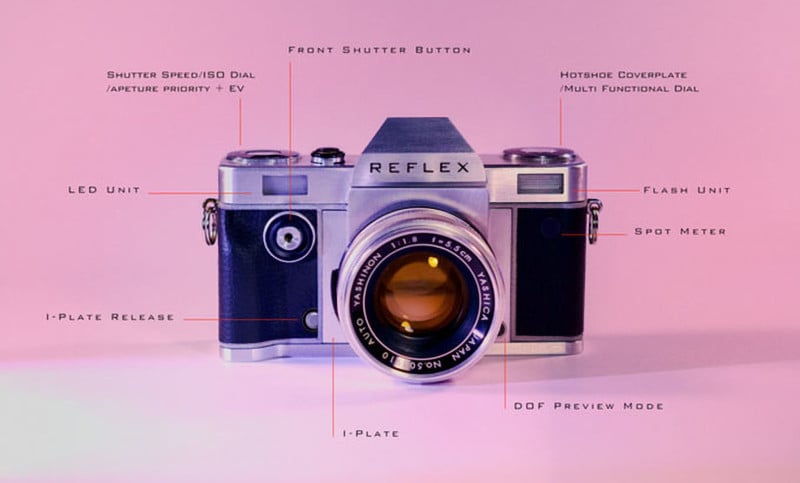 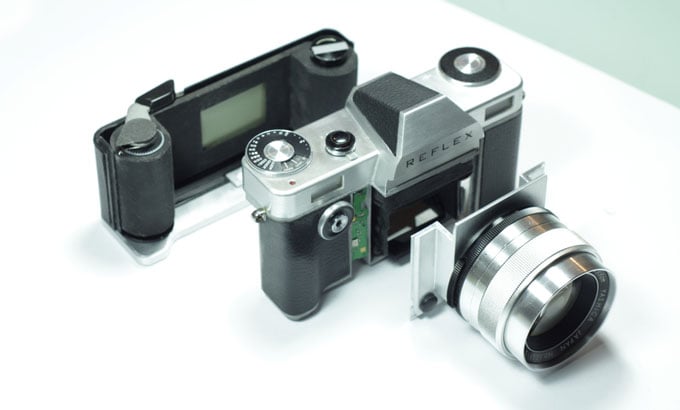 The I-Plate is the system’s interchangeable lens mount. The camera ships with a universal M42 mount, but mounts for Nikon F, Olympus OM, Canon FD, and Pentax PK will also be available as alternatives. 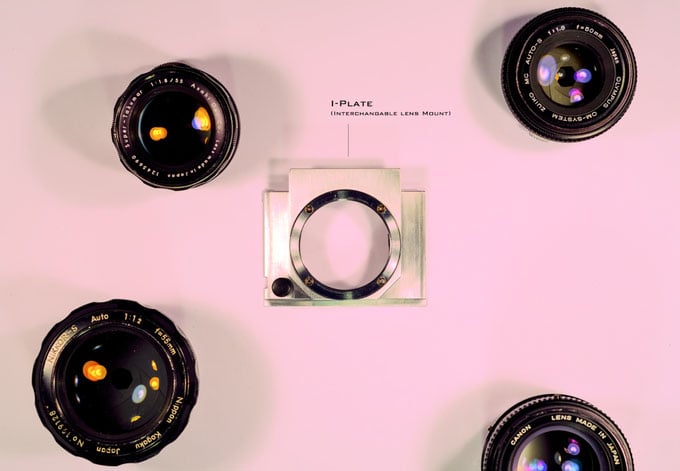 The Reflex I-Back interchangeable back is designed to help upgrade the process of choosing film. Not only can you quickly change film by swapping the backs, you can also change to a different film mid-shoot and finish the roll you were on at a later time. 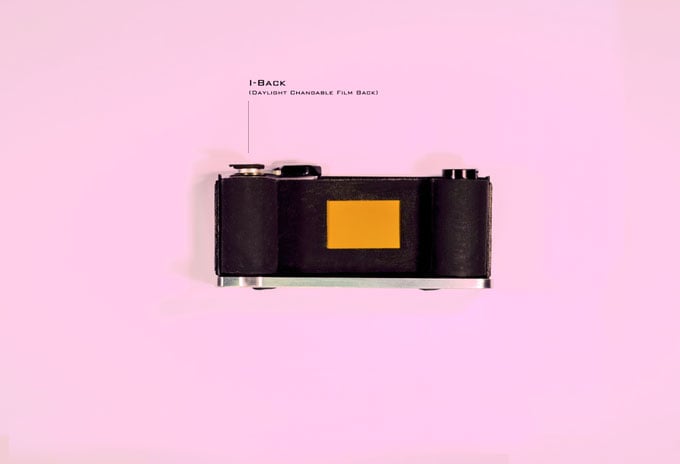 On the front of the camera, you’ll find a flash and a continuous LED light source — the first time both have appeared on an analog camera together. Each of the light sources can be adjusted with 3 intensity levels. 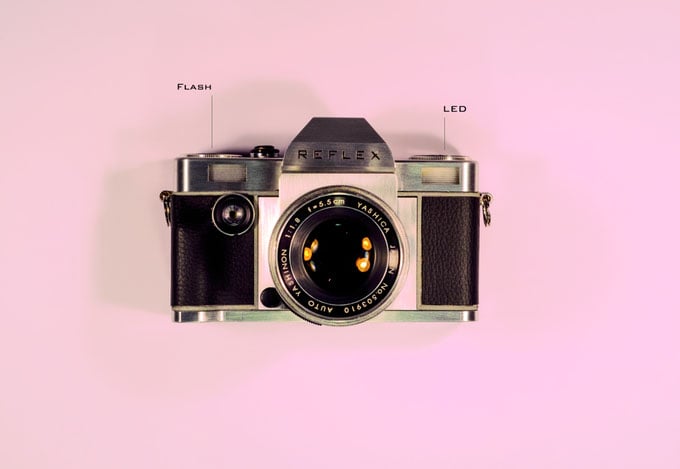 The Reflex system is also inspired by open source ideas — most of the hardware and electrical designs of the camera will be freely available on the Reflex website, allowing modders to create custom add-ons of their own making (perhaps through things like 3D printing). 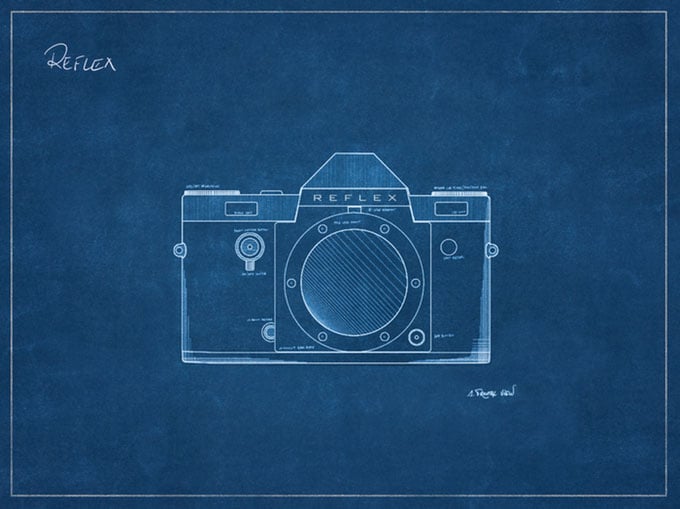 An additional idea (and stretch goal activated at £150,000) is having Bluetooth Low Energy (BLE) technology built into the camera, allowing it to be paired with smartphones so that metadata can be automatically recorded as you’re shooting on film (a push notification will also remind you to make notes for what you just shot). 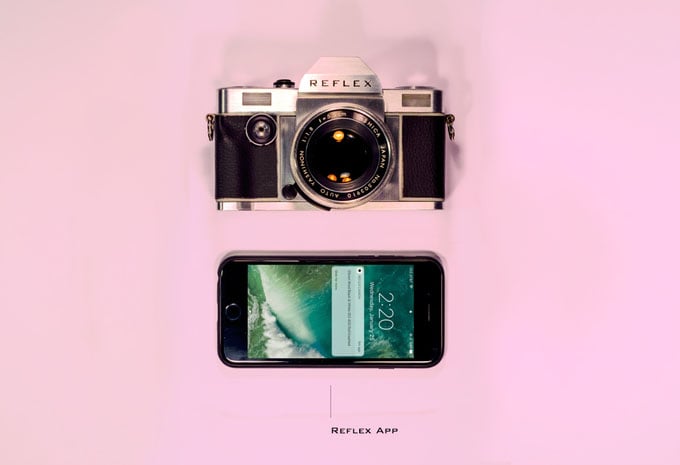 Here are some sample photos captured with the Reflex by testers around the world:

3/3. First test shots with the new shutter and mirror system used on Reflex using Agfa Vista Plus 200. Still a lot of light leaks and some shutter sync issues, but still this is a big step! – Portrait: Tim by Naomi Blair Gould #shotonreflex #ifyouleave #35mm #filmsnotdead #analog

2/3. Great weekend to get the Reflex prototype out in Brighton. Images by @nothingreallyends shot on Kodak Ektar 100 using a 55mm f1.2 Nikkor-S Auto #shotonreflex #35mm #filmisnotdead

3/3. Great weekend to get the Reflex prototype out in Brighton. Images by @nothingreallyends shot on Kodak Ektar 100 using a 55mm f1.2 Nikkor-S Auto #shotonreflex #35mm #filmisnotdead

Nikon to Shutter Its Sales in Brazil