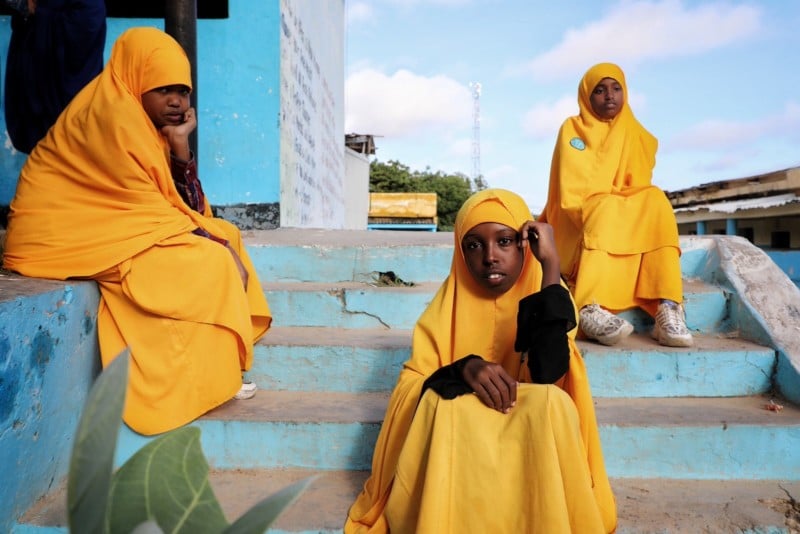 Breaking through the barriers of cultural and gender norms in Somalia, Fardosa Hussein shares what it took for her to be able to practice what she is passionate about — photography, videography, and journalism — in a place where such a career is viewed with hostility and is, at times, dangerous for women.

Hussein grew up surrounded and fascinated by the Afghanistan, Iraq, and Somalia news seen from the likes of Al Jazeera or the BBC, which she would watch with her father. He had a traumatic experience during the 1991 Somali Civil War and from listening to the news and her father’s memories and experiences, she knew from a young age that she did not want to let these accounts simply disappear with time. In doing so, Hussein realized that her calling would be to tell these and other stories and when she was older, and eventually enrolled in a journalism course to pursue that dream as her career.

During the latter part of her journalism studies, Hussein became worked with both the photography and video mediums purely out of necessity as part of the course. In her second and third year, Hussein — who was one of just two women in her class of thirty — realized that unlike all of her male students, she didn’t know how to set up a tripod or her audio equipment, let alone use a camera. In learning about the craft, she realized that photography and videography are what she wanted to pursue would do anything to achieve excellence there. 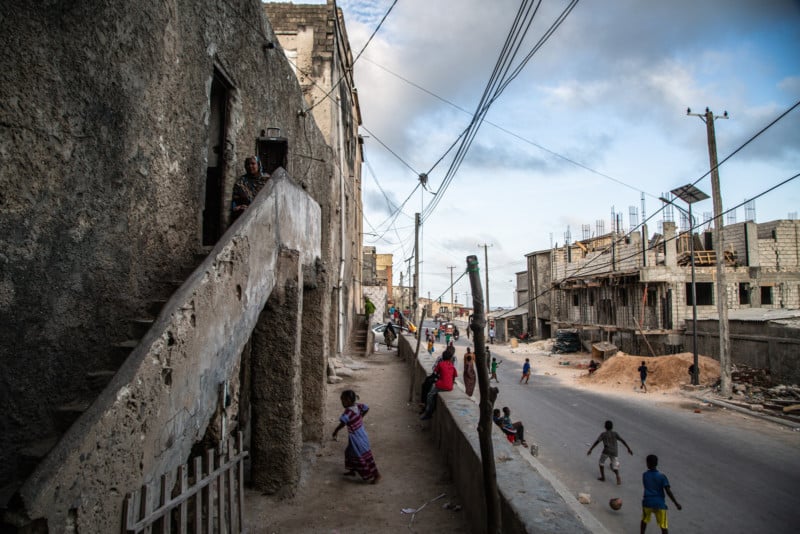 Her career choice is not a typical one for a young woman in Somalia. The professional stage for photojournalists is still heavily dominated by men while work-driven women typically take on a more traditional nine-to-five workload — “an easy desk job” — instead of freelance opportunities that would involve travel and meeting strangers across the country.

Hussein says it is understandable because “there aren’t many like us out here,” not necessarily because women don’t dream of a career like this but because parents don’t tend to be supportive enough to enable it.

After finishing her studies in 2017, Hussein took a year-long break at home. During this mentally challenging time, as expected, her career path was challenged by her parents but the belief in herself and the innate desire for creative expression persevered and pushed Hussein to pick up a camera and start creating. She didn’t feel the urge to go out and shoot elaborate or “impressive” work and instead started to capture what was easily accessible to her at the time which was primarily her sisters. 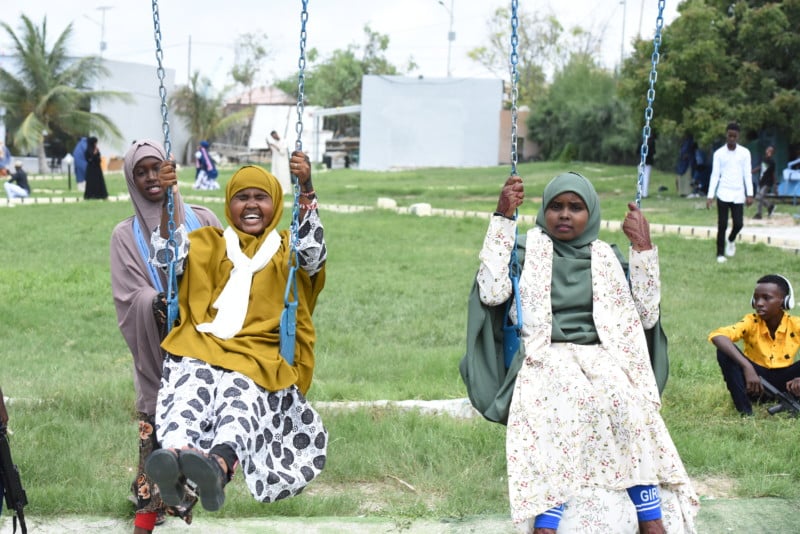 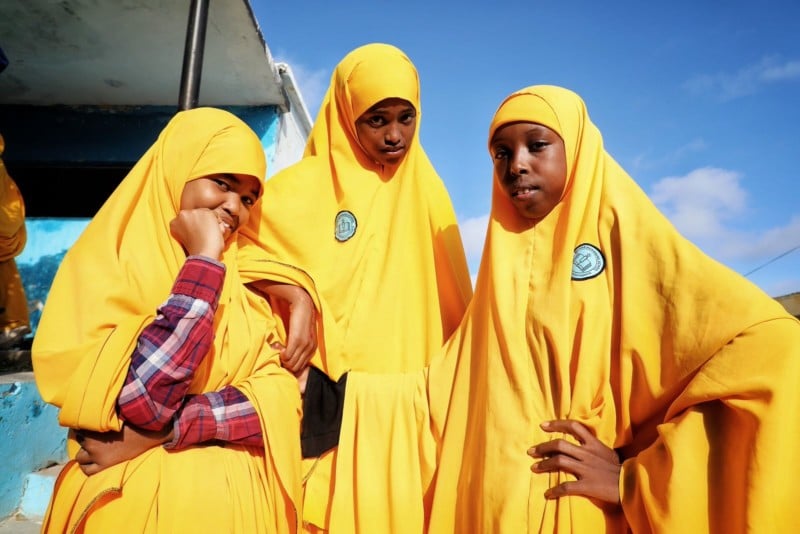 The sisterly bond gave her the unique opportunity to enter a private space that is often restricted to men and allowed her to start a documentary project that observes the personal moments in her twelve sisters’ lives, just using her iPhone 7 at the time.

Hussein tells PetaPixel that she realized that she has hardly any photographs of herself from when she was young, so her project — now grown to be long-term — aims to capture her sisters growing up and entering adulthood so they do not find themselves in the same position she did. 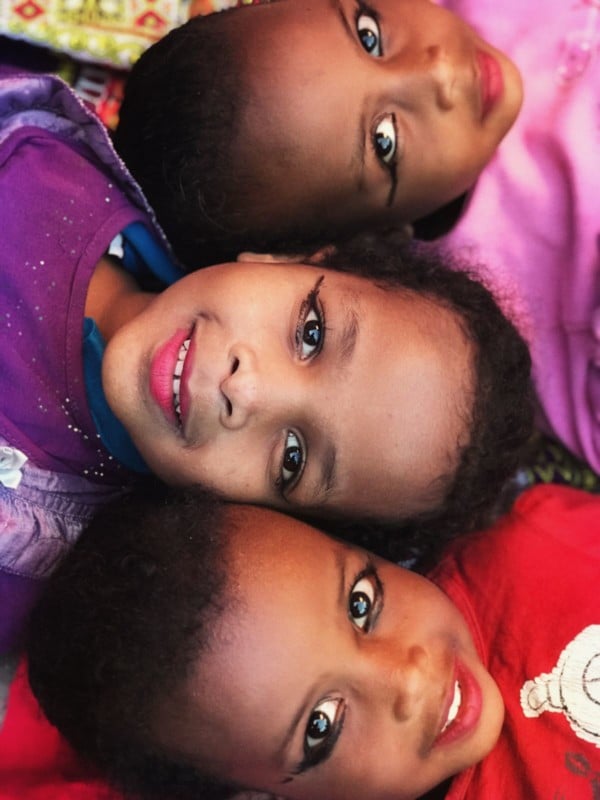 As the only one in her large family to do something like this, her sisters, after seeing some of the first images and prints, grew more confident in how they perceive themselves, which is important for young women growing up. Not long after, they were eager to get in front of the camera and still are. They see it as something new, exciting, and out of the norm.

“I am using my sisters as a way of seeing myself as a child through teenage years and adulthood,” Hussein says.

Once her youngest sister — who is currently four years old — turns twelve, the project will conclude. After watching Hussein photograph her sisters, her mother also asked if Hussein can document her, albeit without sharing the images in public space. This deeply personal body of work kick-started Hussein’s Instagram page which eventually helped her land her first client in Somalia. 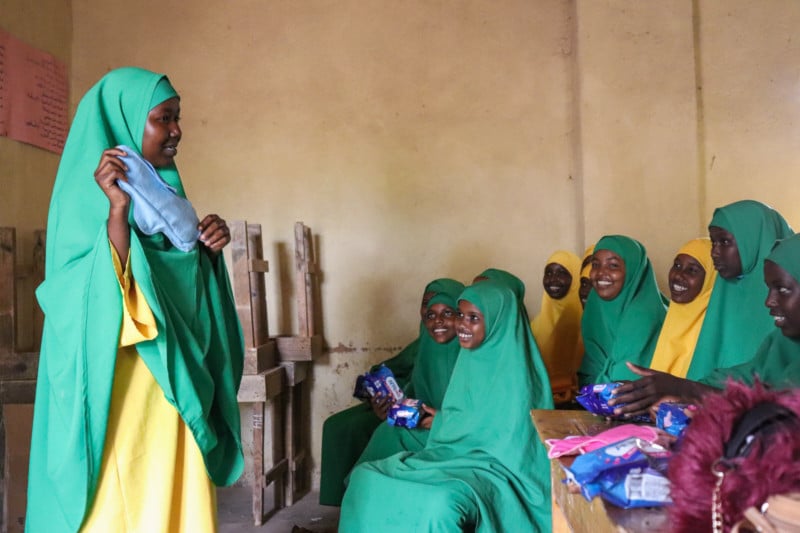 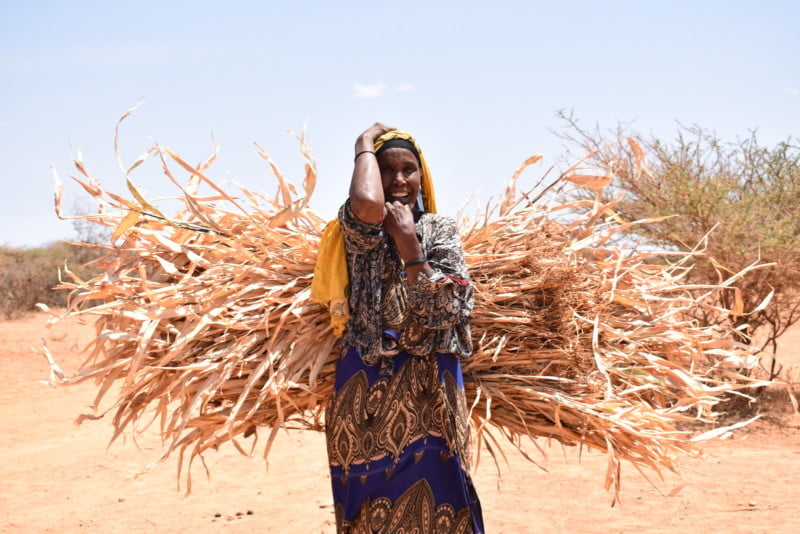 Hussein has found photography to be an incredibly impactful way to document the culture and lives of people instead of being restricted to the written word. This has also been evident by experiences of the Somali diaspora, with people approaching Hussein and thanking her for using this visual medium to share what unfolds in the country, particularly in the more restricted and inaccessible areas that don’t receive much coverage. 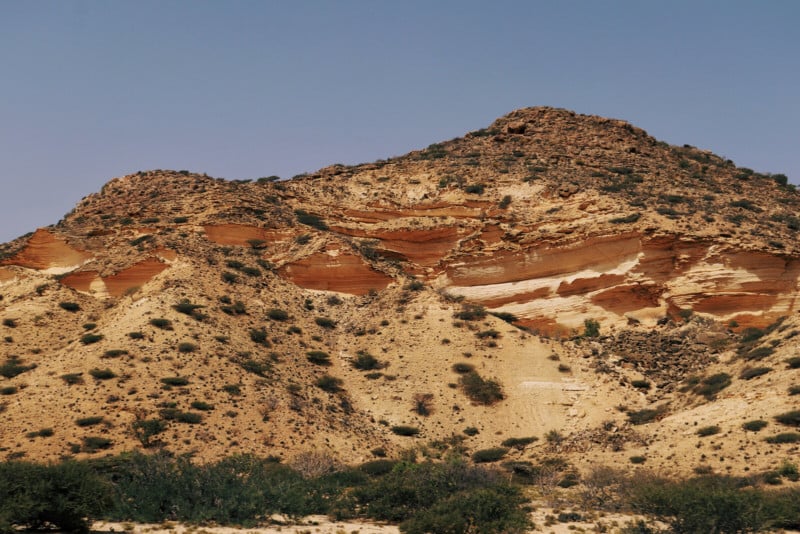 The challenges of being a woman photojournalist in places such as Mogadishu, the capital of Somalia, don’t necessarily outweigh the benefits of having access to private women-dominated spaces that male colleagues wouldn’t be able to reach. There are usually next to no protections for her as a journalist, and as a woman in the field, she is more likely to experience harassment, verbal abuse, and shaming.

It takes strength and courage to work through these challenges, but Hussein finds it a privilege to work with local people and make genuine connections, not just treat them as subjects that are quickly forgotten. This is in stark contrast to some photojournalists, especially Western ones, who may visit a place like Somalia and only touch on the very surface before returning home. 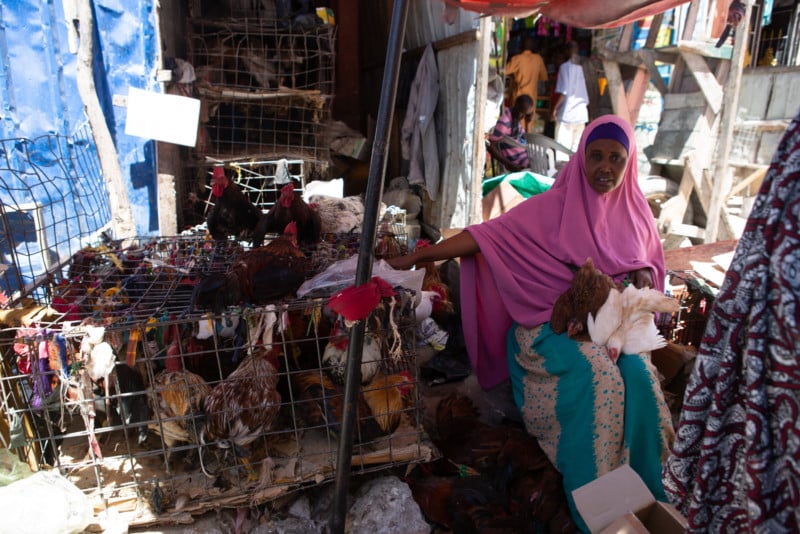 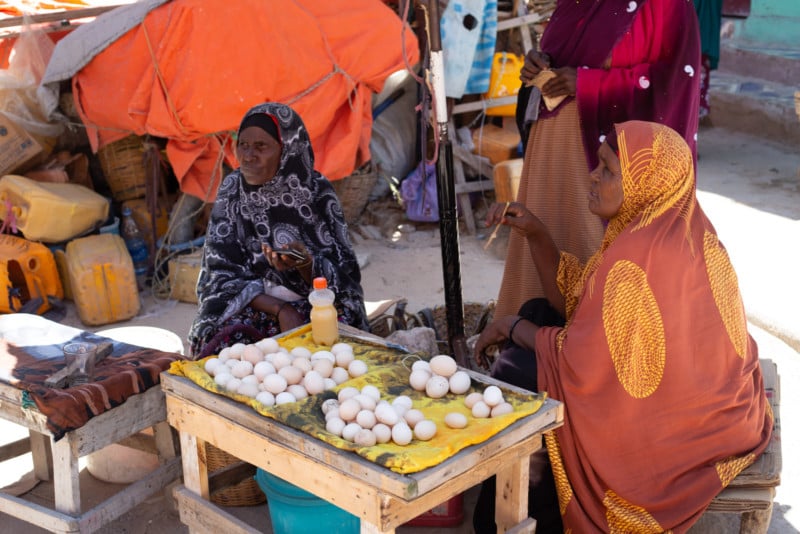 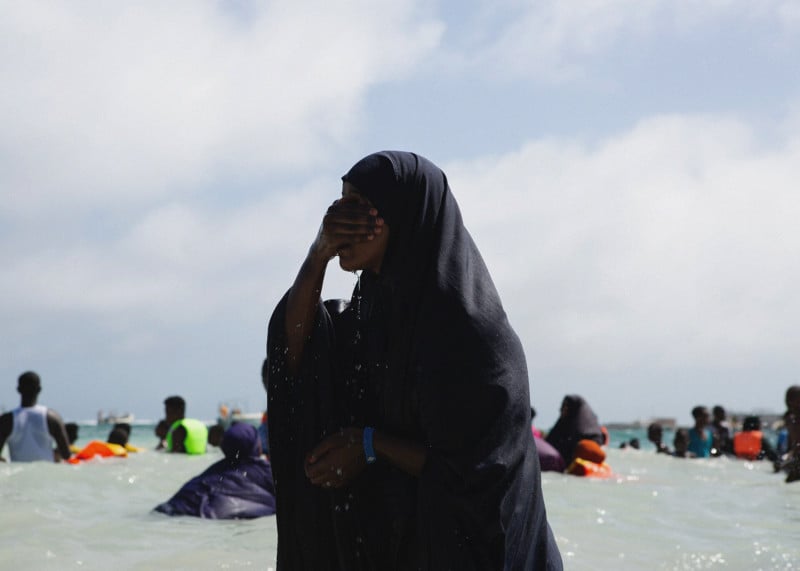 Hussein finds that her male colleagues in the industry tend to focus more on current political news stories — with the goal of pitching those to international media — and rarely take on long-term social issues and localized stories that explore certain parts of the smaller communities and the lives of their people, particularly those of women.

“Every time I go into a woman’s house, one of the things they appreciate is the fact that they can openly talk, they can openly say the things that affect them, and they would be uncomfortable talking about these to a man,” says Hussein. “This is very valuable to the story you tell.”

When thinking about her future, Hussein doesn’t plan to move away for work. Instead, she wants to reclaim what has been lost in the 30-year long war and feels that it is her sole responsibility to archive these local stories through her photography for future generations.

“There is a lot of history that has been erased because of the war,” she says. 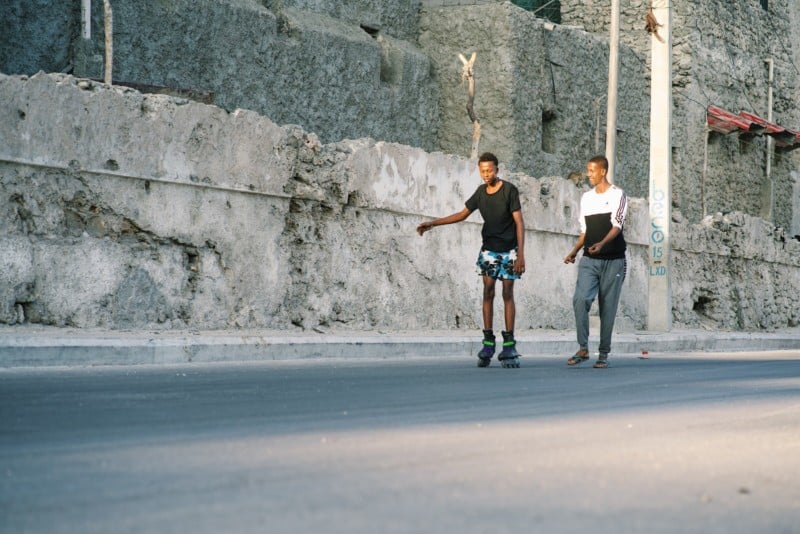 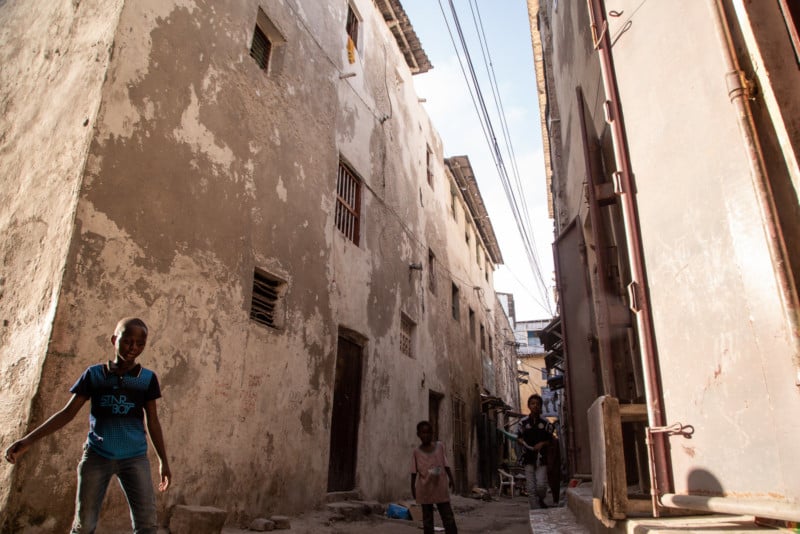 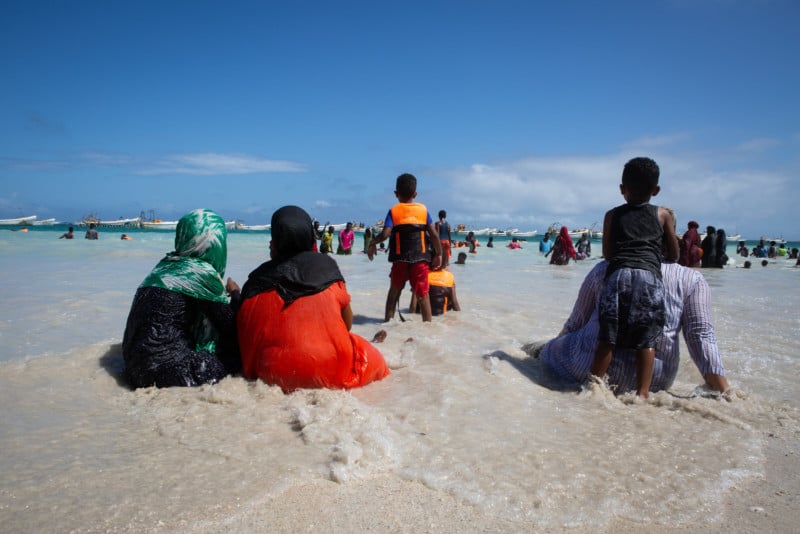 Equally important are the opportunities for young girls and women in the country. During her downtime, Hussein continuously works on a proposal that is seeking funding to enable her to set up regular workshops so she can educate other girls and women on the professional possibilities in the world of the visual medium. The cultural complexities are not easy to ignore, and a lot of work needs to be done to make this industry more accessible to women.

Without intending to sound cliché, Hussein has found that belief in yourself is important for anyone who wants to pursue photojournalism but fears the unknown. It takes a lot of mental strength to quieten not just the voices in your own head but also those from people around you who may not be supportive. After that, the ability to connect to people will open up many doors, more than technical precision and a particular grade of equipment will.

“If you have something you believe in, if you think this is what you love and this is really important to you, you have to support, encourage, and push yourself. If you don’t do that, no one will come and do that for you. It starts with you, first of all.”

More of Hussein’s work and projects, such as “Action Against Hunger” which explores how women fight malnutrition in the community, can be found on her website and Instagram.

Image credits: All images by Fardosa Hussein and used with permission.