Musician and YouTuber Tucker Tota has released a nearly one-hour-long video where he breaks down Bo Burnham’s comedy special “Inside” and offers his thoughts on how he believes it was produced.

Comedian Bo Burnham recently a new comedy special for Netflix aptly titled “Inside” which was filmed entirely by himself while under lockdown during the Coronavirus Pandemic in 2020. One of the tracks, “White Woman’s Instagram,” is a particularly deft parody of Internet culture.

The funny and brutally honest one-man show has won praise from both fans, celebrities, and videographers/creatives alike due to the specials all-too-relatable content and straight-up “raw” video used in the special. While most argue that the comedy special deserves every bit of praise it has been receiving, how Bo managed to put this all together by himself is an equally impressive work of art.

“I think Bo Burnham’s Inside is like a master class in DIY video production,” Tota says “so I’d like to go through it bit by bit and explain how I think he pulled everything off from a technical standpoint.”

Throughout the reaction and discussion video, Tucker breaks down the framing, tools, gear, and even software he believes Burnham used in many of the shots to get the particular looks achieved in the special. Tota even includes links to the products — as best as he is able to identify — for those interested in calculating what it cost to put the production together. Many of the items he links to are incredibly cheap given the scope of the production, such as the $15 headlamps, $20 disco balls, $30 LED light panels, and even some “normal” smart lighting like Philips Hue LED light bulbs. Tota also goes through some of the recording techniques — such as digital zoom, timers, and software queues — that he believes Burnham employed to sync his rants and reactions precisely throughout the special. Tota even explains how he believes the lights were set up based on clues he sees in the recordings. 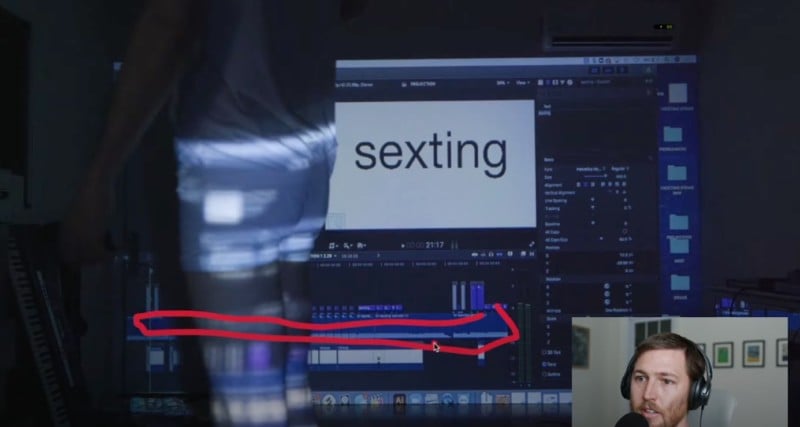 Some keen-eyed viewers may have already caught some of the behind-the-scenes peeks that Burnham provids throughout the special, but Tota makes sure to pause and expand on those moments including how during the “Sexting” song, the projected video was assembled in Final Cut Pro and likely was not even a fully exported movie file but rather just assembled in the app and set to a full-screen preview to save time and effort on Burnham’s part. There is a great deal of information presented through the full 49-minute video and even if his guesses are not exactly right, they still provide an excellent explanation of how the practical effects, lighting, editing, and sound design could have been put together and how any at-home creator can mimic them.

Burnham’s album “Inside” can be streamed for free across different platforms, has been recently added to Spotify, and can be found on his website.