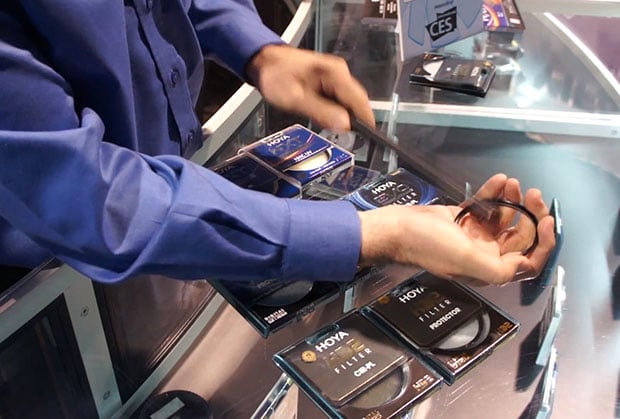 At CES 2013 earlier this year, Hoya showed off a new series of lens filters called the HD2. The main feature of the filter set is its strength: each filter uses hardened glass that can take a serious beating without getting damaged or shattering.

Company reps at the Las Vegas show had an attention-grabbing way of demonstrating the strength of the glass: they would whack it repeatedly with a pipe. Check out the demo in this video (it’s brief, and starts at around 47 seconds in):

Hoya says the glass is a proprietary L37 chemically hardened optical glass that’s four times stronger than ordinary optical glass. The glass is also repellant against water and oil, and resistant to scratches and stains. It doesn’t shirk on image quality either, as it has a 8-layer multi-coating for “for best in class light transmission.”

You can pick up one of these filters through most camera shops and online retailers like Amazon. Prices start at around $55 for a 37mm UV filter up to $200 for a 77mm filter.

(via PopPhoto via The Phoblographer)

Update: The Hoya rep in the video, Michael Burnham, tells us that what you see is indeed a metal pipe. It’s a column from a Slik Sprint PRO-II tripod that has a hard plastic end cap. Burnham says the exact same strike was enough to break competitors’ lens filters.