Sometimes I think New York is a city with a perpetual identity crisis. You can visit or live here for days, months, or even years, and it will never be exactly as you left the next time you return.

Businesses are opening and closing. Neighborhoods are dramatically gentrifying. Bodega offerings follow current food trends. (Newsflash: there is no way there was that much seltzer at your local corner store five years ago.) The city requires you to give up a bit of control if you’re going to fully appreciate it. And few know this as well as John Frattasi.

A commercial photographer and filmmaker, John has always drawn inspiration from the city he was born and raised in. As a third-generation New Yorker, he often heard stories about the city from the post Depression era through the baby boomer era in the sixties and seventies from this family.

Growing up he also naturally developed his own unique relationship with the city. From riding the subway as a kid to being a young professional all the way up until now, he’s seen and experienced his own evolution of New York City.

How can you effectively capture something that’s ever-changing? That’s where the idea for Velocity, his personal project came about.

“Velocity is a depiction of the modern-day urban landscape of New York City and its rapid development in the 21st century,” he writes. “Inspired by the city’s vibrant colors, stark contrasts, and perpetual ‘in-between’ moments often overlooked throughout its day to day life, the images explore the interconnection between its inhabitants and the ever-changing architecture of a city soaring into the future.”

I recently sat down over Zoom with John to talk more about the project and talk about the city we both care so deeply for.

The following interview was lightly edited for clarity and length. 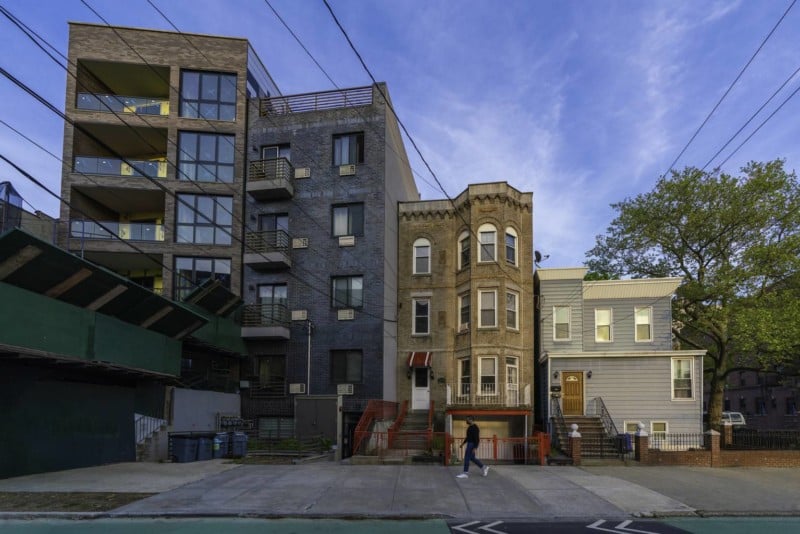 Caitlyn Edwards: Can you share a bit about how the project came about?

John Frattasi: About four years ago I really started to think about the innate theme of change in New York City. I started to pay more attention to what was happening across different neighborhoods and the contrast between new construction buildings reflected in the city’s architecture, and the more traditional features like fire escapes and pre-war buildings. It began to dawn on me that New York is perhaps undergoing its biggest wave of development since the arrival of skyscrapers in the 1920s and 30s.

And while change is inevitable in all aspects of life, it’s a really big part of being a New Yorker. You have to embrace that if you want to live here. The main idea behind the project was to capture some of the change that’s been happening in real-time… And that change, while painful at times, is also part of what makes New York so dynamic and truly one of the most exciting cities in the world.

Sometimes it feels like photographing New York is photographing the Mona Lisa and finding a perspective that hasn’t been shown before is a big challenge. So I thought “Ok. How can I sort of shift a perspective on one of the most iconic and over photographed cities in the world?” I just started to explore different neighborhoods in my free time with this idea of “NYC in flux” on my mind. CE: What do you hope the project will evoke in people?

JF: Well, these photographs aren’t meant to cast any judgment on New York for what it’s becoming versus what it’s been. These really are just observations through my lens. I wanted to make images that convey some type of movement across the change spectrum, whether that’s the beginning, middle, or end. That could be as subtle as the hardware store in your neighborhood going out of business and six months later becoming a hip bar or restaurant. Or something as big as that massive shiny building on Front Street that now completely interrupts the iconic view of Manhattan from DUMBO. I feel like everyone can relate to this project on that level, but I guess my hope is to engage viewers to look at the city a little bit differently.

Change sometimes feels like it’s just unrelenting in New York City; just how often things get torn down, built up, and just constantly refreshed. As a New Yorker living with that constant evolution, it’s easy to miss sometimes. Part of my goal is also to capture something New Yorkers might normally overlook. CE: Working for brands like Samsung, you do a lot of commercial work. This story is quite different for you. How was the experience overall? Are there things you struggled with?

JF: Well I love photography in all of its forms and consider this project a synthesis of different things I enjoy as a photographer. Velocity has no one single identity. It combines some spontaneous elements of street photography with a more structured approach to architectural photography.

Some scenes I approached with a very specific frame in mind at a very specific time of day. Sometimes I waited for that light, that train to pass. Other times I just happened to stumble upon an interesting place at the right time. The mix really helps make this exciting to work on as a long-term project. CE: Do you have one favorite image from the story? What does it mean to you/what’s the story behind it?

There are certain images that really have that old and new juxtaposition and I really love some of those, but I think viewers also need more.

That presentation of an old brick building next to some shiny, modern building resembling a spaceship, while it does tell a story, my goal is to make images that have more layers to them. There’s also a huge emphasis on light. I love those rich, detailed blue skies. I also just want someone to look at some of these scenes in a fleeting moment and think, “Oh, wow, that’s beautiful.” Because THAT is New York.

I guess I do have a few favorites though. There’s one photo I took in the Bed-Stuy section of Brooklyn, which has the guy with the hood walking by. There’s a house that’s just been boarded up behind him and while I’ve never been back to that exact location, I’m sure that house has since been sold and renovated and that street probably looks very different, even just a couple of years after taking that photograph. CE: You mention that the project is about New York’s inhabitants and the city’s ever-changing landscape. I noticed a theme of anonymity regarding the people in your images. Was that intentional?

JF: My approach to how I shoot this project has evolved over time. I try to stay open. I love having people in the photographs, but I don’t really want any one image to be too much about that character making a statement. It’s really about how that person appears in the greater context of what’s happening in a neighborhood.

Part of being a New Yorker is being in your own world, right? You’re not always paying attention to all the change because it’s so ubiquitous.

So you’re walking to the subway, you’re on the phone, you’re walking your dog, just going about your business. Even tourists who are usually running around Manhattan. One of my favorite shots in the project is where there’s this monstrosity of a construction site behind with a tour bus in front of it. What other city starts a tour in front of a scene like that? 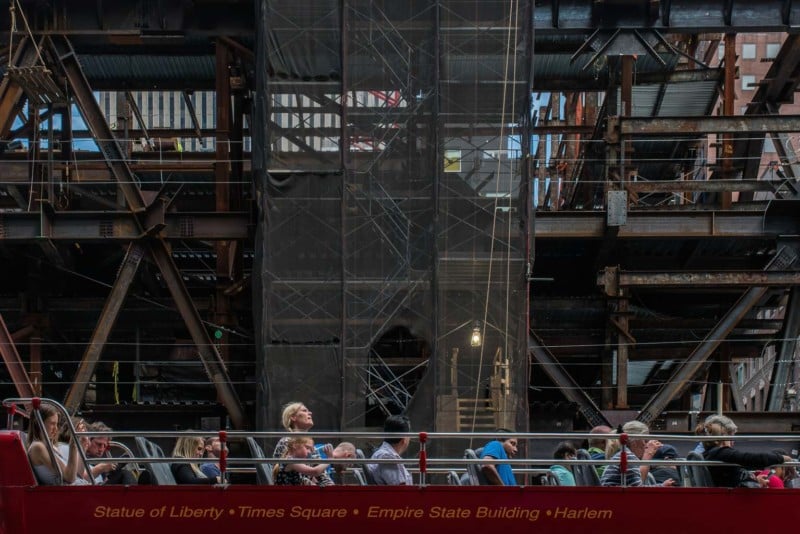 CE: This is a sensitive question. This past year, we’ve all obviously experienced a tremendous amount of change. There are so many unknowns about the future of the world, but I think we can agree that New York has been disproportionately impacted.

For you, someone who was here for major events like September 11th and Hurricane Sandy, do you think that has impacted your outlook on change? Made you more aware of it?

JF: You know, living in New York, I have my own little window of experience growing up in an outer-borough, but I’ve still seen how the city has changed. Having been here for so long, I’ve lived through some times of crisis like the ones you mentioned. And during a crisis, as weird as this sounds, New York has a way of being strangely at its best in some ways. They can bring out a greater sense of community and unity amongst New Yorkers which has always made me feel proud

I think living through those moments has instilled a confidence that the city will always recover. Even with COVID-19 and New York going through probably the biggest challenge in our lifetime—the city is in pain with so many different neighborhoods and businesses and people being impacted simultaneously—I believe New York will prevail and will emerge as something even better. As a friend of mine said recently: “The New York you know is gone, the New York you love will still be here.”

About the author: Caitlyn Edwards is the Community Marketing Manager at PhotoShelter, which regularly publishes resources for photographers. The opinions expressed in this article are solely those of the author. Edwards has a degree in Peace & Conflict Resolution and is religious about black coffee and great wine (but never together). This article was also published here.

Image credits: Photographs by John Frattasi and used with permission