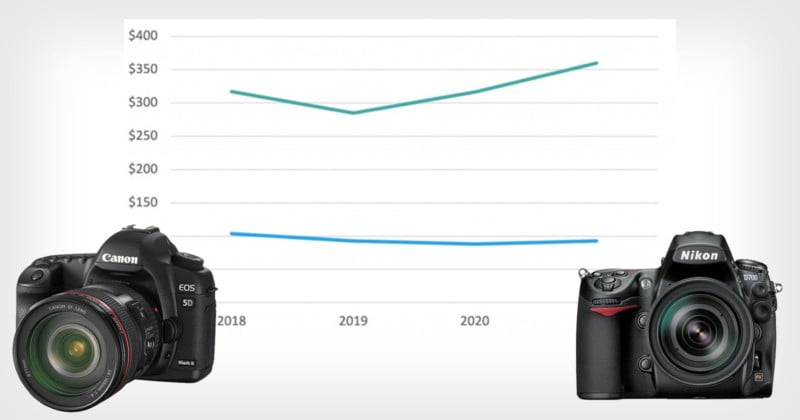 Canon and Nikon have ruled the DSLR landscape for a couple of decades now, but which one has proven more valuable in the long run? Let’s set the scene and then crunch some numbers.

While the DSLR has roots that go as far back as the mid-’80s, the first body that made waves was the Nikon D1, released in 1999. This professional-grade camera started a movement, and by the mid-aughts, DSLRs were dominating the consumer market.

Naturally, a host of third-party manufacturers got behind those systems as well, which rounded out the line-ups with affordable lenses and plentiful accessories.

For both Canon and Nikon, their DSLR lines were by far their most profitable. In 2009, Canon profited four times as much from DSLRs than from their line of compact cameras. Similarly, Nikon earned more from DSLRs than any other product line.

After a decade-plus of double-digit growth, 2012 was when we officially reached peak DSLR.

We should all be familiar with what happened next.

In the two-thousand-teens, it all changed. Along with several economic factors, the ascendance of capable smartphone cameras started eating up the entry-level DSLR market, and advancements in mirrorless technology, led aggressively by Sony, shifted the momentum away from Canon and Nikon in the professional and prosumer sectors too. This started a period of decline for the DSLR which we’re still experiencing today.

Now, before we pour one out and shed a tear in memory of DSLRs, let’s hit pause.

From our perspective at KEH, the used DSLR market is a vibrant sector, and there are plenty of people who still proudly fly the DSLR flag at full-mast. We don’t expect that to change for a while.

However, since we’re at this pivotal point, I thought it might be a good time to look back and see which DSLR systems, Canon or Nikon, has retained its value best over the years. But since Canon vs. Nikon is always a delicate topic, let me make my intention clear.

This isn’t to justify your decision to pick one brand over the other, or to determine who made the better investment—that should be measured by the amount of enjoyment and good photos you’ve been able to squeeze out of your gear, not by how much the gear’s worth on the used market after a few years.

I’ll go out on a limb and say that if you invested in either one of these systems, you got your money’s worth. Both Canon and Nikon make great gear, there’s no arguing that. Going back in time to alter your choice won’t change any outcome.

Now that we got that out of the way, let’s have a look at some of our data.

Let me note that in order to keep newer models from skewing our data for this exercise, we only included models which we carried both in 2018 and in 2021. Luckily, this makes up the bulk of DSLR gear. Looking at average buy prices over the last three years for Canon and Nikon DSLR camera bodies (which collectively includes both cropped and full-frame sensor cameras), the data shows that both experienced a dip but bounced back. Nikon prices, however, bounced back better, and are now at the same level as 2018, while Canon hasn’t bounced back quite as well—it experienced a 9% decrease overall. When we look at average sell prices for DSLR bodies, it was a similar story, with Nikon bodies increasing in value by 9% in comparison to Canon’s 4% increase. It may surprise some that these figures are increasing at all, but we’ve certainly seen it coming—people should pump the brakes on declaring the DSLR undesirable, that’s for sure.

DSLR bodies only tell part of the story, as most photographers invest more on lenses than bodies over the years. Let’s look at DSLR lenses as well. We included third-party lenses from manufacturers like Sigma, Tamron, Zeiss, Voigtlander, and more. 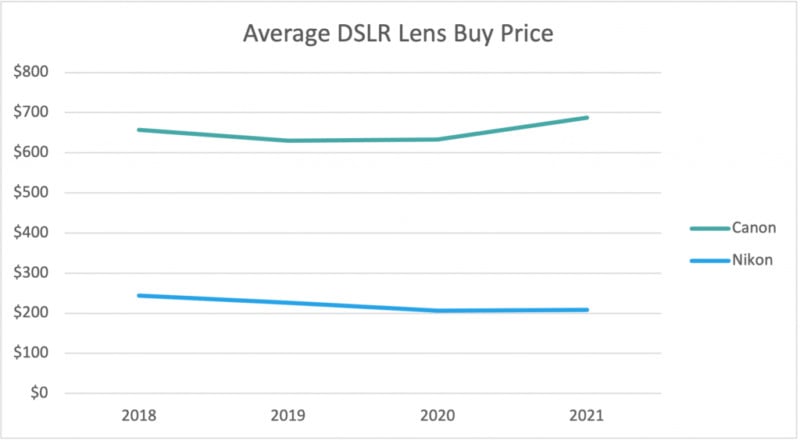 DSLR lenses are where Canon shooters have fared better in their investment. There was a buy price increase of 5% over the last three years, while Nikon has experienced a 15% drop in value. 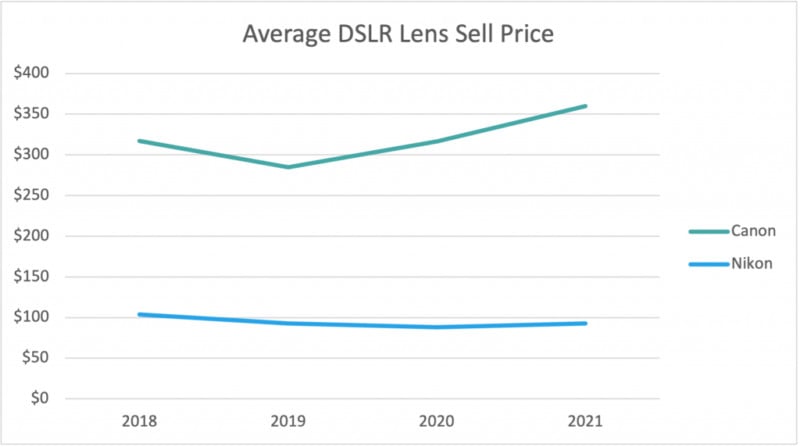 Sell prices are even better for Canon DSLR lenses, seeing a 14% increase, while Nikon has dropped by 11% over the last three years. As many photographers adapt DSLR lenses to their new mirrorless cameras, this is where Canon’s current biggest slice in the market has helped out, considering Nikon has also shrunk considerably.

This isn’t all bad news though, as those great Nikon DSLR lenses are now cheaper than ever.

If you want to get into the Nikon DSLR system and intend on staying in for the long run, now’s a good time to do it. While, if these numbers hold, investing in Canon lenses will give you a better return when trading in for a new system down the line.

Let’s look at DSLR accessories next, which can include batteries, adapters, lens hoods, grips, converters, prisms, and more. 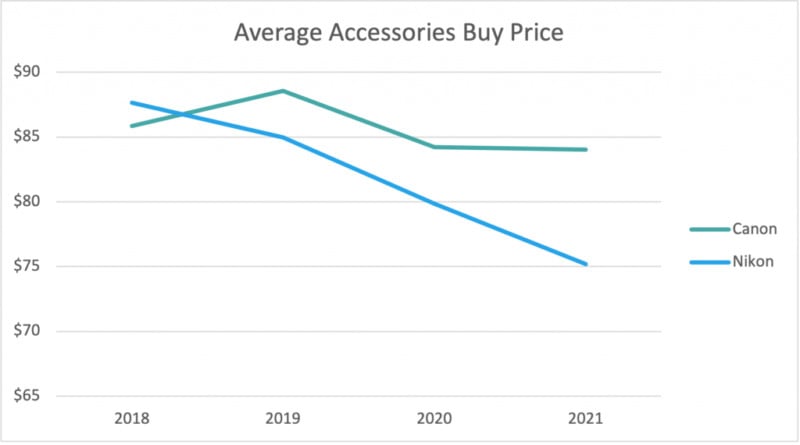 Again, on the buy-side of things, Canon has held up a bit better—only dropping in average price by about 2% over the last three years, while Nikon has fallen by 14%. 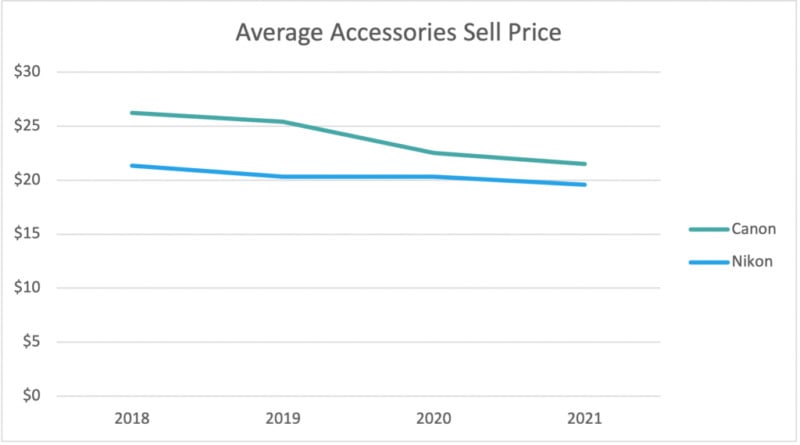 On the other hand, the sell price tells a slightly different story, as Canon has seen an 18% drop, with Nikon is steadier with only an 8% decrease. A lot of different factors can lead to this, perhaps a discrepancy in supply of Canon accessories over Nikon is a factor.

DSLR lighting is another category where photographers invest heavily over the years and have to buy system-specific gear, whether it’s on-camera flashes, strobes, triggers, lighting accessories, and more. Once again, we included third-party brands that cater to these systems in our data here as well. 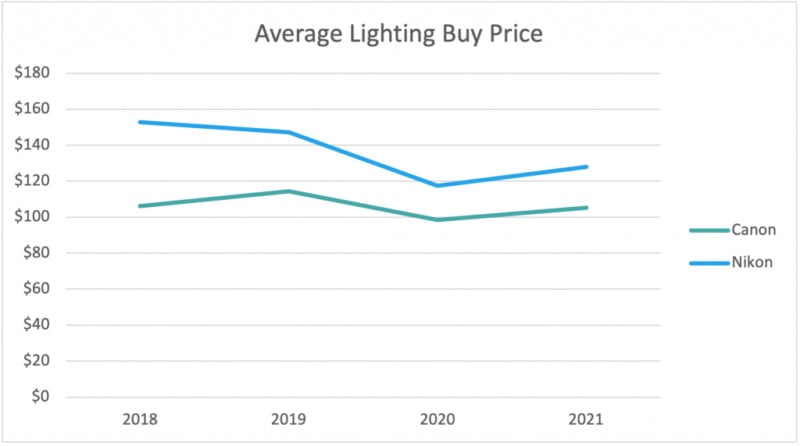 For this category, we saw a more consistent change over buy and sell, with Canon coming out on top with only a 1% drop for average buy price, while Nikon fell by 16% over the same period. 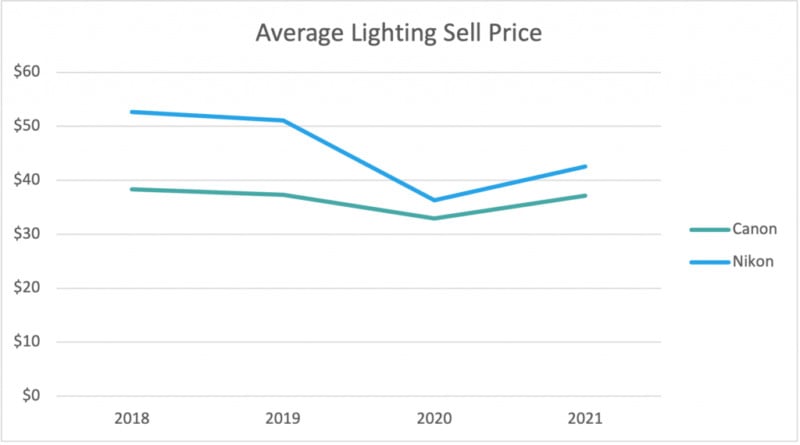 On the sell side, Canon fell by 3%, while Nikon experienced a 19% drop. Since lighting products mostly work on both DSLR and mirrorless systems for both Canon and Nikon, we have to wonder if the drop in value here can also be attributed to photographers switching over to other systems like Sony and Fujifilm.

To recap, here’s how it all shaped up over these categories. The highlighted numbers indicate the better hold in value and as you can see, each brand held its own in different categories. The Ultimate Guide to Fashion Shoots: From Idea to Magazine Submission