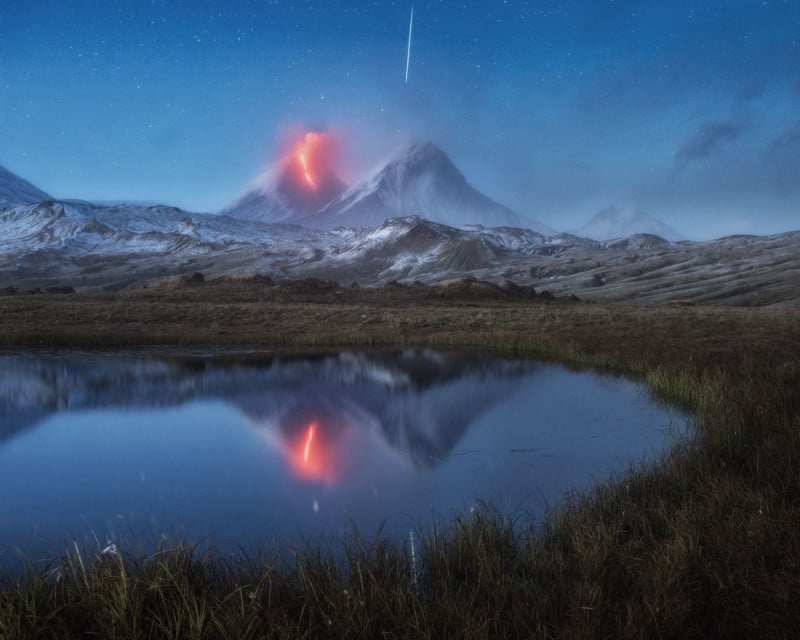 Sometimes in landscape photography, nature smiles at your camera and surprises you with much more than you were hoping to capture. This photo is one example of that. While photographing an erupting volcano, the photographer saw a shooting star flash across the sky and steal the spotlight in the frame.

Back in September 2016, photographer and Nikon ambassador Daniel Kordan was leading a photography workshop at Klyuchevskaya Sopka on the Kamchatka Peninsula in the northeast corner of Russia.

Rising to an elevation of 15,580 feet (4,750 meters), Klyuchevskaya is the highest mountain on the peninsula and the highest active volcano across all of Eurasia. It’s considered a sacred mountain by some of Russia’s indigenous people, who believe that it marks the birthplace of the world.

Klyuchevskoi’s first documented eruption was all the way back in 1697, and the volcano has been regularly erupting ever since, so it’s a great location to visit if your goal is to capture a volcano eruption without putting yourself at much risk.

As he was photographing a minor eruption of the volcano with his students, Kordan lucked out and managed to catch a meteor as well.

“We stayed with my group at camp close to a small pond,” Kordan tells PetaPixel. “We caught reflections of volcanoes and accidentally I also caught a shooting star during a long 25-second exposure.”

The composition turned out to be perfect, with the glowing trails of both the lava flow and shooting star mirrored in the foreground pond.

While there are sometimes great opportunities to go out and intentionally capture photos of shooting stars — during the annual Perseids meteor shower, for example — other times the shooting stars unexpected photobomb long-exposure photos and create happy little accidents like Kordan’s beautiful shot.

Kordan is one of the most-followed outdoor photographers on social media, boasting over 1.6-million followers on Instagram. You can also find more of the artist’s work on his website, Facebook, and 500px. Prints of Kordan’s photos are also available here.

P.S. We previously featured Kordan’s photos of an ice cave being lit by a flare and the Milky Way mirrored on flooded salt flats.

Update on 2/24/21: This article originally featured a similar photo by Dutch photographer Tomas van der Weijden, captured at the same time and place as Kordan’s photo. We previously shared Van Der Weijden’s version of the shot in 2016. The photo in this article has since been corrected to Kordan’s version. We apologize for the mixup. You can view Van Der Weijden’s version here and find more of his work on his Instagram page.

Image credits: Photograph by Daniel Kordan and used with permission