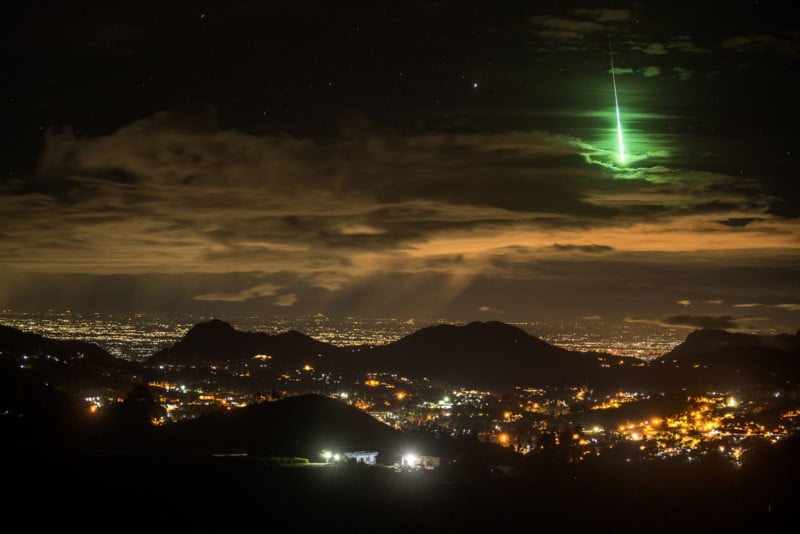 There are some types of photography that can be planned down to the tiniest detail. Capturing shooting stars? Not so much. This picture-perfect photo of a meteor is one of photographer Prasenjeet Yadav‘s most popular shots, but it’s also perhaps his luckiest: it was captured accidentally while he was asleep.

In October 2015, after winning a National Geographic Young Explorers grant, the Bangalore, India-based Yadav drove into the mountains near the small south Indian town of Mettupalayam to shoot a time-lapse project showing urbanization. Yadav set up his Nikon D600 with an intervalometer to capture a 15-second exposure every 10 seconds. Once everything was up and running, Yadav went to sleep.

The next day, while reviewing the 999 photos captured through the night, Yadav spotted a bright green fireball streaking down the sky and illuminating the sky in one of his frames.

“I was there, and that’s what photography is all about—being there in the right place at the right time,” Yadav told Wired in 2017.

“This is definitely one of the most memorable shots I have ever taken and also the first image that National Geographic published back in 2016,” Yadav writes. “Green Meteor’s greenish color come from a combination of the heating of oxygen around the meteor and the mix of minerals ignited as the rock enters Earth’s atmosphere.”

Yadav was originally a molecular ecologist, having earned a master’s degree in molecular biology and doing research for several years in India. But once he realized that his true passion was in storytelling, he took up a camera and became a photographer and National Geographic Explorer to help popularize ecological and conservation sciences.

Image credits: Photograph by Prasenjeet Yadav and used with permission