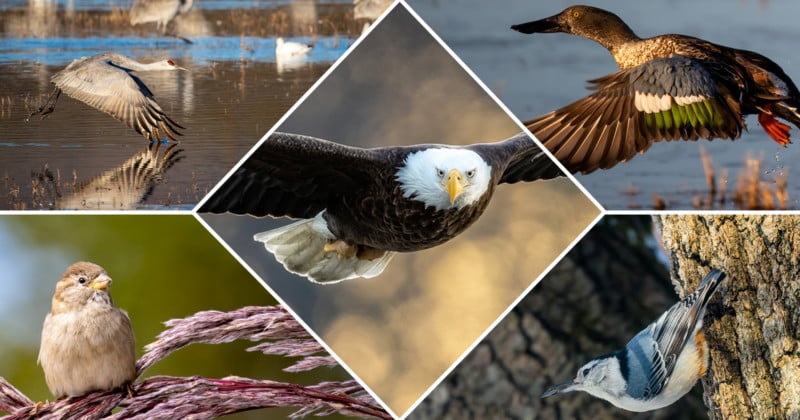 Drew MacCallum is Canon’s Technical Advisor and one of my go-to resources for complicated camera questions. I also happen to follow him on Instagram, which is where I noticed he started posting some stellar bird photos.

After seeing a plethora of incredible images make it to his feed, I decided to reach out to MacCallum to ask him about his art, which is the first time we’ve started a conversation that wasn’t based on questions regarding the technical specifications of Canon’s latest camera. It was a nice break from our usual highly technical talks. It turns out that despite his recent years as the voice for the nitty-gritty of what makes Canon’s cameras tick, MacCallum is a nearly 30-year veteran of the photography discipline.

“I actually started working for a portrait and wedding studio for a summer job in high school and the owner felt the best way for me to learn was to put me in the darkroom,” MacCallum tells me. “I knew nothing about photography. That was 29 years ago, and I’ve been in the professional photo industry ever since. I have worked for a lot of different studios, agencies, newspapers, magazines, and in camera stores before becoming a Field Educator for Canon in 2007.”

It’s really easy to paint these camera executives as just guys in suits, but MacCallum reveals that at least in his case, he’s just like us: a photographer and a lover of the art.

MacCallum tells me that over that period he has photographed a wide variety of subjects, from brides to babies and athletics to commercial beverage imagery, he’s pretty much run the gamut. MacCallum has even photographed the Super Bowl. There is no doubting based on his resume: the man has photography chops. Lately, however, he’s turned to birding.

“I guess photographing birds came from a love of going to airshows and for developing different skills I would need for various types of subjects whether its athletes, birds, or planes; managing exposure as the light changed, shutter speeds to capture that perfect prop blur of antique planes or trying to catch a team of military jets crisscrossing at the perfect moment. These are skills I felt always helped with the paying jobs – responding to changing light at social events or happening now news, players movement in sports or sometimes it’s just getting more familiar with the camera’s buttons and layout, so it becomes second nature,” he says.

“As a field educator, we did workshops all over the country, but, since I was based in Atlanta, Georgia at the time, I had the opportunity to work with some amazing photographers down in Florida where it’s pretty ripe with places to go for wildlife,” MacCallum continues. “The Everglades are filled with animals, so in my downtime, birding just kinda came about as a fun thing to do. I know lots of people are in it for identifying and logging various birds on their list, I’m generally just honing my skills and trying to capture a scene that many people just don’t get the chance to see.”

It should come as no surprise that MacCallum uses Canon equipment, seeing as he’s an employee. But still, I was curious what cameras he is leaning towards using for his bird photography.

“I often have both the EOS-1D X Mark III and the EOS R5 in reach. There are times where the optical viewfinder of the 1D X is an advantage as well as the 16fps mechanical shutter,” he says. “The EOS R5 tops out at 12fps mechanical and those extra frames can be the difference between wing positions and that perfect composition. Other times, with the extremely low light early in the morning, the EFV can be an advantage. Of course, swinging a large 600mm lens around, the lighter body of the EOS R5 is a bonus, too.”

Hearing about the 1DX was an expected answer, but when MacCallum mentioned he was using the R5 I was surprised as I did not have a feeling it was high on the list for birding cameras.

“I’m not one to pigeonhole (forgive the bird pun) a camera for what its capable of, I mean, I often have a friend right next to me who is shooting with an EOS Rebel class camera and is getting fantastic images,” MacCallum explains. “The reason I reach for the EOS R5 is the file size and AF abilities. The Animal AF that tracks birds’ eyes is pretty spectacular and not just on paper. With a 45 megapixel file, I have tons of cropping power – even with a 600mm F4 L IS III USM lens, it’s almost never long enough.”

Speaking of lenses, MacCallum was happy to share the optics he’s currently enjoying out in the field.

I asked MacCallum what autofocus settings he uses on the R5 and if there were any other tricks he recommended to get great bird photos.

“This is where the EOS R series cameras shine- not that you could not do this with the EOS 1D or other series cameras, but the EOS R5 goes to another level,” he responds. “I have three AF buttons set up on the camera: the AF-On button is my main (it’s just a natural position for me) it is set to Servo AF, Face Detect+ Tracking, and Animal preference (you can choose people or animals). Eye detection is enabled, and the Servo Case is Auto, believe it or not.”

“Just to the right is the AE-Lock button or the * as some know it,” MacCallum continues. “With the EOS cameras of late, there is a function under ‘customize buttons’ called ‘Register/Recall Shooting Func.’ I have the * button set for AF -Expand Area (the 4 squares) as well as ‘Tracking Sensitivity’ set to ‘Locked on.’ This helps keep the AF point hold onto the subject as long as it can and not jump to something else in the frame it sees.

“The third button is one I don’t use often but for specific results: using the same ‘Register/Recall Shooting Func’ this button is set to change the mode to Tv at 1/60th, AF-Expand Area (the 4 squares), and Locked On tracking as well. This button is my ‘panning button’ when I have a situation that I want to blur the background, I just need to slide my thumb over to that button and the settings change as long as I hold that down. I let go, go back to AF-On and the camera is back to the previous settings I had. This is a trick I learned from a sports photographer how he sets up his EOS-1D X mark III’s.”

“One technique I do push to others is setting the Initial Servo AF pt. This, at first, may seem a bit confusing, but it really does help your keeper rate. Normally, if left at the default ‘Auto,’ and when the camera AF Mode is in a ZONE mode (other than Spot, Single Point, AF Expand Area, or AF Expand Area Surround), the camera AF points will grab the first thing its identified. This may or may not be your intended subject and when photographing a bunch of Canadian Geese flying at you, for example, it may find the bird lower in the frame, when you intended to focus on the lead Goose.

“With Initial Servo AF Pt, you have a single point in your viewfinder that is the ‘starting point’ for your AF selection. The focus will start from that chosen point and then use the whole AF area of the frame as the subject moves through the frame. When you stop focusing on that subject, the AF point returns to your selected spot and is ready to start from there again. It really makes it much easier to get on target quickly,” he explains.

I asked MacCallum to describe to me one memorable photo he shot and how he managed to capture it.

“The image shown with the eagle coming straight at me was one particular moment I was glad to have the R5. It was really low light just as the sun was coming up. The eagle was in a tree in a favorite spot and as usual, it was very backlit, so it was pretty tough to see. When the eagle dropped down, I just happen to be watching and the AF just locked on before I could even tell the bird was in flight. I was on a monopod and had the 600mm mounted but as the bird got closer and closer you could see Eye AF just stay locked on – all I had to do was keep composition (easier said than done with an eagle flying at you at up to 70mph). Sometimes the Eye AF and all the tech feels almost like cheating, but I really have a new ‘favorite image’ at least for a few weeks because of the abilities of the EOS R5.”

Finally, I asked if there was any advice MacCallum could give to those interested in improving their skills as a photographer, and not just at birding.

“It really all comes down to practice, practice, practice,” MacCallum says. “I know the thought is that the camera will make a better photographer, and to some extent it can. However, the photographer should still hone their skills. A camera is a tool, just like a frying pan or knives. A chef has to perfect their skills to create a 5-star meal. I like to cook, and have great cookware, but I’m no 5-star chef in any way. Get out there and practice. Also, don’t let the weather hold you back, some of the best images have come from some pretty crappy days and animals don’t care much about the weather.”

It is wildly refreshing to see that a Canon employee is able to practice what he preaches, so to speak. I think that what is special about MacCallum is that he’s specifically tasked with explaining the most technical details of a camera, the aspect of the business that is perhaps farthest removed from art, yet he is a fabulously talented artist in his own right. You love to see it.

You can see more of MacCallum’s photos on his Instagram.

Image credits: Photos by Drew MacCallum and used with permission.