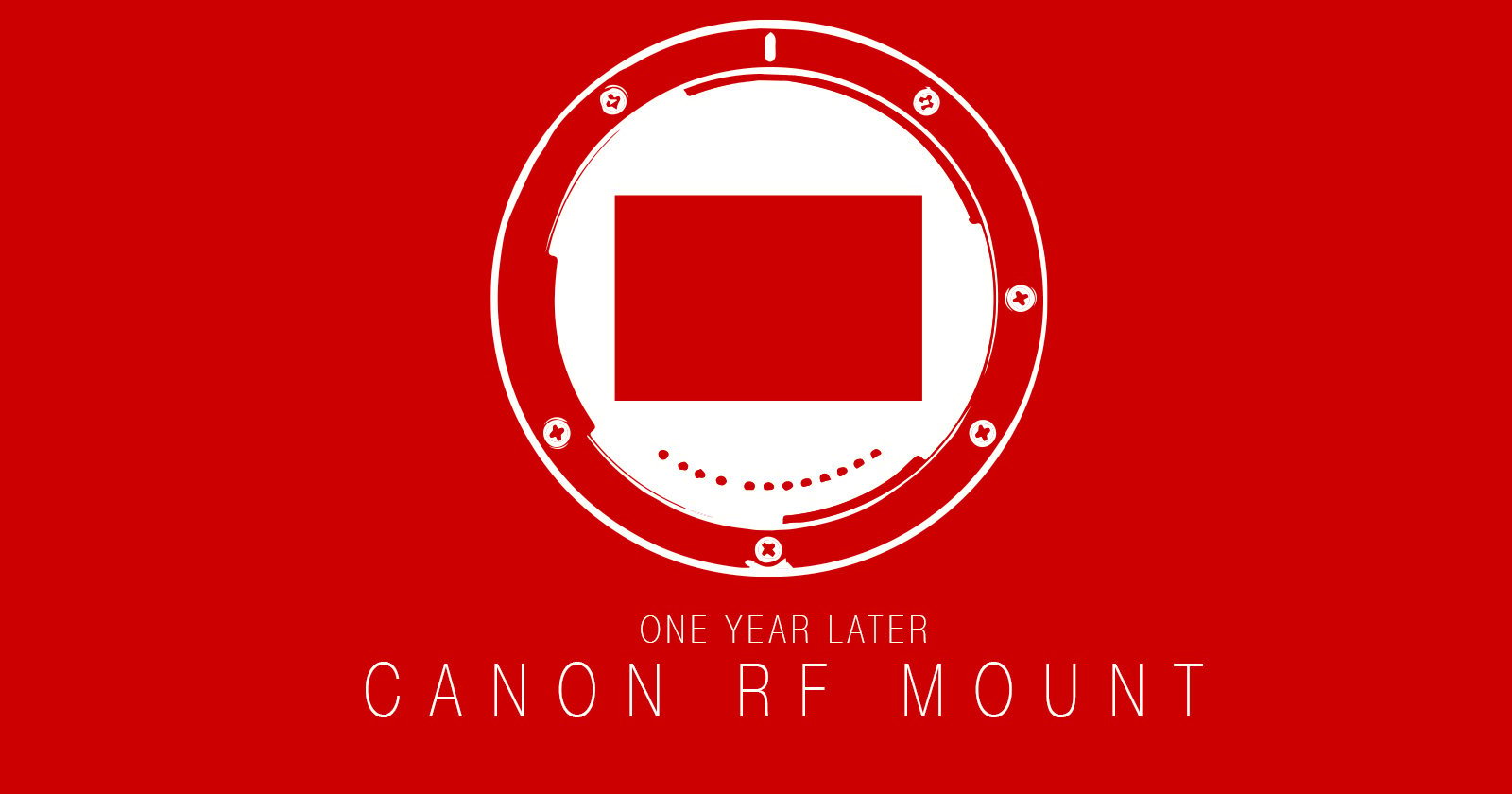 For Canon, Nikon, and Panasonic, 2018-2019 was the first year where they all truly “went for it” when it comes to full-frame mirrorless. All three released full-frame mirrorless cameras, and all three seemed to have different priorities with those releases. In this first of three segments, we’re going to take a look at each of these companies in their first year and evaluate where each of them stands today in what is now a very competitive market.

First on the docket is Canon, who released the EOS R and EOS RP along with the entirely new lens series based around their new mount: RF.

Canon’s strategy with the launch of the RF mount and the EOS R was very clearly “get the lenses right first.” The EOS R really felt like just a mirrorless take on the then already old 5D Mark IV, offering very little that separated it in form or function from its DSLR brethren.

As a user of the RF line for the last year as well as Canon DSLRs for years prior and speaking from that experience, I think it is fair to characterize the EOS R as a “good enough” camera that doesn’t rock the boat at all for newcomers to digital cameras, users of competitor hardware, or for those already deep into Canon’s ecosystem.

Looking back at it, the EOS R is kind of the, “oh yeah, it exists” camera from the last year. The biggest addition to the camera was the touch “multi-function” bar, and that is pretty much agreed upon to be a silly and unnecessary addition.

The RP was also unlikely to interest many PetaPixel readers either, being a lower-end camera that doesn’t move the needle much for advanced hobbyists and above.

From the get-go, Canon very clearly wanted to ease its DSLR user base into the idea of a high-end mirrorless camera without going too high-end or making anyone feel like they had to ditch their DSLR. At the same time, they needed to release a mirrorless camera outfitted with modern Canon technology to prove they were capable of doing it, both for investors and for the sake of the brand.

This is an incredibly challenging balancing act of goals. On one hand, you do want to move towards mirrorless because of its popularity and the advantages inherent with the system, but on the other hand, you have decades of lens ownership to account for with a huge number of users who have thus far resisted the temptation to leave Canon for another brand.

The last thing Canon would want to do is give another excuse to those people to try out a competitor, and moving too fast to an entirely new system is exactly what that would have done.

It could be argued the reason we have had to wait so long for a full-frame, serious mirrorless offering from Canon is that they wanted to avoid this type of decision among their user base for as long as possible. So when you look at it from that perspective, Canon’s choices do make a lot of sense from a business perspective.

“Change is always difficult, and changing a lens mount all together is a hard thing for people to do if they are invested already in a ‘system,'” said Drew MacCallum, Canon’s Senior Technical Specialist, in an exclusive interview with PetaPixel. “Our hope is photographers understand that the EOS R System does not sit separately from the EF line, but next to it as a companion.

“Adding the EOS R and RP to your existing kit is not as difficult as it may seem. We created unique mount adapters including the Drop-in Filter Adapter for CPL and ND filters that have no negative effect on how the EF lens works, and in the case of the Control Ring adapter, the EF lens gains functionality.

“It was our great pleasure to see a lot of customers who purchased EOS R/RP say they were looking forward to and loved it. Of course, we understand there are a lot of customers who are keenly waiting for higher level EOS R cameras, but the fact those customers showed extremely positive sentiments toward our state-of-art RF lenses as well as the three different mount adapter offerings to allow existing EF lens owners to fully take advantage of them paired with the brand new System encouraged us so much.”

Rather than throw a camera out that was far and away better than their DSLR offerings, Canon instead chose a strategy that none of its competitors did: they focused on the lenses.

“Our goal when we launched EOS R System was not around the camera itself,” MacCallum told us. “It was all about the system, especially RF mount and RF lenses.”

In an industry first for digital photography, Canon went hard out of the gate not on a camera, but on optics. When they launched the EOS R, they came ready with the 24-105mm f/4 as a “crowd-pleaser,” but then crushed it with some seriously amazing optics with the 28-70mm f/2 and the 50mm f/1.2.

These are extremely high-end optics that are top-tier in performance, with a camera body that many would argue as only being “good enough” upon which to mount them.

Some might see this as a problem, and I admit I did as well at the launch of the system. But looking back, I have to tip my hat to Canon for what I now see as clever brilliance. When they release a new, high-end RF camera, the lens library will be very enticing. It will almost feel like the same situation Sony is presently in that took them years to build out. Sure, there won’t be as many RF lenses as there are E-mount, but there will be high-end and highly usable optics for the shooter looking for a serious system.

“It is not a matter of priority,” MacCallum says. “We always try to develop the best products keeping available technologies at the time in mind. Now, you can see a lot of technological advancements in the EOS-1D X Mark III development announcement, and its live view technologies such as autofocus and silent continuous shooting can be utilized for future EOS R cameras as well. Make no doubt, a higher level of EOS R is not far away.

“EOS R system was designed for the next 30 years, and we do think ‘lens first.’ For its launch, we focused on amazing lenses we could not achieve with the EF mount system, which showcase examples this new system can offer. It may appear we only focused on the high end for the initial launch of lenses, and some of that may be true, but it’s a ‘chicken or the egg’ scenario.

Only two of the lenses released are not L glass, further illustrating Canon’s commitment to high-quality optics above all else.

A year ago, I was prepared to say that Canon was no longer doing the “wait and see” approach to its imaging division. They had spent the last few years doing just that, and the EOS R was what I thought the beginning of a bold, “take action” strategy. Instead, though, I think what we ended up with was a bit of a mix of those two situations.

In a sense, Canon is taking action. They now have 10 lenses for the RF mount, not to mention two different adapters that both have some great design elements. Sure, their camera releases have been sparse and unexciting, but in addition to that lens development, they’ve done just enough to keep the modern audience satisfied for the time being.

But in another sense, Canon really has still been biding their time and waiting. Watching. They likely feel that they have a strong sense of what their competition is capable of building, and where they can compete. Perhaps they feel as I do that Sony is reaching the edge of what is possible. Perhaps they wanted to see what fruits Nikon’s Z series cameras would do for their bottom line, and feel rewarded that they, once Canon’s biggest competitor, have only continued to struggle.

So here, one year later, where does Canon stand? At a glance, they seem not much further ahead than the year before the EOS R, but that would not be seeing the whole picture (ha, a pun). Canon is moving slowly in the camera division, but remarkably quickly with its lenses. Ten L glass lenses in one year is a remarkable achievement.

This evaluation of Canon here at the end of 2019 wasn’t called “EOS R, one year later” for a reason: this is all about RF, and as far as RF is concerned, Canon is doing a heck of a lot to build out the system. And this system isn’t just going to be great lenses forever.

It is unlikely that 2020 will be as camera-body uneventful as 2019 for Canon.

“We are working on cutting technologies such as 8K video, in-body Image Stabilization working in conjunction with Optical IS together, and so on for future EOS R models,” MacCallum told us, echoing rumors and coy statements that Canon has put out over the past couple months. “We promise you will see a lot of exciting products and technologies. Stay tuned!”

Weaknesses: Two camera bodies released, both underpowered when compared against the market.