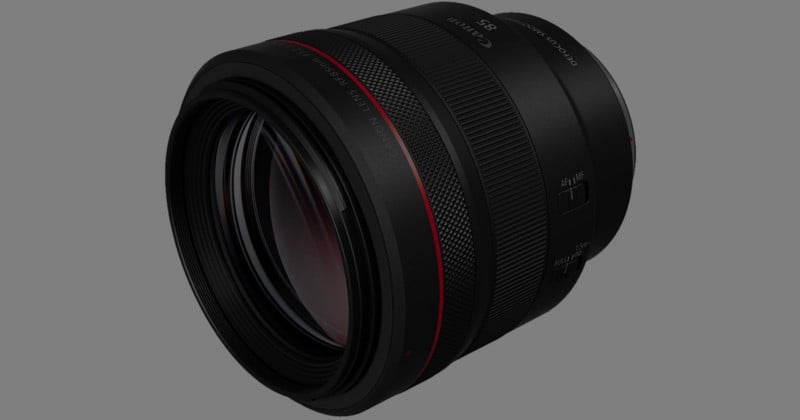 Does that photo of the new Canon 85mm f/1.2L DS IS lens look a bit dark to you? Well, that’s because the new Defocus Smoothing coating Canon applied to its latest prime lens isn’t without its tradeoffs. Though the Defocus Smoothing that helps improve the look of bokeh in photos, it’s going to cost you a stop and a half of light wide open.

Canon confirmed with PetaPixel that the lens does actually cost you a stop and a half of light at f/1.2, instead acting like a T2.5 lens when wide open. If you’re wondering how a lens can be f/1.2 but not actually be f/1.2 in terms of the light it lets in, there is a reason for that.

“The f-stop is a physical measurement of the aperture. It’s not just a light transmittance measurement — that’s a T-stop,” Drew MacCallum, the Senior Technical Specialist at Canon, tells us. “The transmission is one and a third stops darker than f/1.2, but that does change as you stop down the lens.”

Defocus Smoothing becomes minimized as you stop down the lens. Canon has stated both a 1.3 stop loss in light in a recent video (below) and that was echoed by MacCallum in the statement to PetaPixel, but we’ve also seen 1.5 stops referenced in other Canon materials, such as this blog post. For all intents and purposes, you should expect somewhere between 1.3 and 1.5 stops of light lost when shooting wide open with this lens.

Looking at a blog post on Canon USA, Rudy Winston echoes this sentiment: “The Defocus Smoothing coatings in the 85mm f/1.2 L DS lens will reduce actual light transmission by up to 1.5 stops, when the lens is at its widest aperture.”

He then explains how the light loss is less of a big deal for those used to shooting at f/2.8:

“Consider the potential 1.5-stop light loss with the DS version, at f/1.2, as well. If you have been comfortable in available-light situations working at apertures like f/2.8 or f/2, the light loss you experience with the RF 85mm f/1.2 L USM DS will result in similar exposures, when you work with the lens wide-open.”

“If you want that f/1.2 aperture, you have to adjust your light output or ISO sensitivity, however you want to achieve that f/1.2 because it is still an f/1.2 in the lens,” MacCallum says.

This situation explains why Canon has two 85mm f/1.2 lenses available for the RF mount, and this DS lens is very clearly a specialized lens due to this drawback. If you plan to shoot with the new 85mm f/1.2L DS IS lens in the studio and use an external light meter, bear in mind that the values your external light meter tells you to dial in won’t be accurate for this lens wide open. Rudy explains in the video above that closed down further than f/3.2, there is effectively no further light loss.

This is a situation that is unique in the photo world, and likely to cause confusion for those who don’t know what they’re getting into with their new optic. For anyone interested in this lens, it might be a situation where you may want to rent and try it out first before diving into the deep end and purchasing one outright.