It’s not the kind of astrophotography most of us are going to be doing, but NASA just used infrared imaging to make a major discovery: the space agency has detected traces of water in a crater on the sunlit surface of the Moon.

The groundbreaking discovery was made by NASA’s Stratospheric Observatory for Infrared Astronomy (AKA: SOFIA), a modified Boeing 747SP equipped with a 106-inch diameter telescope. By flying altitudes of up to 45,000 feet, SOFIA is able to bypass 99% of the water vapor in Earth’s atmosphere and get a clearer view of the heavens in infrared. That’s how it was able to succeed where previous observations had failed.

Previous attempts to detect water on the sunny side of the Moon were made by everything from spacecraft like Cassini to ground-based telescopes like NASA’s Infrared Telescope Facility, but these images were never able to confirm if the “hydration” they were seeing was H2O (safe, drinkable water) or its relative OH (hydroxyl… definitely not drinkable).

“Prior to the SOFIA observations, we knew there was some kind of hydration,” said Casey Honniball, the lead author who published the results from her graduate thesis work at the University of Hawaii at Mānoa in Honolulu. “But we didn’t know how much, if any, was actually water molecules – like we drink every day – or something more like drain cleaner.”

It was SOFIA’s infrared images that finally confirmed a concentration of ~100 to 412 parts-per-million of water molecules trapped in about a cubic meter of soil in the Moon’s Clavius Crater, using its Faint Object infraRed CAmera for the SOFIA Telescope (AKA: FORCAST) to make the discovery. 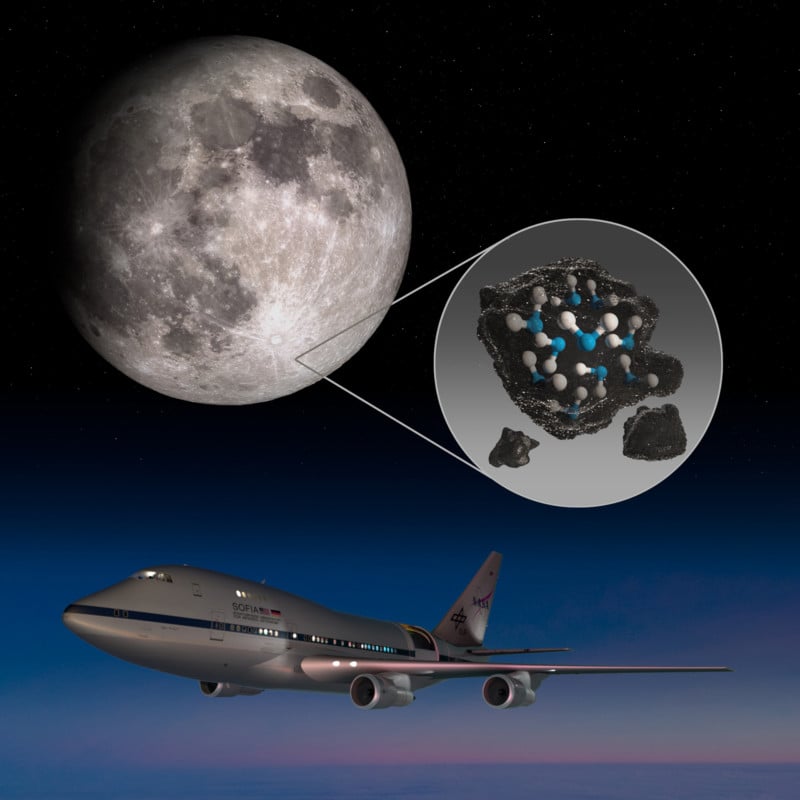 The results have been published by Honniball in a detailed research paper in the latest issue of Nature Astronomy, and their importance is difficult to overstate.

“Without a thick atmosphere, water on the sunlit lunar surface should just be lost to space,” explains Honniball, now a postdoctoral fellow at NASA’s Goddard Space Flight Center in Maryland. “Yet somehow we’re seeing it. Something is generating the water, and something must be trapping it there.”

Several theories are put forward about how this water is produced and accumulated on the sunny side of the Moon, but further research is warranted before any conclusions can be drawn. In the meantime, the discovery opens up a promising vein of research for the Artemis program, which seeks to establish a “sustainable human presence” on the Moon by the end of the decade.

“Water is a valuable resource, for both scientific purposes and for use by our explorers,” said Jacob Bleacher, chief exploration scientist for NASA’s Human Exploration and Operations Mission Directorate. “If we can use the resources at the Moon, then we can carry less water and more equipment to help enable new scientific discoveries.”

In other words: stay tuned, because this isn’t the last we’ve heard of SOFIA and the presence of water on the sunlit side of the Moon.