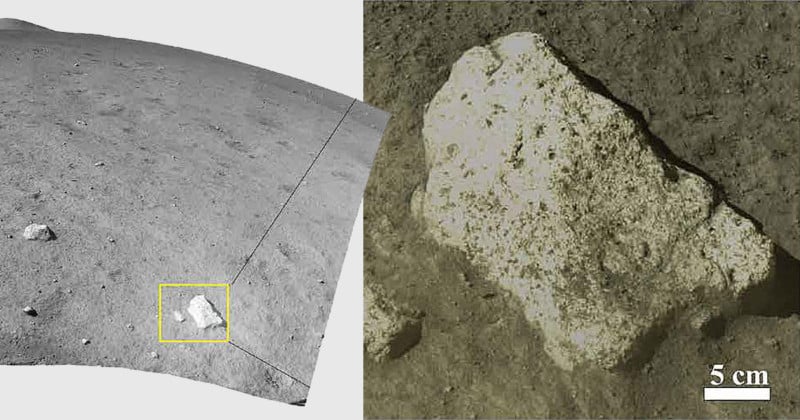 China’s Chang’e 5 lunar lander has found the first-ever on-site evidence of water on the Moon’s surface. Photos shot by the probe show the Moon rock and surrounding lunar soil that the water was detected in.


The discovery was published on January 7th in a research article titled “In situ detection of water on the Moon by the Chang’e 5 lander” by Chinese scientists in the peer-reviewed journal Science Advances.

How Water on the Moon Was Detected Up-Close

A joint research team led by scientists from the Institute of Geology and Geophysics of the Chinese Academy of Sciences (IGGCAS) analyzed photos and reflectance spectral data captured by the Chang’e 5 lander using its onboard lunar mineralogical spectrometer (LMS) at its landing site. The instrument uses visible and infrared light to analyze the mineralogical composition of a small area on the Moon’s surface.

Water content can be estimated based on the way water molecules absorb light. One of the challenges of detecting water based on infrared light, however, is the fact that the heat from the moon’s surface alters the readings. The researchers in the study were able to compensate for this using a thermal correction model.

Scientists believe the soil may have had water implanted from solar wind, while the rock’s higher water content is likely from an unknown source below the Moon’s surface — the rock may have been ejected from deeper within the moon during a previous volcanic eruption.

After analyzing the soil and rock, the Chang’e 5 lander collected the samples (which weighed 1.73kg/3.82lbs) to return them to scientists on Earth.

“The returned samples are a mixture of granules both on the surface and beneath,” IGGCAS researcher Lin Honglei tells Xinhua, explaining the importance of on-site detections. “But an in-situ probe can measure the outermost layer of the lunar surface.”

Another First in Detecting Water on the Moon

There have been prior discoveries of evidence for the presence of water on the Moon, but they have all been based on lunar samples returned to Earth or from data gathered by instruments from afar.

In 2008, a study of lunar rock samples gathered during the Apollo missions in the 1960s and 1970s revealed evidence of water molecules trapped inside glassy, volcanic pebbles.

In 2018, scientists used data from NASA’s Moon Mineralogy Mapper on India’s Chandrayaan-1 lunar probe to prove that there exists water ice on the surface of the Moon.

“In the darkest and coldest parts of its polar regions, a team of scientists has directly observed definitive evidence of water ice on the Moon’s surface,” NASA announced. “These ice deposits are patchily distributed and could possibly be ancient. At the southern pole, most of the ice is concentrated at lunar craters, while the northern pole’s ice is more widely, but sparsely spread.”

In 2020, NASA’s Stratospheric Observatory for Infrared Astronomy (SOFIA) flew a modified Boeing 747 equipped with a powerful telescope and confirmed for the first time that there is water on the sunlit surface of the Moon.

“This discovery indicates that water may be distributed across the lunar surface, and not limited to cold, shadowed places,” NASA announced. “SOFIA has detected water molecules (H2O) in Clavius Crater, one of the largest craters visible from Earth, located in the Moon’s southern hemisphere. Data from this location reveal water in concentrations of 100 to 412 parts per million – roughly equivalent to a 12-ounce bottle of water – trapped in a cubic meter of soil spread across the lunar surface.”

“We had indications that H2O – the familiar water we know – might be present on the sunlit side of the Moon,” said NASA Astrophysics Division Director Paul Hertz. “Now we know it is there.”

This latest confirmation of water on the surface of the Moon by the Chang’e 5 lander was done not from lunar orbit or from Earth but on-site, accomplishing a historic first.

“Many orbital observations and sample measurements completed over the past decade have presented evidence for the presence of water (as hydroxyl and/or H2O) on the Moon,” writes the Chinese Academy of Sciences in a news release. “However, no in-situ measurements have ever been conducted on the lunar surface.”

Image credits: Chang’e 5 moon photo illustrations by the authors of the research paper and licensed under CC BY-NC