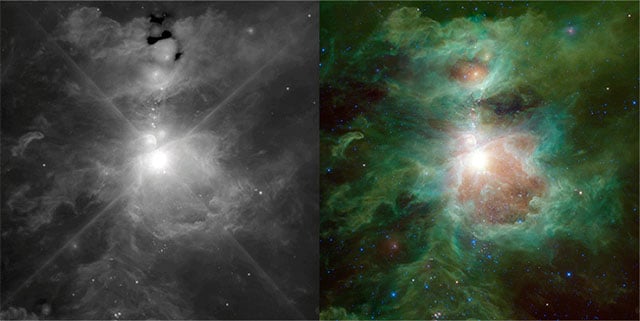 We’ve shared a number of times in the past about how NASA uses Adobe Photoshop to create many of the dazzling space photos released to the public. Earlier this week, Adobe also published an interesting article that reveals 4 different ways the space agency uses image editing software to “reveal the unseeable.”


Here’s a quick rundown of 5 of the ways:

Back in January, NASA released a 1.5-gigapixel photo of the Andromeda galaxy (shown above). That single image was created by stitching together 7,398 separate photos captured by the Hubble space telescope.

NASA’s rovers on Mars are often too focused on the Martian landscape and geology to worry too much about the horizon line. Thus, many of the composite photos end up with jagged and washed out skies. NASA image specialists use programs such as Photoshop to both crop and fill in these areas, creating smooth skies that are nicer for the public to look at.

Many of NASA’s infrared images are processed by visualization scientist Robert Hurt of Caltech, who uses Photoshop to translate photos captured with infrared cameras into images that make sense to us.

“I basically take raw grayscale data from different parts of the infrared spectrum, and then remap them into visible colors—typically with red, green, and blue Photoshop layers—to create images that are accurately representative of the infrared colors that human eyes cannot see,” Hurt tells Adobe. “I think of it as a visual translation process.”

#4: Blending the Visible and Invisible

Hurt also creates a kind of astrophotography HDR, combining photos taken with visible light with the invisible to show a more complete picture of what the telescope cameras can see.

#5. Cleaning Up Photos to Remove Artifacts

Just like with photos taken here on Earth, there are sometimes things in images that can be taken out to clean them up.

“The optics of the camera can create artifacts that to a naive viewer might look like something real from the universe,” Hurt tells Adobe. “But these are things we want to clean out of the image, because we don’t want people to think there’s some weird planet thing floating out there when there isn’t.”

“I always save my layers, generating massive multi-gigabyte files, because I want to be able to backtrack in case I accidentally delete something real. Telling the difference between a digital blemish and an astrophysical object is where being an astronomer comes in.”