It has been a while since we talked about Sony A-mount. The A99 II felt like the last hurrah for the format when it was announced, and seeing continued support in any way probably wasn’t necessary from Sony, who has clearly moved on to the E-mount. The LA-EA 5 adapter, though, shows that despite not needing to, they still care about A-mount users.

The LA-EA 5 is the third E-mount to A-mount adapter that Sony has produced. The first, the LA-EA 3, was simple and compact, but couldn’t support lenses that did not have a motor in them (older lenses that needed a screw to drive the focus). The ensuing adapter, the LA-EA 4, did support those older lenses but had pretty poor autofocus performance overall and was much larger and very bulky. This new LA-EA 5 adapter combines the benefits of both those previous adapters, allowing it to drive those older lenses like the LA-EA 4 but maintaining the small form factor of the LA-EA 3.

Even better, the adapter is compatible with Sony’s latest tracking technology. That said, as shown in the video review above, it is by no means up to the more demanding photo situations where modern mirrorless lenses thrive. In testing, Chris Niccolls found a lens using the adapter to be usable with a subject moving slowly from side to side, but considerably worse at tracking a subject moving quickly towards the camera than a native E-mount lens.

“The autofocus couldn’t keep up or it would just go way out,” Niccolls reported.

Additionally, full support for those older lenses is limited to the a7R IV and the a6600 at this time. While support for other cameras could come down the road, no timeline is currently available. 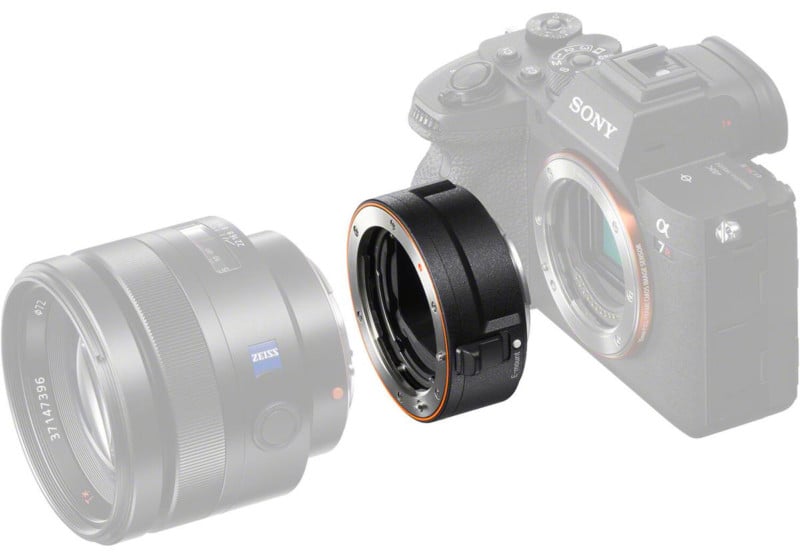 Still, releasing this product at all in 2020 is basically a gesture of goodwill from Sony. There was really no pressure for them to produce the product and it only directly benefits a small number of photographers who are still clinging to A-mount glass. While it does open the door for E-mount shooters to pick up classic – and optically excellent – A-mount glass on the used market for what is likely to be a great deal, such exchanges do not benefit Sony.

“This is not about old glass versus new glass,” Niccolls said. “That’s not the point. That’s not even the issue… this is an amazing gesture.”

In one of the few examples of such in modern consumerism, Sony appears to have done this not because they had to, but because they wanted to despite the likely low return on investment. Releasing the LA-EA 5 is a continued show of support for even the smallest number of photographers who adopted the company’s endeavor into digital cameras many years ago. It sends the message that investing in Sony products will bear fruit long into the future, even well after most companies would have abandoned early adopters.