So I just dropped $450 on Peter McKinnon’s variable ND Filters from Polar Pro. I needed some quick for a job. They were trusted. I love a couple of features. They have stop markings and hard stops and they seem pretty robust. So I dropped all that money on them because I needed a good set. And I want to see if it was worth it compared to some of the cheaper options.

I was on a shoot one day and I needed a variable ND Filters for three cameras. So I bought the Tiffin $175 inexpensive variable ND filters. Let’s compare these. We’re also going to look at the Syrp ND filters and the B&W ND Filters. What do we need to look for? What’s the concern?

Let me just say this, I don’t love variable ND Filters. One of the biggest reasons for that is color shift. Most of them have some sort of shift that’s not good at all. And then you’re also dealing with stuff like vignetting and cross-hatching because the variable ND is just two polarizers that are stuck back to back. So it can do some weird stuff to the light that’s entering the lens. And sometimes it’ll kill the contrast. It’s really interesting how it will affect the contrast. So it’s really important to look at those three things and to see what’s a good variable ND that is going to work for you. I think you’re going to be very shocked at just how little you have to pay. Let’s check it out.

We want you to see the different filters and exactly how they respond to color contrast and cross-hatching and things like that. We’re going to go quickly through these. Most of the filters were within 400 degrees Kelvin off. I think our B&W filters are like 150 degrees off. We white-balanced all these using an eyedropper in Photoshop back to a clean color and then we saw how much they had changed from the original. How much the color setting had changed. 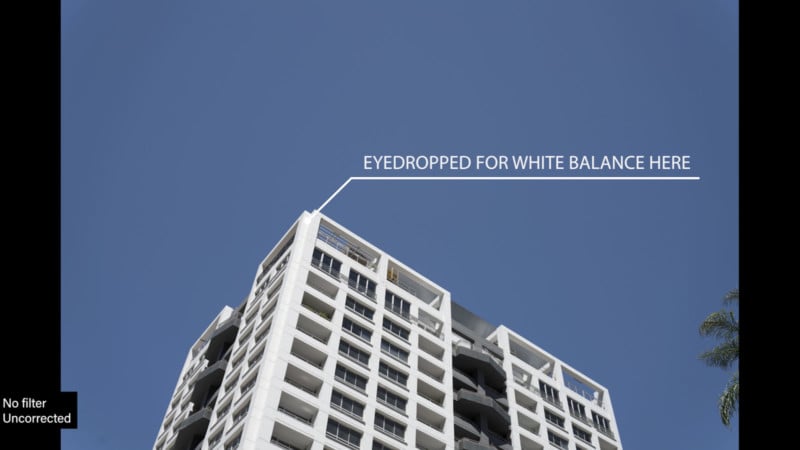 Here we have the no filter image first. There is a tiny bit of vignetting in the corners. We eye dropped close here to the corner of the building. It’s like 5100 degrees Kelvin plus 11 on the camera. 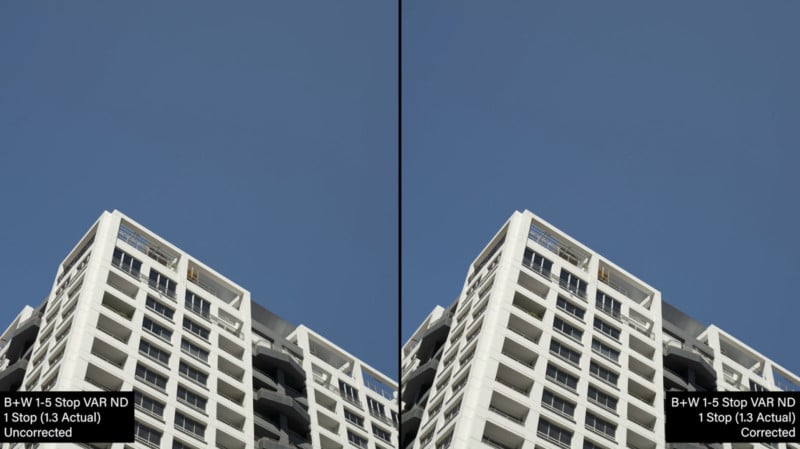 Now we’re going to pull up our first filter here. It is the B&W 1-5 stop variable ND. The image on the left is uncorrected with the filter and then the image on the right we’ve eye dropped that same spot again to adjust it. This is 1.3 stops, which is the minimum on the B&W filter. So it’s pretty accurate. It corrected back really nicely. It’s a beautiful clean image. The blue is wonderful. It didn’t lose the contrast too much. So it actually looks great. But how does it look now if we go to three stops? 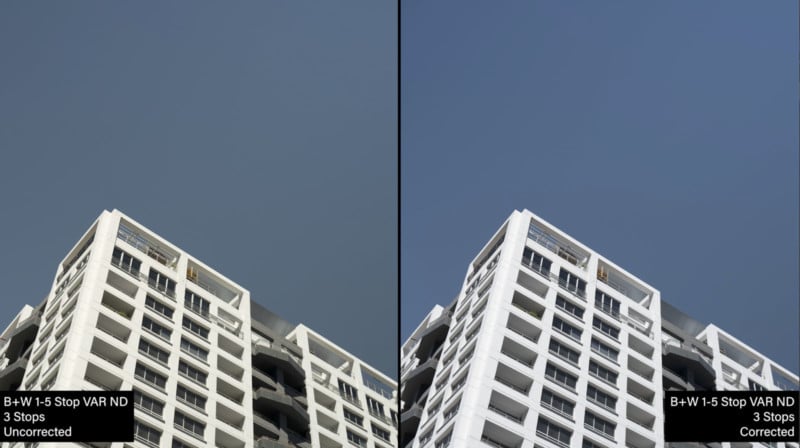 At three stops in the uncorrected image, you see the color start to wash out a little and there’s some weird shading going on. You’re starting to see that cross-hatching develop. But once you correct it, it actually doesn’t look bad. It’s a little shadowy and a little bit desaturated. It’s not amazing. It’s okay. 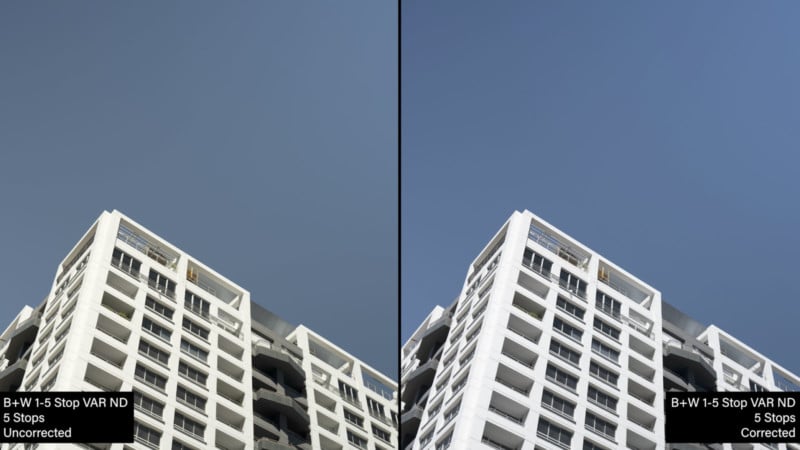 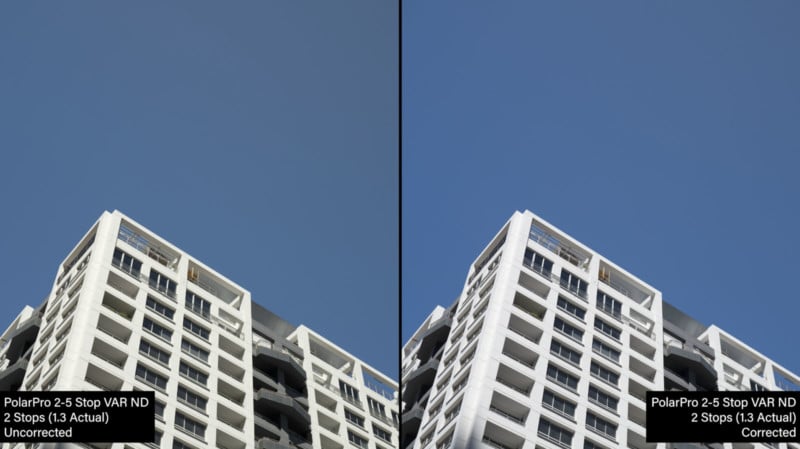 So let’s go to the Polar Pro. This is the one I’m already really invested in. So I was hoping that it would do great. We will let you be the judge. The minimum is 1.3 stops. It looks great corrected. It actually looks almost identical to the original. It shifted 300 degrees Kelvin and plus 10 magenta. But it easily corrected and looks good. 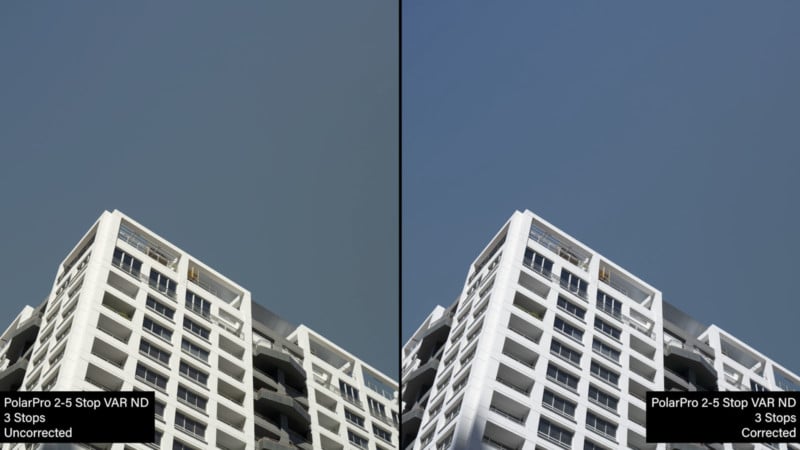 But then after that it turns kind of ugly. It gets muddy looking in the middle, and this is at three stops here. 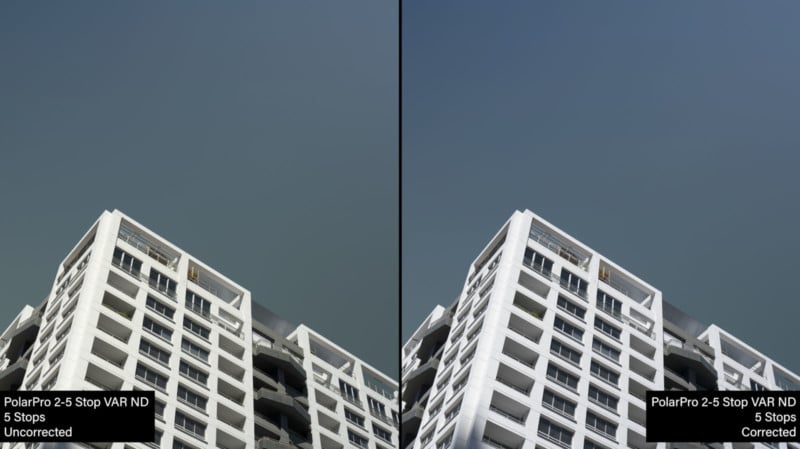 At five stops it seems like the colors just got desaturated. So even though we correct it with the white balance, but the color is gone. It was that really. So the Polar Pro at 5 stops shifted minus 300 K plus 9 magenta. But that’s not the issue. The issue is that it just became very desaturated and muddy looking. 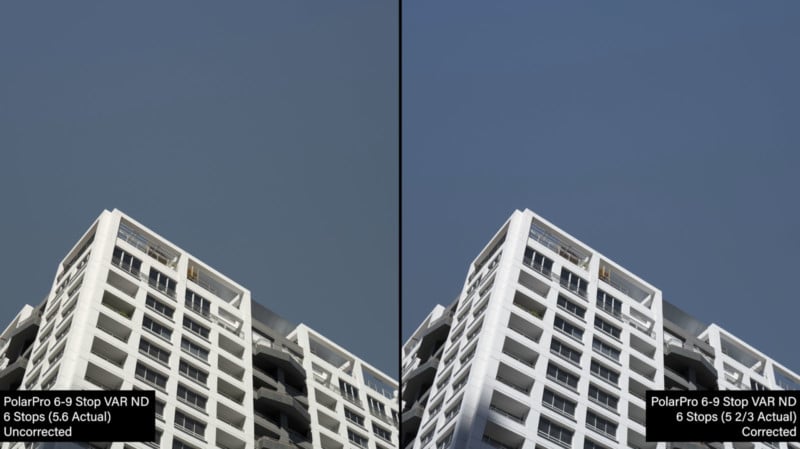 The 6 stop mark on this filter is actually delivering 5.6 stops of filtration and then the nine stop mark is delivering 7.3 stops with filtration. So it doesn’t actually filter out as much light as it advertises, which is kind of a disappointment. The color shifting at the minimum setting is still kind of bad. The 6 stop mark is not as bad as the last one was. It’s minus 400 degrees K, 6 magenta. It’s a little desaturated. It’s not quite as bad but feels kind of muddy again to me. 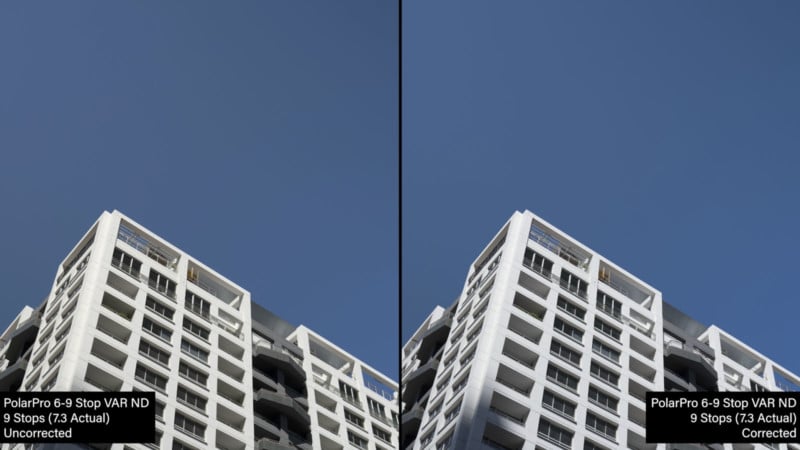 But then at the 9-stop mark or 7.3 stops it clears up. And actually, it looks pretty good. So if you’re using this combo of lenses, it works really well at the minimum, like the one-stop and the seven-stop end. 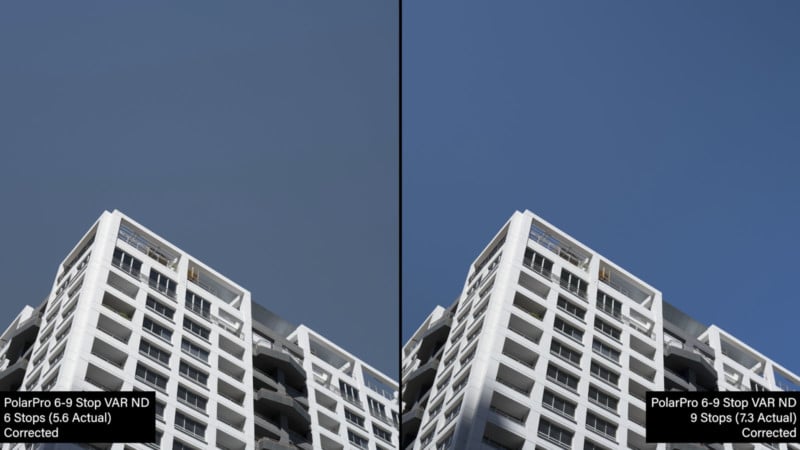 But in between really messes around with the color. The disappointment here for me is it’s not filtering nine stops of light. 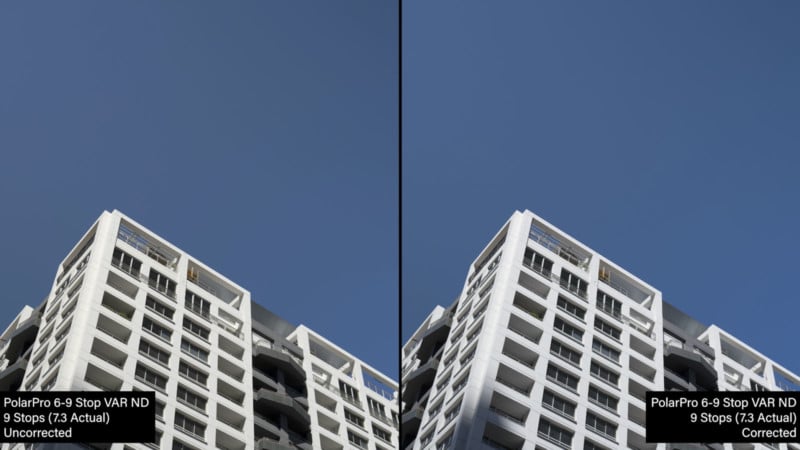 Okay, so the Syrp 1-9 filter. This is the original image. This has way more vignetting. It kind of collapses on the side and gets dark on the sides. The color is actually pretty consistent. We lose about 450 K plus 2 magenta. Not much magenta shift but about 450 K. On its max it is 150 K. 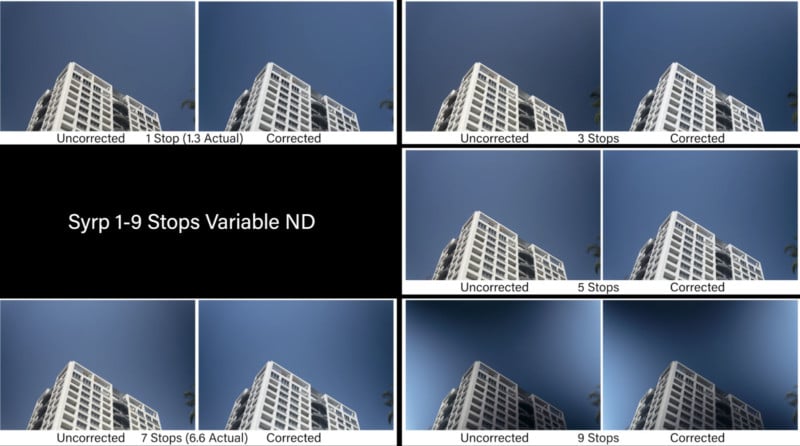 It doesn’t desaturate. It just gets these dark areas on the right and left. You can see where the cross-hatching is starting. Maybe with some subject matters this wouldn’t show but if you have any kind of a high key area in your image like the blue sky like we have here, it is super noticeable, especially for video. If you are moving around, it’s going to be really noticeable. So that Syrp 1-9 is really more like a 1-6. With vignetting all the way through. 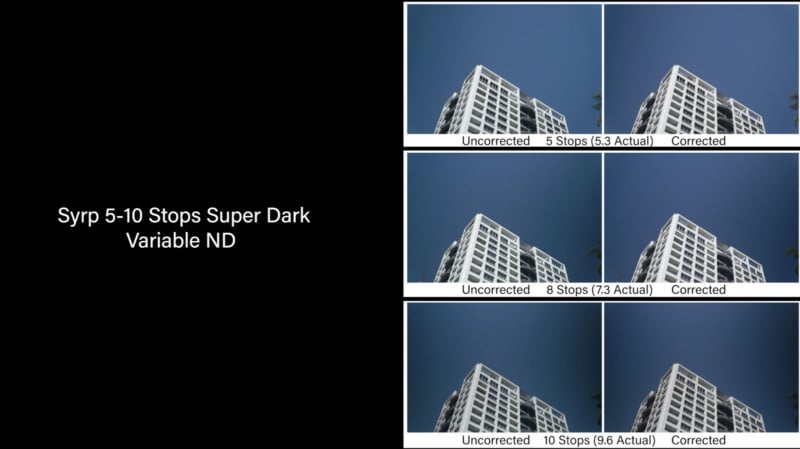 Let’s look at the newer Syrp 5-10. They call this the super dark filter. The range is about 5.3 to 9.6. Again, the color looks pretty good, but the vignetting is super heavy. It’s okay at the 5 stop end but it gets really bad at the 9. It looks almost as if you’ve isolated or masked out the building and you made the entire sky black. It is shifting from 300 K to 250 K plus 10 magenta. But the cross-hatching is a problem. I will say the color is pretty good all the way through. It doesn’t give you that muddy look like we got with the Polar Pro. 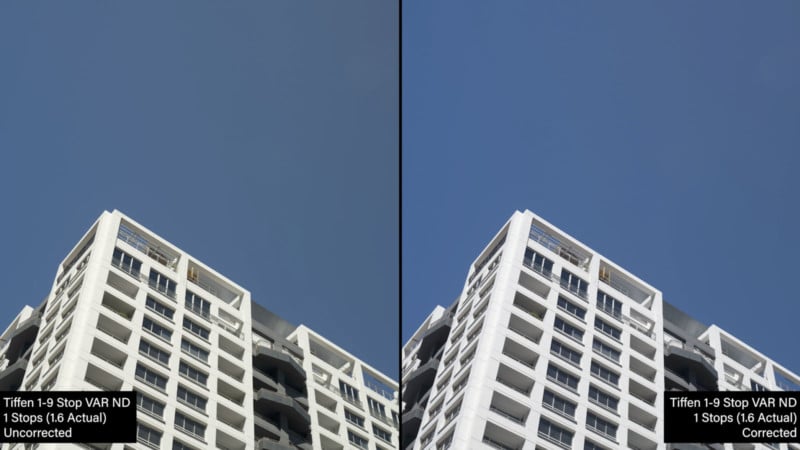 All right, here’s the Tiffin 1-9. It actually is not bad for being the cheapest option. I think at the 1 stop it’s really about 1.6 stops. At that end, it looks super clean with hardly any effect to the image. 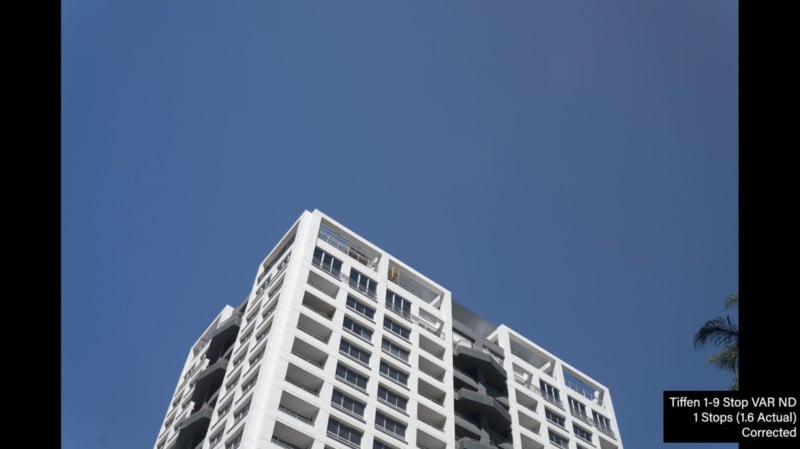 Then we go to 3 stops and it is pretty good, still really clean. 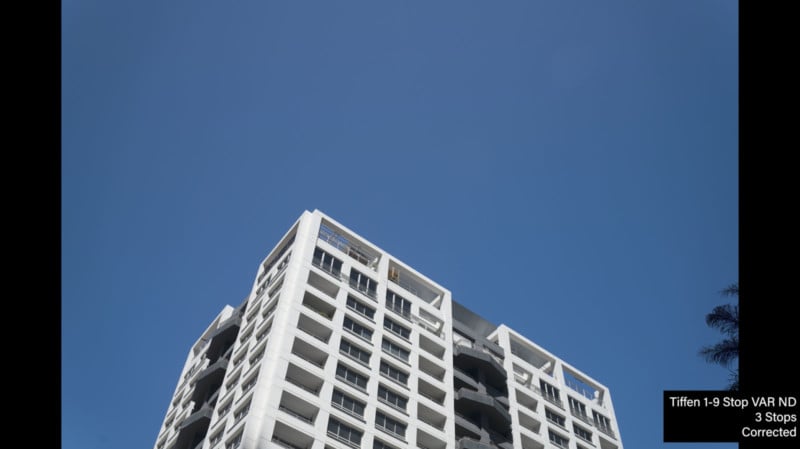 We shot this to 7.3. I think this is probably as far as I felt comfortable pushing it. I felt like this is the max. It doesn’t go to nine because nine doesn’t work. 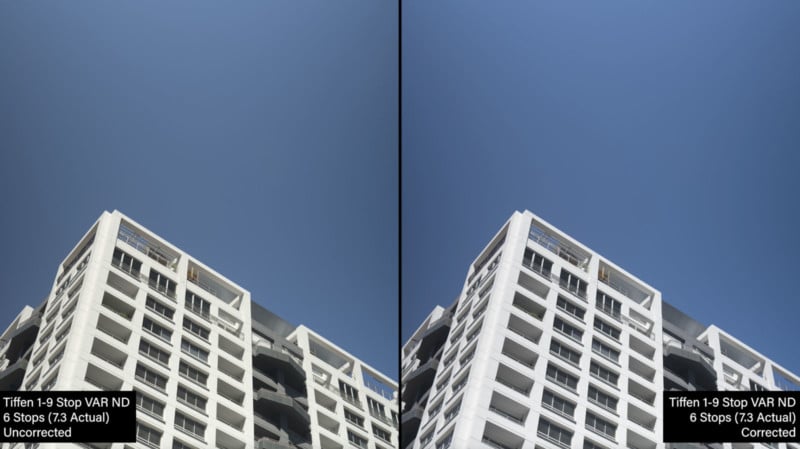 I would back off of this. I would probably just keep it at 6 stops. 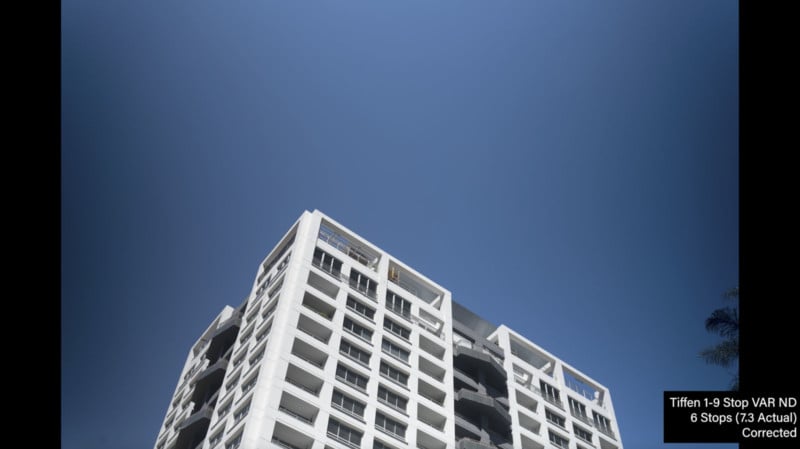 It has the cleanest color this shift. It shifted minus 350 or 250 K. So it didn’t shift that much. But you just start getting that vignetting so early. 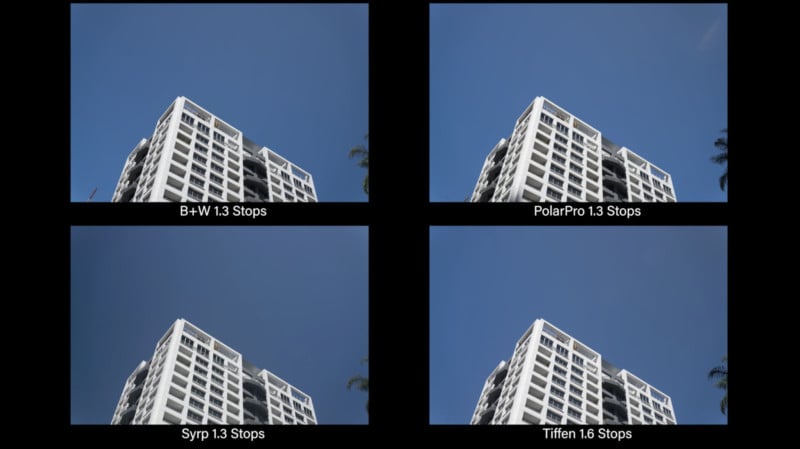 Let’s look at all these filters at their minimum setting at 1-2 stops. At this end, they all do pretty well, except the Syrp is already vignetting. But it’s hard to say a clear winner here. And now we have them all at three stops. The Syrp has the vignetting and the Polar Pro and the B&W are both a little desaturated. I’d pick the Tiffin at this point. 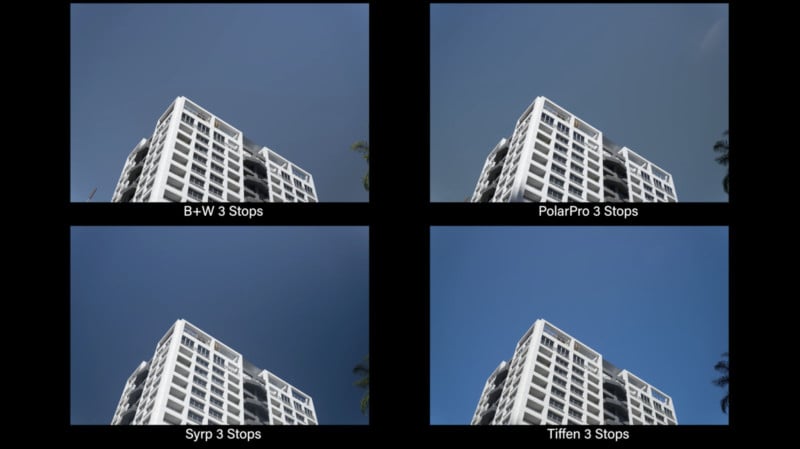 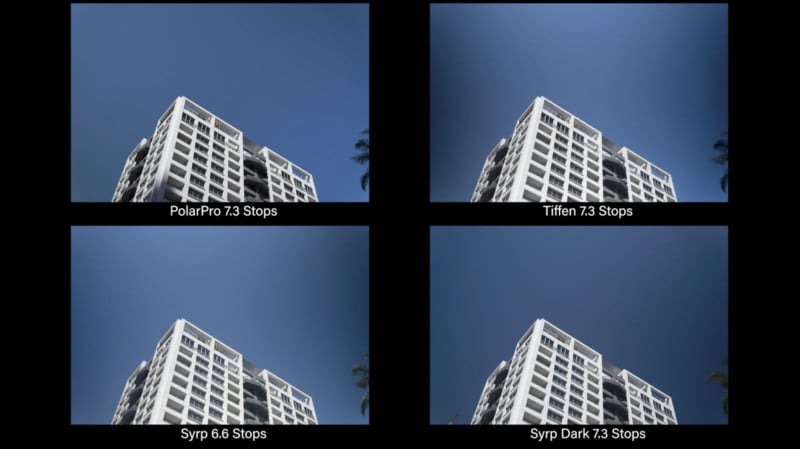 So here’s 6 or 7 stops on all the filters that can go that far. Polar Pro looks pretty good at the dark end. This is 7.3 stops Polar Pro’s colors cleaned up and doesn’t have that muddy look. I’d actually say it’s the best of the bunch at 7 stop end. The Syrp is still vignetting. The Syrp 5-10 vignetting is even worse, which is surprising because you think the super dark filter would be the one that was better at being super dark. The Tiffin does again have vignetting. It’s really more of a 1-5 filter but I thought I’d pull it up again just to see how it compares.

We tested a B&W straight filter and not a variable ND. This is a 3 stop and a 6 stop. So you can stack these to give yourself a 9 stop ND filter. It is startling how much cleaner these are color-wise and you don’t get any of the vignetting. The difference between the corrected and uncorrected images is almost negligible. It’s clean all the way across. 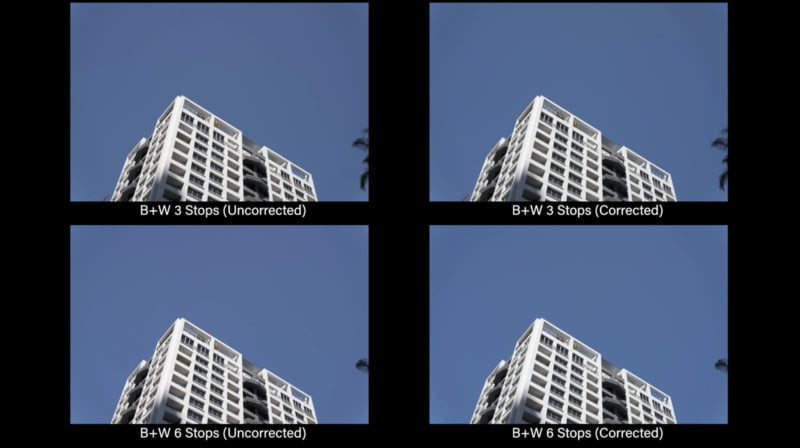 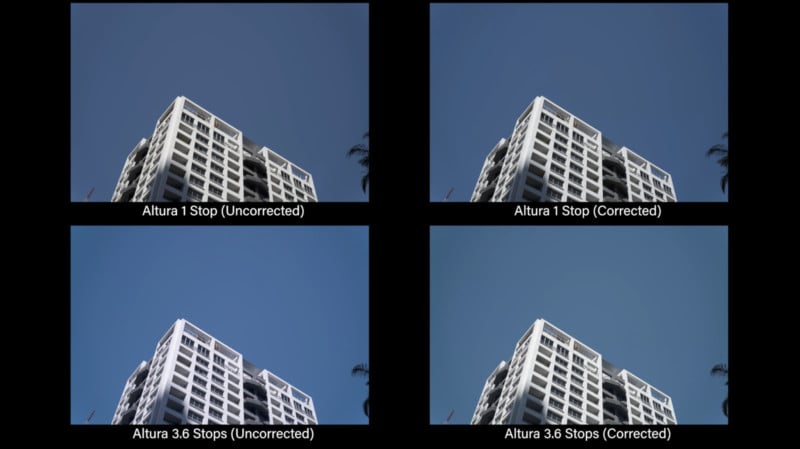 We threw in these Amazon filters. I had some filters that my son-in-law wanted. I told my wife they were terrible filters. I think they were around $50 for the set of 3. I’d be shocked if they were any good at all. They are not as good as the B&W. You get a little more of this shading going on and the color was a little less accurate, but it still beats out the variable ND filters.

So here’s my takeaway on this, if you’re a still photographer, and you need ND filters to be able to give yourself blurring water in the daytime or doing time-lapse where you want to have the people moving using a long shutter, buy a straight-up 3 stop and 6 stop set like the B&W. I think that B&W 3 and 6 will give you up to nine stops of ND. It’s going to give you really clean color all the way through but allow you to get that blurry water.

Now if you’re a video shooter and screwing and unscrewing filters isn’t practical in the run and gun situation, you want the variable ND because it’s fast. You have a range from 1-5 stops with just a twist of a thing, it doesn’t have to come off the camera. I think if I had to make a choice, it’d be really tough. 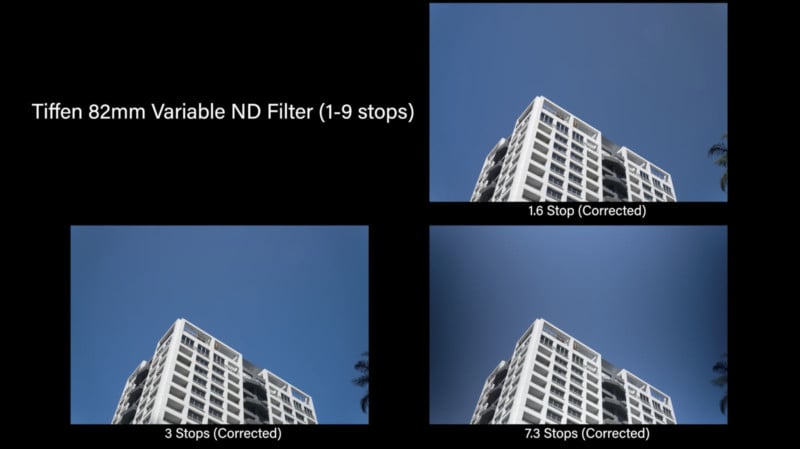 I’m leaning towards the Tiffin just because it was so consistent, but it only gives you up to 5, maybe 6 stops of filtration and often that’s not enough. If I want to shoot at a 2.8 outside in the daylight you really need 8 stops or 10 stops of ND. 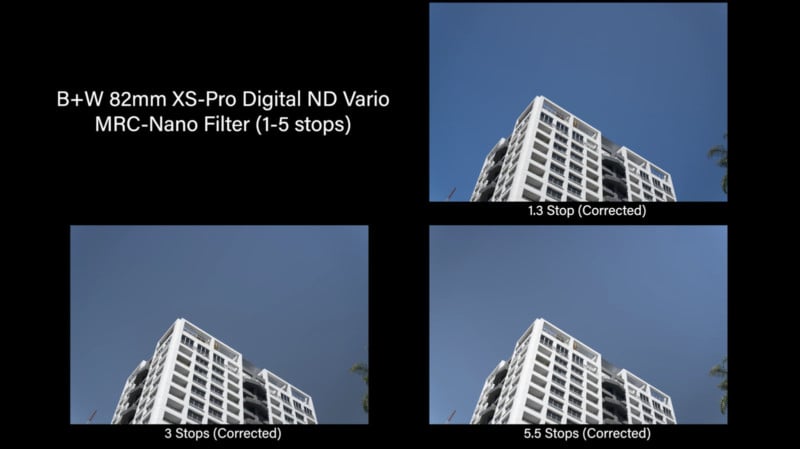 I think if I had to choose a runner up, I might go with a B&W quality glass. It was 1-5 stops. There was a little bit of washed-out color. I think the worst offenders were the Polar Pro because the color just went crazy in the middle. It was good on the ends, but in the middle range it is terrible. 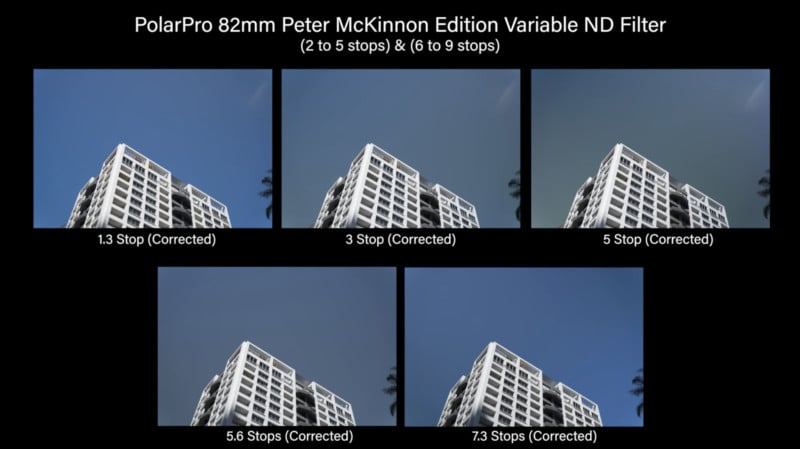 But there was no vignetting so it has that going for it. And the Syrp just had crazy vignetting yet the color was okay. This whole thing was a huge surprise. The cheapest option was maybe the best one which never happens in photography. 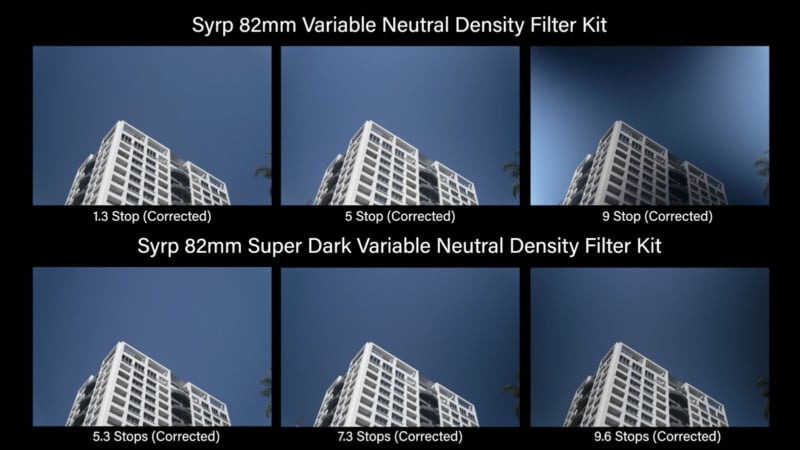 So kudos to Tiffen, who has been making filters for a long time and they have an excellent product.

So there you have it, a look at variable ND filters and a look at some standard ND filters. Hope this helps you make a decision as a photographer or as a videographer on what’s the best one for you to buy and to use on your camera.