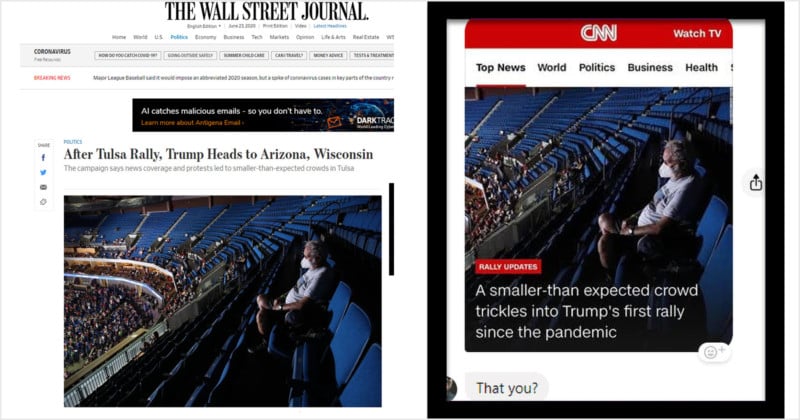 This is a clickbait headline that is totally “true.” Quotation marks intentional. I readily admit to being an old white guy, but I do object to becoming a poster boy for the old lonely white guy Trump supporter without friends.

I should probably explain.

I work as a freelance photographer, and on Saturday, June 20, I crossed the Red River and headed up from my home in North Texas to Tulsa. I was there to catch President Donald Trump’s first campaign rally of the year, an event that had sparked controversy on several levels. I thought it would be an opportunity for some dramatic and politically relevant photographs and pitched the idea to the editors of the Dallas Observer. They agreed, so I packed my cameras and away I went.

I covered the rally and various protests from noon until around 10 p.m., and then started on the three-hour drive home. I got home a little after 1 a.m., took a shower, dumped my clothes in the garage, and went off to self-quarantine by sleeping on the couch. Just before going to sleep, I checked my messages and started seeing things like this: 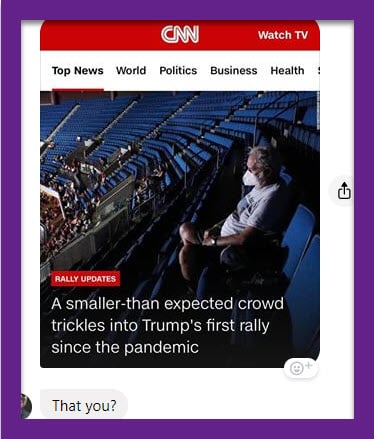 Yes, that’s me in the picture. Since that time I’ve seen the shot appear in a lot of places, from CNN to the Wall Street Journal, The Lincoln Project and papers in London. The shot is for sale over at Getty Images. Just search “Trump supporter sits alone Tulsa.”

I’m not complaining about having my picture taken. As a photographer I do this, too. All the time. The photographer is Win McNamee, a well-respected and established photojournalist, and he was doing what all of us do. Interestingly, there was a similar photo opportunity one section over. Both of us took photos of this gentleman. Looking at his hat, I’m comfortable assuming that he, at least, is a Trump supporter.

I won’t dive too deeply into my own politics, but I will say that on a personal level, I find politicians are better fodder for lampooning than supporting. But when I’m working, as I was on that day, I’m there to report, not support.

Both McNamee’s photo and mine were taken hours before Trump got on stage. As time wore on, it became more and more apparent that the story around huge COVID-rejecting crowds was morphing into a counter narrative of disappointing turnout and empty seats. As part of that narrative, these photos are effective. That’s why I took mine and why McNamee took his.

I had two interactions with Trump’s media personnel during the afternoon (not counting the non-reply to my media request). The first came while I was sitting up in nosebleed, as pictured in McNamee’s photo of me. A young woman with her rally badge asked if I was press. Since I had not been accredited for the event, I indicated that I was not. At this point it became apparent that the Trump team was fully aware that the attendance would not match expectations.

I shoot a lot of concerts, and I know what her question meant. Concert promoters are usually more blunt, flat out telling you not to shoot toward the crowd when all those empty seats are visible in the background. The second encounter was a half hour before Trump came on. I went down to the bottom level and tried to get out on the stadium floor. There was plenty of room. Her response was they were not allowing anyone else on the floor.

My interpretation was the same; they want butts in seats where they could be seen. In the end, photographs will show a reasonably full lower section of the auditorium and an almost equally empty upper bowl. I’m sure that was the story McNamee wanted to convey by including the background in the shot he took of me. I took another approach, which made more use of the empty seats.

The smaller-than-anticipated Trump crowds are a newsworthy story. The campaign had prepped for up to 100,000 people and rather well. Really. But as the day wore on, the outdoor viewing areas were shut down, and regardless of whether you signed up through a Trump-approved website or gaslighted the campaign through TikTok, it didn’t matter. If you wanted to come in, you were able to, as long as your temperature was normal.

When I left for Tulsa, it was without media credentials or a ticket or any expectation that I would get into the arena. When the opportunity opened up, I took it as a way to get closer to the story I was covering. When I got to the BOK center itself, with its padded seats and blasting air conditioning, I took it as a way to chill out, social distance, check my messages and rest up for the post-speech protests. I quite intentionally sought out a space in the upper reaches of the stadium, hoping for some peace and quiet. As it turns out, it was pretty easy to find.

When Trump and Vice President Mike Pence began to speak, I went back down to grab some pictures and exited about 15 minutes into Trump’s delivery. I watched some more on the video board on the way out while eating some excellent street tacos at one of the food trucks.

In the end, I won’t get too upset about the whole thing. I have an insider’s perspective on how this happens. Win McNamee was there to cover the event, the small crowds had become a story, and the picture illustrates that reality pretty well. I’m a little disappointed that he didn’t recognize me as a world famous photographer, but that’s probably just because I’m not a world famous photographer.

About the author: Mike Brooks is a freelance photographer from Dallas TX specializing in live music photography, when there is any. His pictures from the president’s rally and the associated protests can be found here: Trump in Tulsa. You can see more of his work on his website.

Link to the original article as published in the Dallas Observer.

Instagram Will Soon Let ‘Creators’ Sell Products Through the App