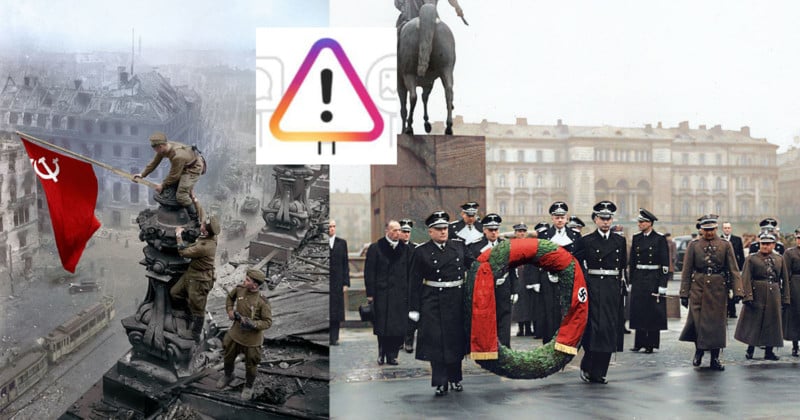 One of the world’s leading colorists of historic photos fears she will be banned permanently from Facebook and Instagram after multiple suspensions of her accounts.

Russian photo colorist Olga Shirnina has stunning new work ready to post for her more than 45,000 followers on social media but is unwilling to share three new images on Facebook and Instagram because, as she told RFE/RL, “I would be [suspended] again for sure.”

Shirnina, who works under the name Klimbim, is a professional German-Russian translator and considered one of the best in the world at using Photoshop to transform historic black-and-white images into color.

The Moscow-based translator and history enthusiast says she spends hours on her computer researching, then adding vibrance to monochrome historic images “purely for pleasure.” Shirnina has been profiled in leading news and art websites around the world and labels her work free for anyone to use not-for-profit. Photos in her colorized collection are a mixture of daily life, portraits, and historic photojournalism from around the world. None of her captions include political commentary.

In September 2019, Shirnina received her first notification from Instagram that an image she colorized of senior Nazi leaders had “violated community guidelines” and that her account could be deleted if she posted similar content in the future.

The situation escalated when Shirnina’s Facebook account was suspended after she posted the image below of two Nazi soldiers during a battle in Ukraine. No Nazi insignia is visible in the photo, suggesting the image may have been flagged by a person rather than through automation. Shirnina was again warned she had broken Facebook rules on dangerous organizations. It would prove the first and last time she says an appeal was successful.

We also remove content that expresses support or praise for groups, leaders, or individuals involved in these activities.

Then in early May, Shirnina’s Facebook account was suspended for three days — this time for posting a colorized version of Evgenei Khaldei’s iconic photo of Soviet soldiers raising their flag above the Reichstag in Berlin in 1945. Her appeal against the decision was rejected and she was able to use her account with more than 20,000 followers only after waiting three days, then sending a scan of her driver’s license, which Facebook requested to confirm her identity.

Shirnina says she has been “puzzled” by the apparent inconsistency of Facebook’s changing rules and says it remains unclear which images could trigger a permanent ban. “I work with real historical photos and they can’t be corrected!”

Several images of Soviet leaders responsible for the deaths of millions of people — as well as photos with Soviet symbols clearly visible — have been published without problem on her pages.

We requested clarification from Facebook’s press department about which historic images represented a violation of their community guidelines on May 28 but did not immediately receive a response.

About the author: Amos Chapple is a New Zealand born, Europe-based photographer and writer whose work has been published in most of the world’s major news titles. You can find more of his work on his website, Facebook, and Instagram. This article was also published at RFE/RL.

My Unusual Journey in Image Creation and Photography

Read This Before You Ask an Event Photographer for Photos