A wedding videography and photography company has sparked fury online for its response to a client who requested a refund after the death of his fiancée.

KRDO reports that the Dallas, Texas-based Copper Stallion Media had been booked to film the wedding of Justin Montney and Alexis Wyatt, who reportedly put down a non-refundable $1,800 upfront for the services.

Tragically, the 22-year-old Wyatt died in a car crash in February. Montney then reached out to Copper Stallion Media for a refund, believing that the company should grant it because the wedding cancellation was out of Montney’s control.

When the company refused, Montney left a negative review for the company on TheKnot with his story and experience. Copper Station Media then allegedly threatened to sue for defamation, leading Montney to turn to the local news outlet KRDO for help in bringing the dispute to the public’s attention.

Copper Station Media’s next move? It set up a website at JustinMontney.com with a lengthy statement that included its email exchange with Montney. The statement has since been taken down, but it can still be read on the Internet Archive’s Wayback Machine.

BuzzFeed News notes that the portrait of Montney at the top of the page appeared to have been taken from Montney’s college athletics team page and then Photoshopped (to look like a mug shot?).

“In the news story he admits that the contract was non-refundable but says we should give the money back due to the circumstance,” the company writes. “Life is a b**ch, Justin.”

The company then explains why it won’t budge on its non-refundable deposit policy:

First, when you reserve the date with us, that date is yours. We block that date off in our calendar so no one else can book that specific date. If something should ever happen and the wedding is canceled, like in this scenario, we keep that money as liquidated damages as there is a likelihood that we will never re-book that date with someone else.

Second, Justin and his fiancée booked two videographers with us. Now, we have two shooters who cannot film that day and lose out on that income.

Nonrefundable deposits are the industry standard.

Copper Station Media says that since the “smear campaign” began, it has been flooded with emails, phone calls, comments, and negative reviews online (including 75 one-star reviews on TheKnot in the span of hours).

The company ends its statement with some more harsh words for Montney:

We understand a death occurred, but it’s not right for people to turn to the internet and sodomize the reputation of a company. This is malice and the intent was to do harm. We know Justin is still young and in his 20s but this was wrong. He could have quietly filed a small claim to ‘try’ to recoup the non-refundable deposit. Instead, he chose the internet to shake us down.

This website is registered with us for the next two years.

Thanks to your non-refundable deposit, you support this website and domain.

Welcome to the interwebs you stupid s**t.

On the day the wedding was originally booked for, Copper Station Media took to its Facebook page to share another harsh word for Montney. 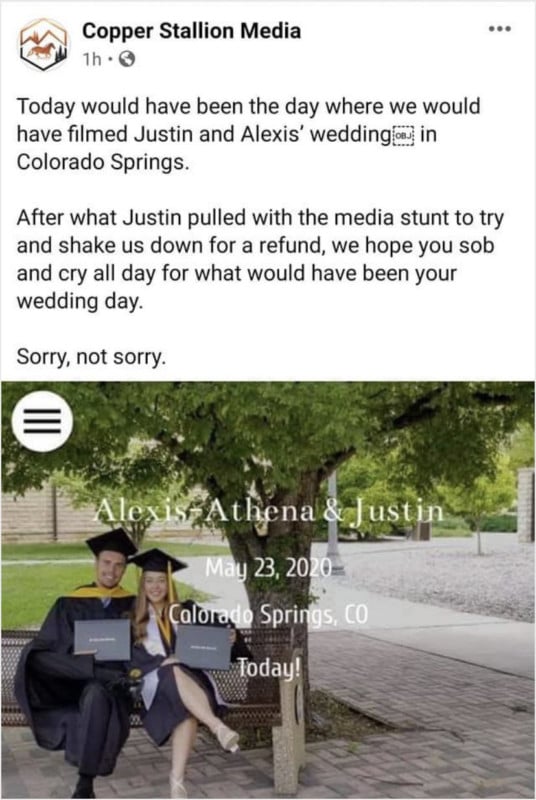 “After what Justin pulled with the media stunt to try and shake us down for a refund, we hope you sob and cry all day for what would have been your wedding day,” the company writes. “Sorry, not sorry.”

The company’s actions have since gone viral, and the response on the Internet has overwhelmingly been a condemnation of how Montney has been treated in this dispute.

there’s really people like this in the world. I hope no one hires them and they lose their business pic.twitter.com/OosZZcYaX6

A GoFundMe has been set up to help Wyatt’s parents pay for her funeral expenses, and the campaign has already more than doubled its initial $7,000 goal at the time of this writing.