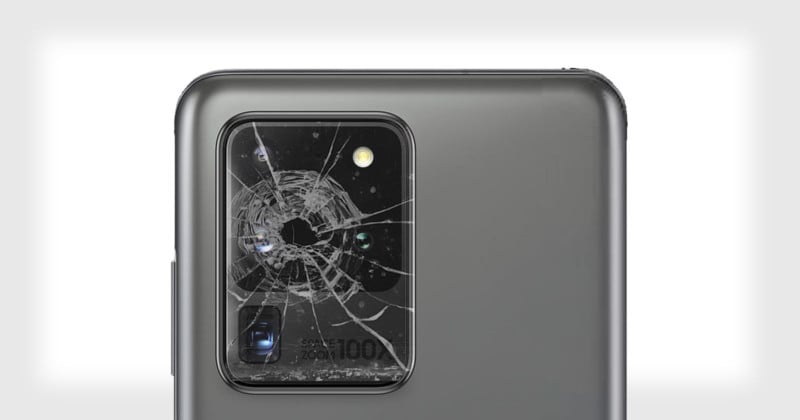 If you’re the proud owner of a Samsung Galaxy S20 Ultra, you may want to start being extra careful with the smartphone — some users are reporting that the glass covering the large 108MP module is unexpectedly shattering on them for no apparent reason.

Several reports have been posted to places like Samsung’s community forums, Reddit, and Twitter by owners who were surprised to discover broken glass on their camera modules, with damage ranging from hairline cracks to things that look almost like bullet holes.

Reports seem to stretch back to early March, shortly after the phone was launched. A common thread between many of the reports seems to be confusion regarding how the damage happened — owners don’t recall ever dropping or bumping their phones (often reportedly in protective cases), they simply noticed the damaged glass one day after pulling the phone from their pockets.

Here are some photos of the damage people are discovering:

@SamsungMobileUS @UnboxTherapy @ZacksJerryRig @verge I'm wondering if @SamsungMobile will have anything to say about the camera glass breaking on the S20ultra while setting on my wireless charger. Tons of ppl on Samsung community saying the same thing #S20Ultra #Samsung pic.twitter.com/y7uSeLC2Vg

Hi @SamsungMobile. Can you please explain why you have not reinforced the glass on the periscope camera on the s20 ultra.
This broke while in my pocket.#GalaxyS20 #Samsung #GalaxyS20Ultra #Quality #lasted3days pic.twitter.com/DBERErTdsl

The glass of my new Samsung S20 ultra broke (makes me wonder the quality) Now guess ? The local repair certify center don’t have the cosmic grey glass. Worst purchase ever! #SamsungGalaxyS20Ultra @SamsungMobile I reached out with no answer. #shameful pic.twitter.com/9ug0hOMFm9

SamMobile reports that Samsung is considering this type of damage to be cosmetic and is thus charging $100 to $400 for repairs (depending on if you have Samsung Premium Care).

“Samsung hasn’t acknowledged this as an issue on the forum,” SamMobile writes. “Many of the users are now throwing around theories of this being a design flaw with some even calling on the company for a recall. It doesn’t appear to be a very widespread issue, though, so there may be another explanation here.”

We’ll update this post if/when Samsung issues an official statement regarding this matter.