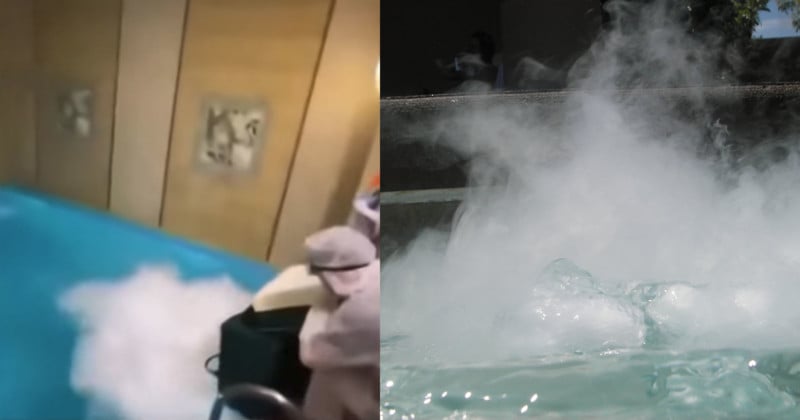 According to the Moscow Times, Instagram influencer Ekaterina Didenko was celebrating her 29th birthday at a pool and sauna complex this past Friday when her husband, 32-year-old Valentin Didenko, dumped 55 pounds of dry ice into the pool to create dramatic “visual effect.”

You can see the moment when the dry ice was unloaded into the pool in the Russian news report below:

Dry ice is frozen carbon dioxide, which sublimates into CO2 gas at room temperature and pressure, a reaction that’s accelerated when the dry ice placed it water. It’s commonly used by photographers and visual effects artists to create “fog” effects, but it can be dangerous to handle without proper safety precautions, and can lead to carbon dioxide poisoning if used too liberally in an enclosed space.

This is what appears to have happened at the bath house on Friday.

According to the original reports out of Russia, and a follow-up by the Daily Mail, people began fainting very soon after the dry ice was dropped into the pool. Two attendees—Natalia Monakova and Yuri Alferov, both 25 years old—were pronounced dead at the scene, while Valentin Didenko and seven others were rushed to a hospital with various levels of poisoning and chemical burns.

32-year-old Didenko died at the hospital, and four party goers are still hospitalized, according to the most recent reports.

Dry ice should always be handled with thermally insulated gloves, or preferably tongs, and it should never be used to create “fog” effects in a poorly ventilated area. Normal, breathable air consists of approximately 78% nitrogen, 21% oxygen and only 0.035% carbon dioxide, but the level of CO2 in the air can become dangerous when it reaches as little as 0.5%.

If you plan to use dry ice for visual effects in your photography, be extremely careful and consult the various safety resources available online.

Image credits: Header photos via Москва 24 and by Dylan Duvergé (licensed under CC BY 2.0)

A ‘Time-Blended’ Star Trail Timelapse of the Night Sky

5 Pieces of Street Photography Advice You Should Ignore