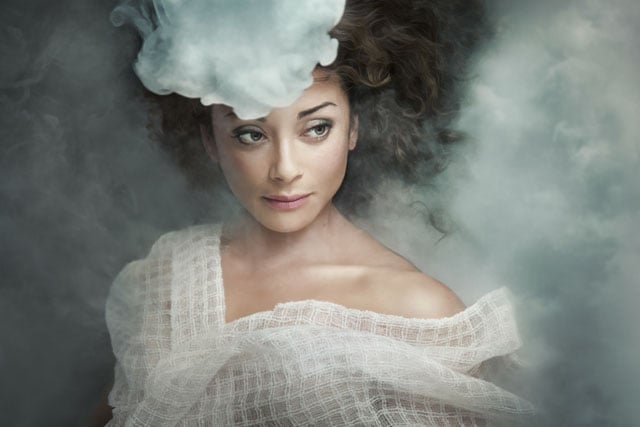 Here’s a look at how I use dry ice in my photography. My goal with this article is simply to share my journey with this technique. In the images used as examples, no fog textures were used (unless noted) — basically, if you see fog, that’s how it was captured (minus the color work).

I’ve been fascinated with the use of fog in photography for some time. Last year I experimented with a fog machine that uses liquid fog,
with some interesting, yet not very easily controllable results. The fog machine produced fog that rises, so it looks more like smoke rather than fog.

The next step for me was to chill the fog produced by the machine. It was done by attaching a cooler with ice so the fog had to go through the cooler prior to it appearing in the scene. Some un-chilled fog was escaping though the walls of the fog machine itself, so the result was twofold, as you can see in this image: 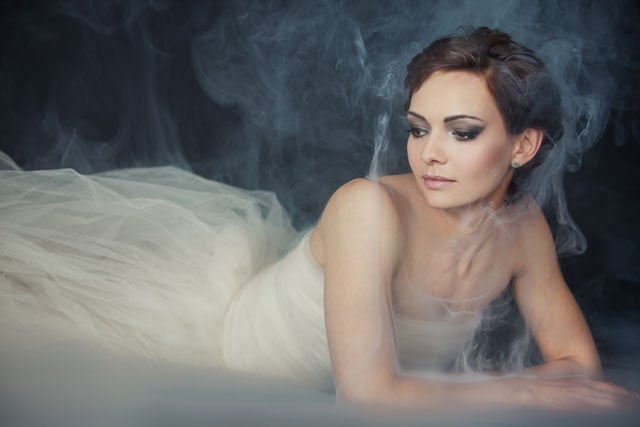 This year I have begun experimenting with dry ice. I’ll usually get 5 pounds of it, and most of the time half of it is left unused by the end of the shoot. It’s very affordable: I’m getting my 5 pounds for less than $8 from a local vendor.

Safety was one of the concerns of mine, so I’ve researched the subject for some time prior to exposing myself (both as a photographer and a model) and other people to it. I hope safety is your concern as well, and that as a responsible person you’ll do your homework. And please, please make sure anyone in your studio who comes into contact with dry ice knows what they are dealing with.

I’ll touch on 2 aspects of safety: exposure and handling.

Dry ice is solid, frozen carbon dioxide — the same gas that we exhale. Ever been in a stuffy room for some time? Then you’ve experienced some of the effects of CO2 concentration: headaches, difficulty breathing, nausea. Too much carbon dioxide gas can cause asphyxiation and even death. By the way, drinking too much water can cause hyponatremia and even death. So again, do your homework.

To help you, here are some resources I came across: Safety 101, Carbon Dioxide Tolerance and Toxicity, and an article on smoke and fog hazards.

If you’ll touch dry ice with your bare skin, you’ll likely get burned. So gloves are a must — never come in direct contact. That’s all for handling.

How to Apply This Information

Now, onto the fun stuff!

Using the Dry Ice for Fog

You can produce fog by putting dry ice in hot water. The hotter the water, the more fog you’ll get. More water and less dry ice is better than the opposite. Here’s how it looks: 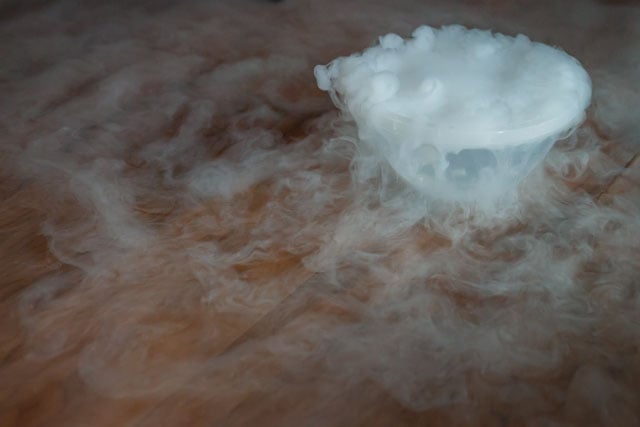 Cold goes down, warm goes up. My first use of dry ice was outside, with the temperature below freezing. I was getting a smoke effect, like on the stairs in this image: 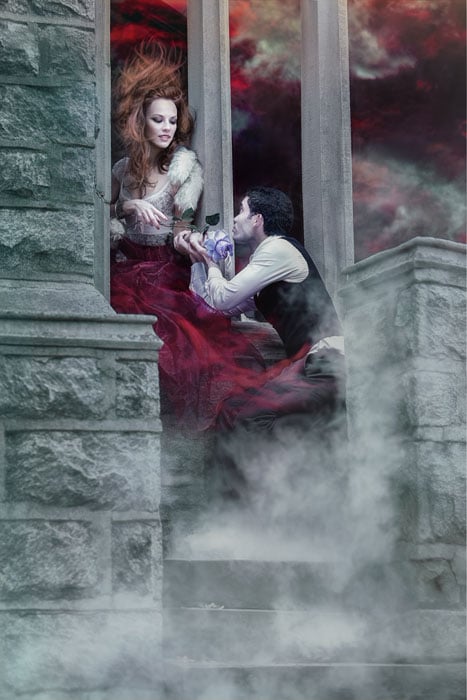 When used in warm environment, fog goes down and accumulates. It spreads quickly and forms a very thin layer. 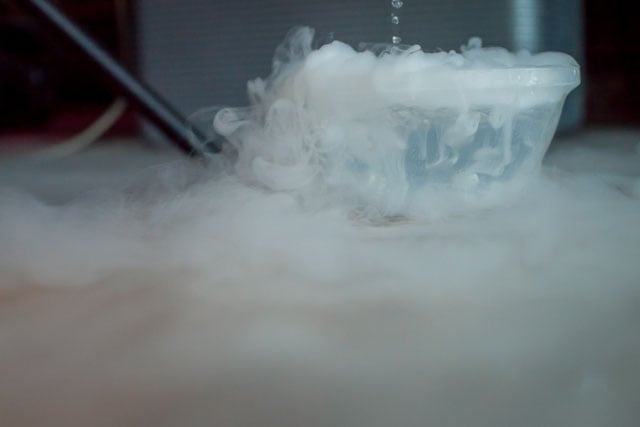 I wanted to emulate the effect of adding milk to water. I, with help of my model, built paper walls that provided an enclosed space for the fog to accumulate. We used 2 bowls on the left and right of the models for these shots, allowing the fog dissipate around the models on its own – no fanning business. 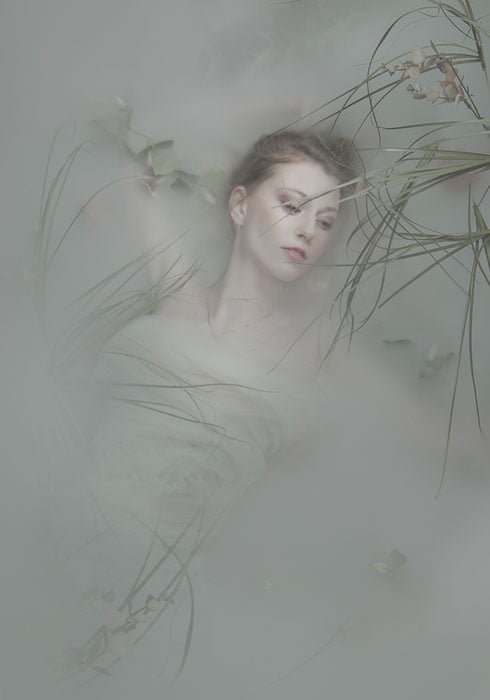 In this next photo, although it looks as if the model was sitting, in reality she was lying on her back — the “hat” is just a puff of a cloud from one of the bowls.

The fog dissipates very quickly, as you can see here: 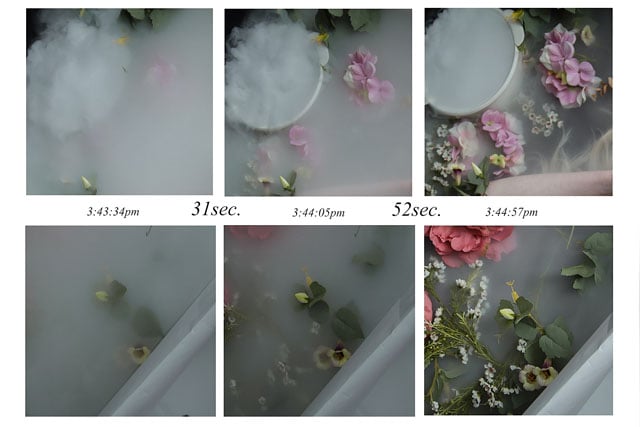 When the fog floats downward, it gives a different picture. For this next photo, a bowl with hot water was on a table and the model was sitting below: 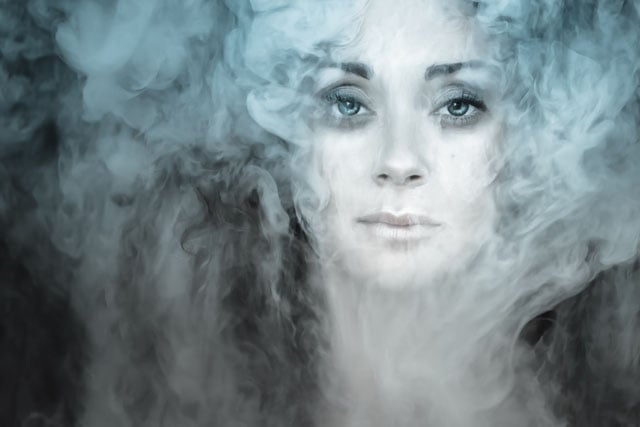 There are a few more things worth mentioning:

While it’s possible to work with dry ice on your own (and in my first studio trials it was just me, preparing fog, photographing and modeling), it’s way easier with an assistant, and that way you’re not losing precious seconds.

From reports from models and clients I worked with and my own observations: people have different experiences with fog, from pleasantly cool to cold. I usually use half of my 5 lbs bag, doing 3-4 sets during the shoot. Each set lasts no longer than couple of minutes, so be prepared.

About the author: Tatiana Lumiere is a fine art conceptual photographer based in Wayne, Pennsylvania. She specializes in glamour portraits with a dreamy, elegant, and sensual twist. You can find more of her work on her website and blog. This article originally appeared here.

Olympus Air: A 16MP Camera That Uses Your Phone as Its Live View Screen