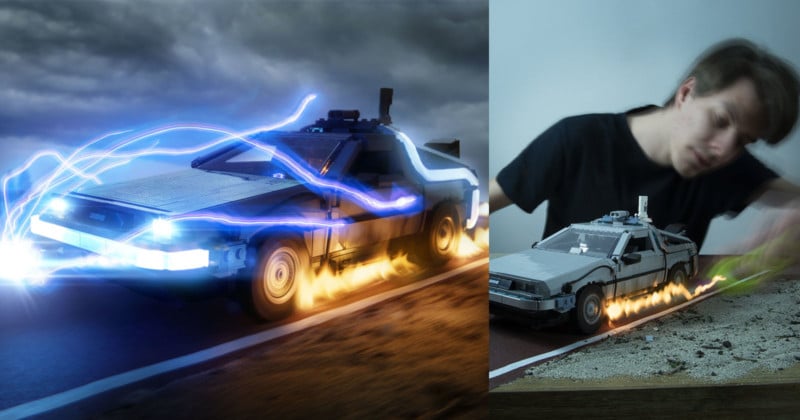 Hungarian photographer Benedek Lampert has shot a beautiful series of photos paying homage to the iconic science fiction movie Back to the Future. What’s neat is that each of the images was created with a LEGO DeLorean car and simple practical effects.


“Back To The Future is my childhood, and a movie that I can watch anytime,” Lampert tells PetaPixel.

LEGO has announced a new $170 “Back to the Future Time Machine” set for building a DeLorean, and Lampert was able to get his hands on a pre-release set thanks to his ongoing work with the toy company — LEGO hired Lampert a while back after seeing his miniature toy photography and had him shoot LEGO Star Wars photos.

After building the LEGO car re-watching all three Back to the Future movies for inspiration, Lampert set to work creating realistic photos on a small scale with his tiny DeLorean.

The DeLorean Jumping Through Space-Time 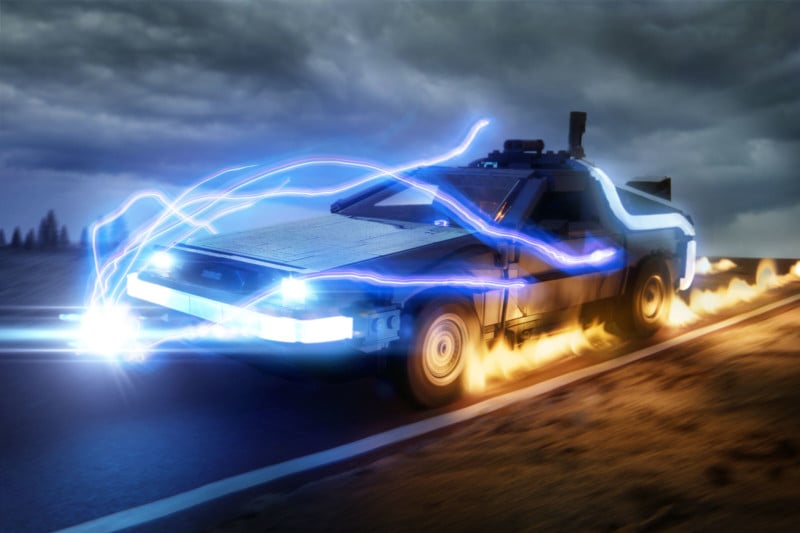 “The first picture was obvious. That moment when the time machine is jumping through the space-time continuum,” Lampert says. “I wanted to create the special effects in real, in front of the camera. This is my main principle with every picture. Doing as much as I can in real [life]. That’s why these photos are still photos and not digital art.

“Of course, I use post-production, and color grading is one of the most important parts if you want to get a cinematic look.” 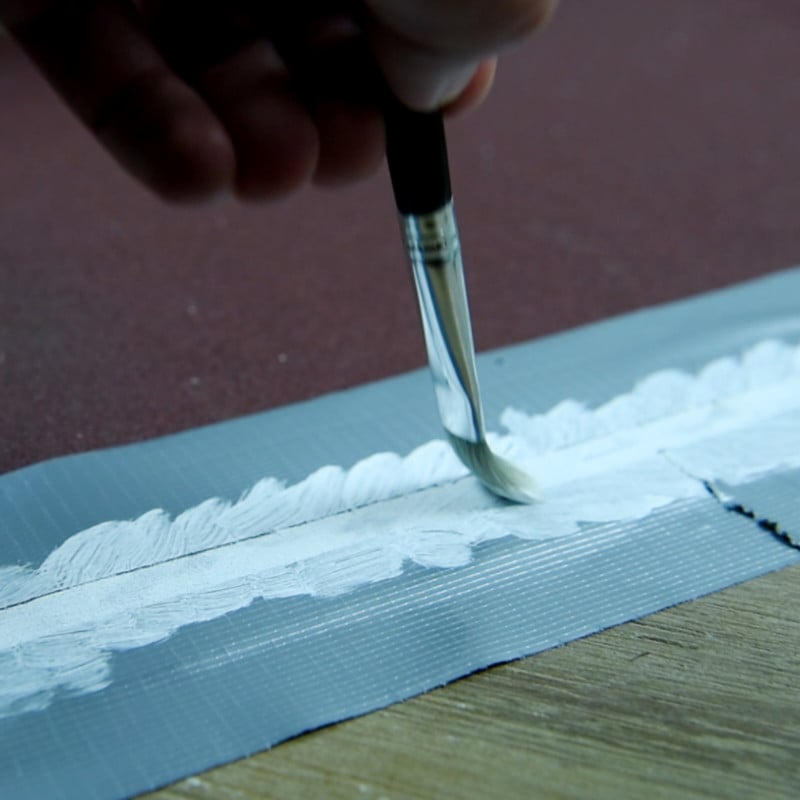 For the car’s headlights and taillights, Lampert used light-up LED parts from Lightailing. 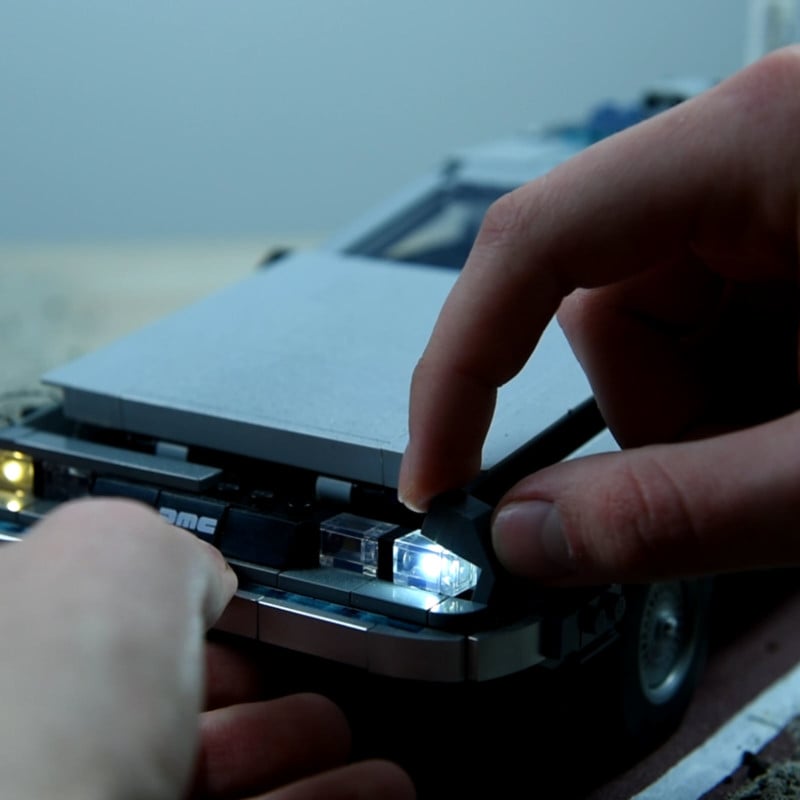 To create lightning and flames, Lampert turned to light painting, the practice of creating light trails in a long-exposure photo by moving points of light through the frame while the image is being captured. 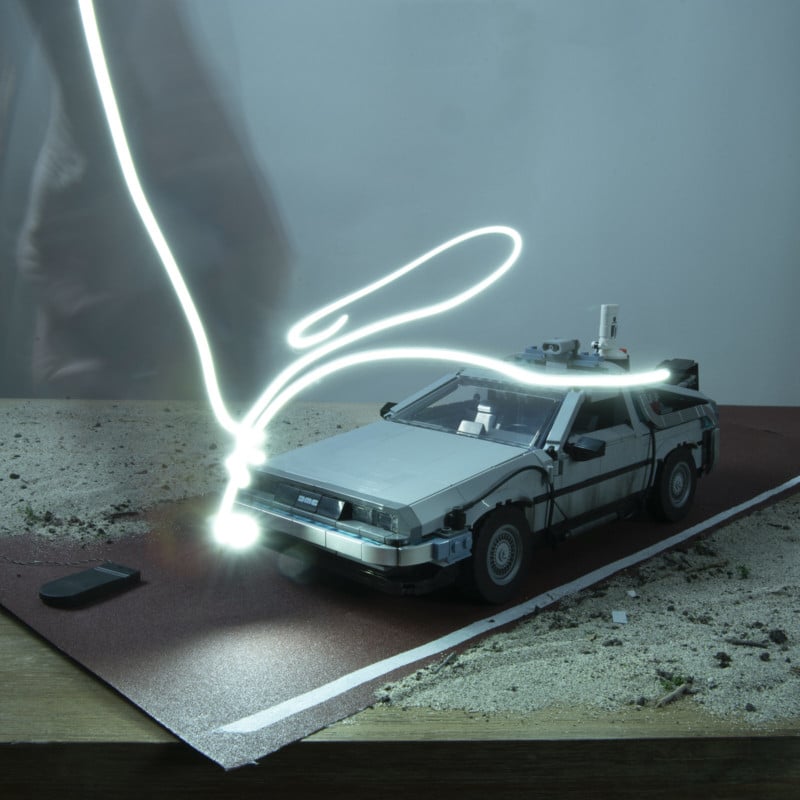 “The light painting technique was the solution,” the photographer says. “I used a simple lighter for the flames and a LED strip for the electricity. I had countless attempts and experiments to reach the perfect flames and lightning.

“Because of these practical effects, I can’t avoid using Photoshop for the motion blur. Other times I get the motion effect with a rolling platform under the vehicle, but it wasn’t possible with light painting.” 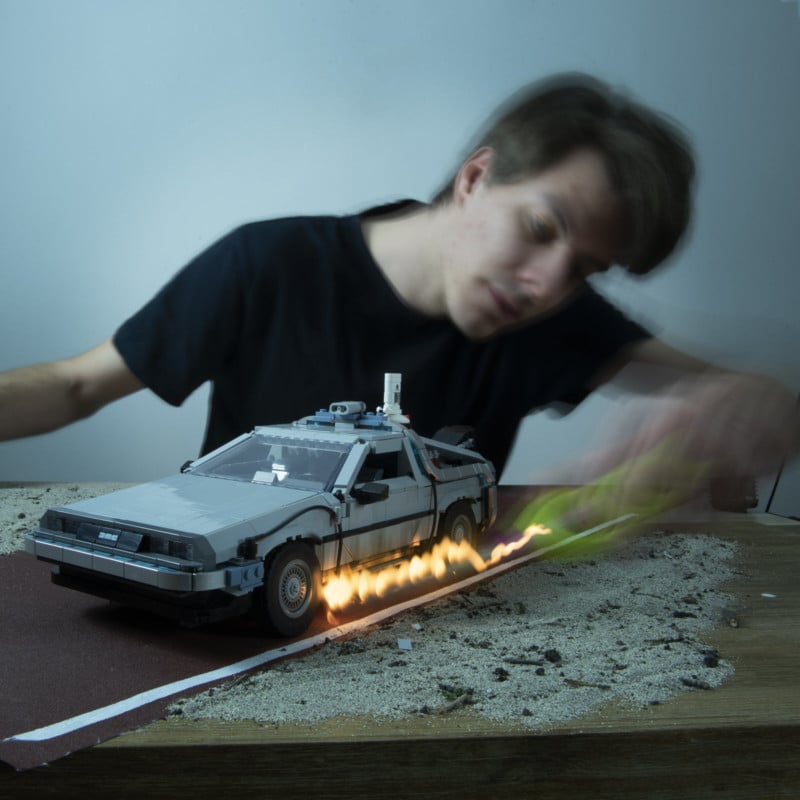 The DeLorean Covered in Steam 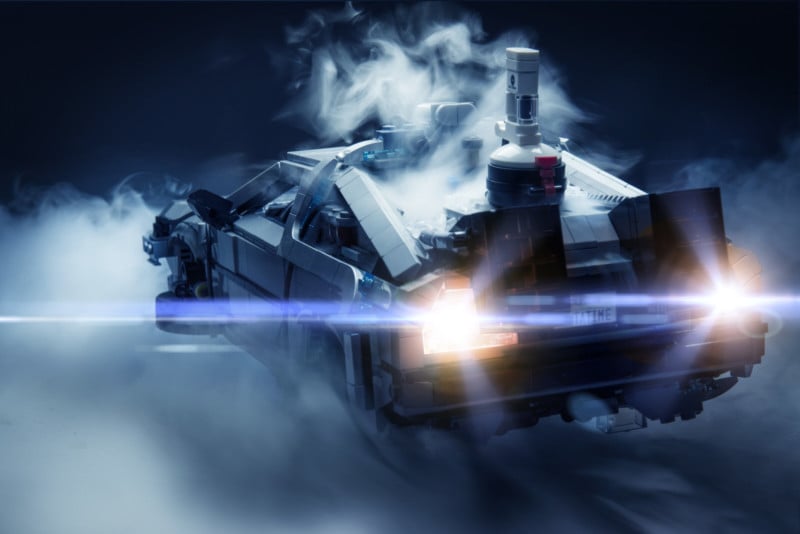 The second photo in the series shows the time-traveling car covered in steam after its journey through space-time.

“The second picture is a bit dreamy,” Lampert says. “Not a classic movie scene. It’s more about the design and a little bit mysterious.”

The secret to the “steam” was a large amount of dry ice. 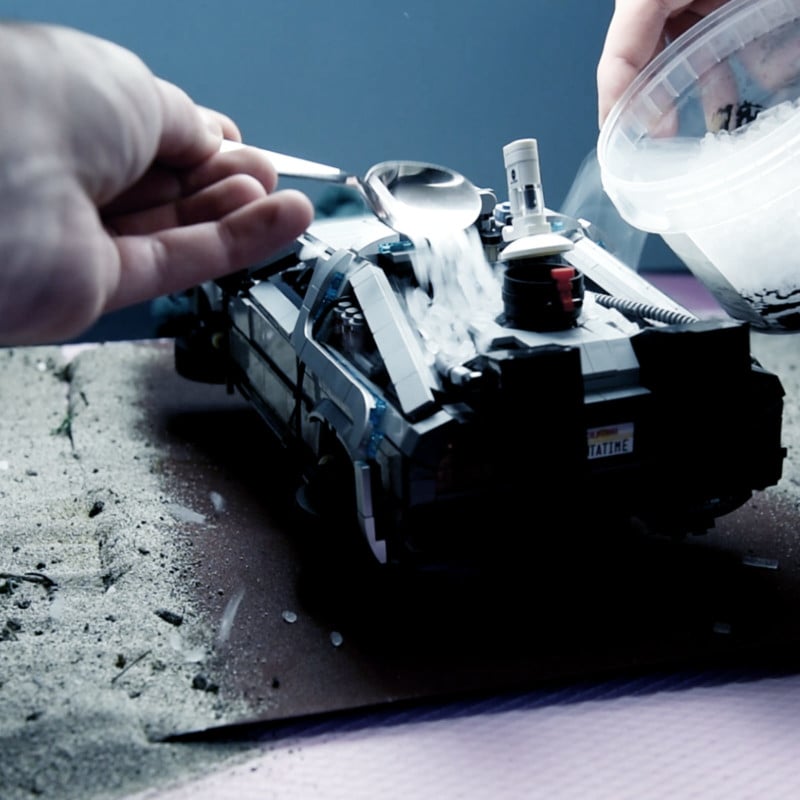 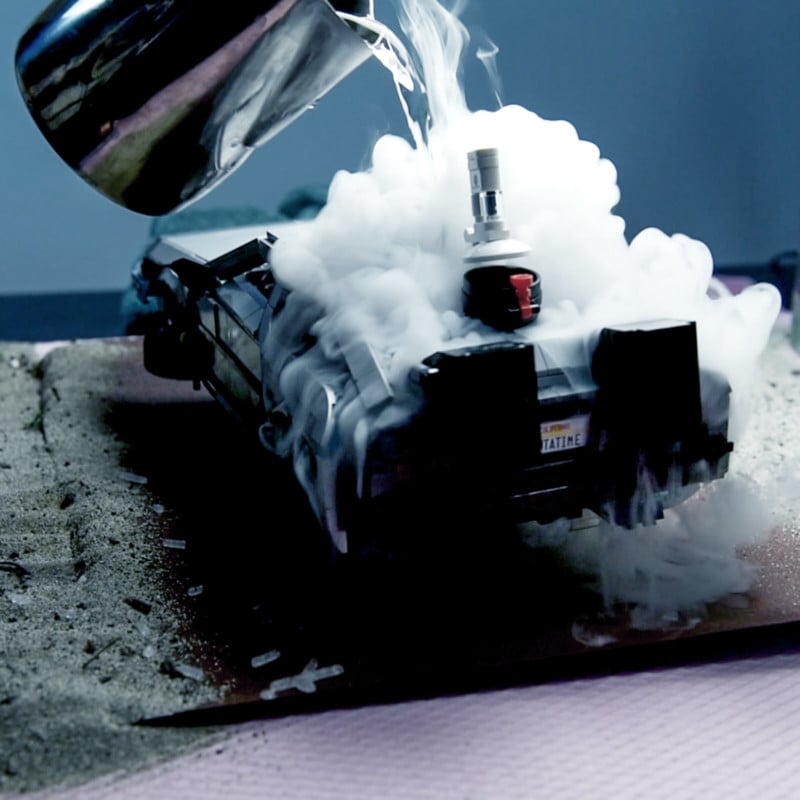 “I have bought 10kg [22lbs] of dry ice to get this massive steam. They created this effect with dry ice even in the original movies. That was the first time I have worked with stuff like this, so I had to face some difficulties. For example, when I poured hot water on the ice the whole scenery and the table was soaked.”

“On the other hand, it was really fun, and I am sure I’m going to use this dry ice technique many times in the future,” the photographer says. “In this picture, everything is real except the car lamp flare.” 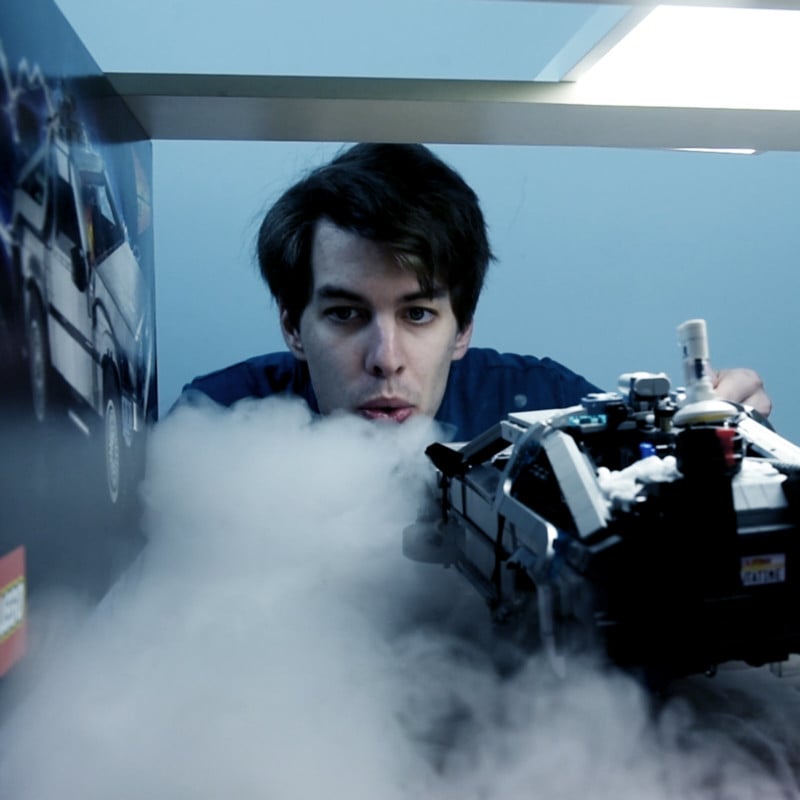 The DeLorean in the Desert 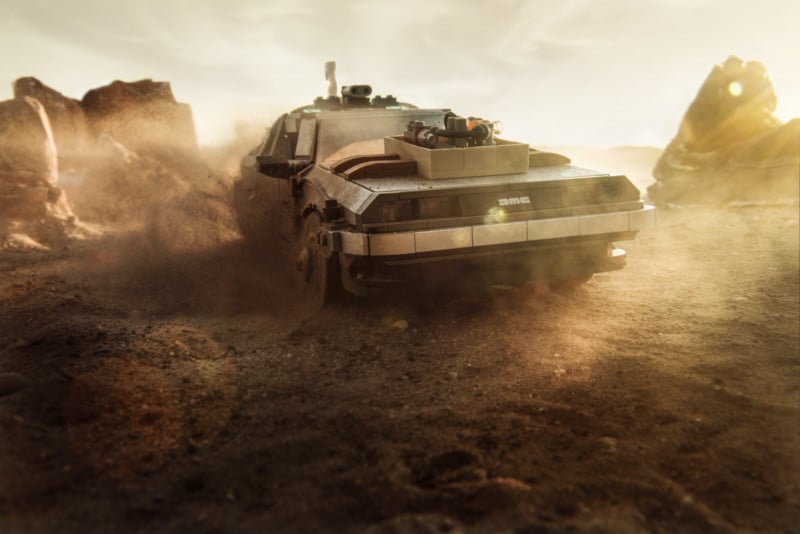 The third and final shot in the series is a desert scene that pays homage to Back to the Future III.

“The third part of the Back to the Future movies is a masterpiece mixed with the western feeling,” Lampert says. “With this set, you’re able to build all three versions of the DeLorean. So I put the western accessories on the car and went outside.

“There is a big field nearby where the conditions were perfect for this wild west image. I brought some scenery parts with me and set up a prairie environment. After that, I used the dust of the ground and Atmosphere Aerosol for the flying, smoother dust. In this image every part is real.” 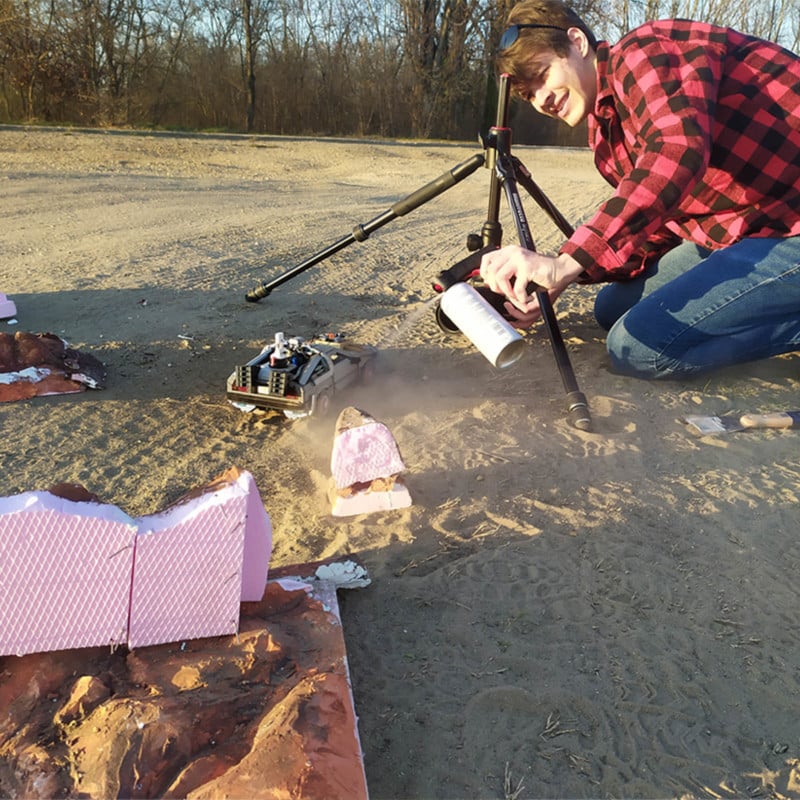 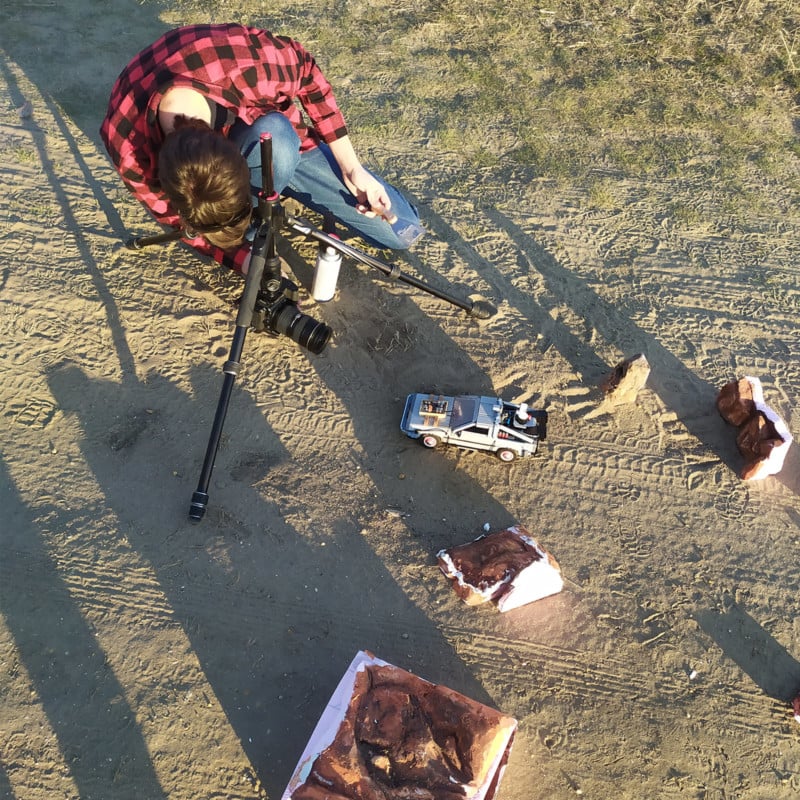 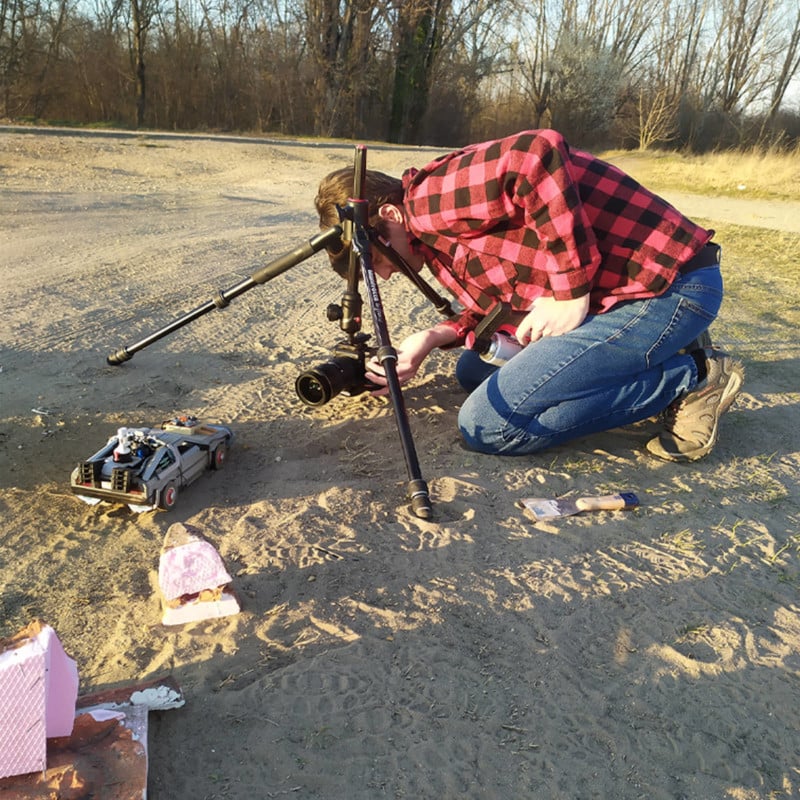 Here’s a 4-minute behind-the-scenes video showing how each of the photos was shot with practical effects:

You can find more of Lampert’s work on his Instagram.