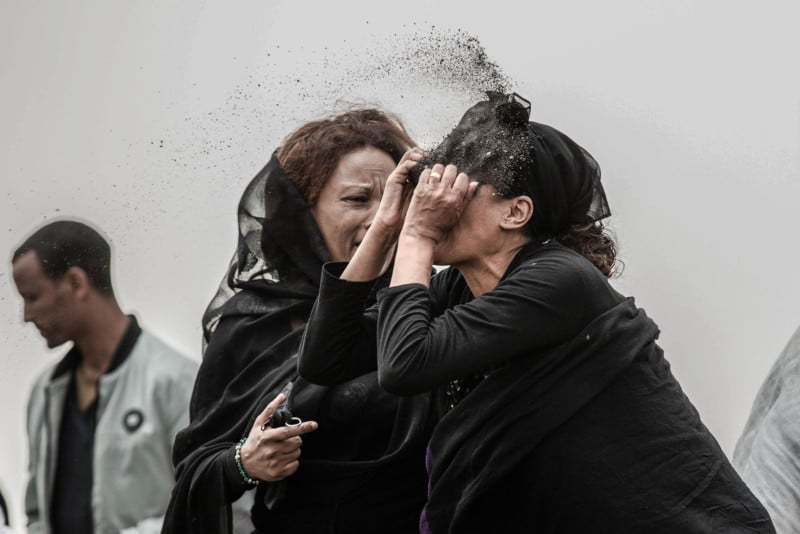 Late Winter brings about a new crop of contest winners and nary a season goes by without a whiff of controversy in some form or fashion. Yesterday World Press Photo announced its 2020 Photo Contest and Digital Storytelling Contest nominees.

The #WPPh2020 Photo Contest and Digital Storytelling Contest nominees have been announced!

Over the next three weeks, we’ll be sharing the nominated stories on our Instagram account: https://t.co/MEn1J4zyoM pic.twitter.com/pCEoMev82i

Among the fifteen images selected as nominees was a photo by Mulugeta Ayene who covered the tragic aftermath of Ethiopian Airlines flight ET302 — one of two downed Boeing 737 MAX airplanes.

It’s a decisive moment to be sure with a caption that explains the action, “A relative of a victim of the crash of Ethiopian Airlines flight ET302 throws dirt in her face as she mourns at the crash site, on 14 March.”

A relative of a victim of the crash of Ethiopian Airlines Flight ET302 throws dirt in her face as she grieves at the crash site of Ethiopian Airlines Flight ET302, outside Addis Ababa, Ethiopia, on 14 March 2019. ⠀⠀⠀⠀⠀⠀ ‘Relative Mourns Flight ET 302 Crash Victim’ by Mulugeta Ayene (@mulugetaayene), Ethiopia, Associated Press (@apnews). One of six World Press Photo of the Year nominees. ⠀⠀⠀⠀⠀⠀ On 10 March, Ethiopian Airlines flight ET302, a Boeing 737 MAX, disappeared from the radar six minutes after take-off from Addis Ababa airport and crashed into a field, killing all 157 people on board. The impact was so great that both engines were buried in a crater 10 meters deep, and any human remains were almost impossible to identify. On 14 November, eight months after the crash, the site of the impact was covered and the unidentified remains of victims buried in rows of identical coffins. Comparisons were made with the crash of a Lion Air aircraft, also a 737 MAX, 12 minutes after take-off from Jakarta in October 2018. Countries across the world, initially with the exception of the US, grounded the 737 MAX. First reports showed that pilots had been unable to prevent the plane repeatedly nosediving, despite following procedures recommended by Boeing. It appeared that in both cases pilots were struggling to deal with an automated safety system designed to prevent stalling, which was repeatedly pushing the nose of the plane down. It seemed that the system was being activated, possibly due to a faulty sensor, even though nothing was wrong. It later emerged that American Airlines pilots had confronted Boeing about potential safety issues with the MAX. Boeing had resisted their calls but promised a software fix, which had not been done by the time Flight ET302 crashed. Planes remained grounded into 2020. ⠀⠀⠀⠀⠀⠀ – ⠀⠀⠀⠀⠀⠀ The 2020 Photo Contest & 2020 Digital Storytelling Contest nominees have been announced! We’re sharing the nominated photos in alphabetical order. Discover the stories that matter, chosen by an independent jury by following the link in our bio. ⠀⠀⠀⠀⠀⠀ The winners will be announced on 16 April. ⠀⠀⠀⠀⠀⠀ #WPPh2020 #worldpressphoto

But if you look at the figure behind the two women on camera left, you’ll notice a strange halo that only seems to extend around his head and the collar of his jacket. It doesn’t look like typical chromatic aberration, which usually expresses itself as purple fringing. 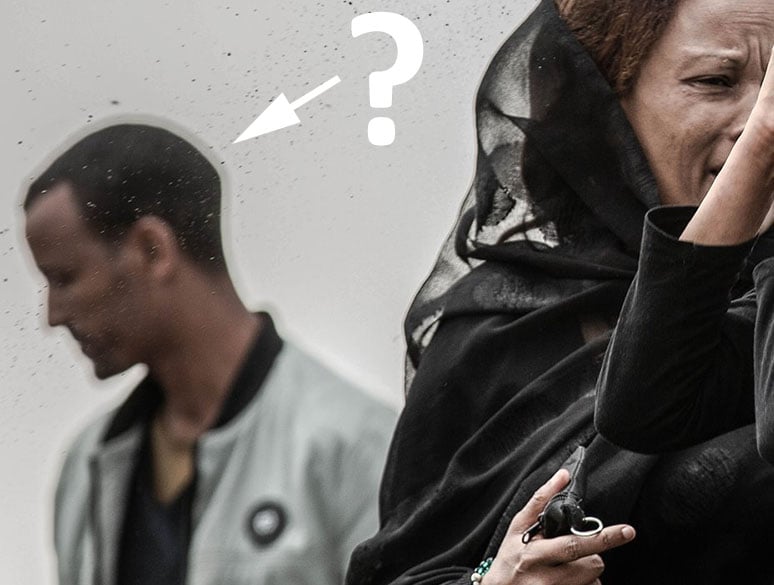 There could be a perfectly reasonable explanation, but no technical information other than the camera model (Canon 5D Mark III) is included with the image description.

I feel incredibly honored to be nominated by the @WorldPressPhoto among the other amazing photographers. This was a very emotional assignment, being very close to so much pain by grieving family members. pic.twitter.com/L9gRLYC9R2

Secondly, photo contests need to be in the business of transparency if they want to avoid controversy. If the jury saw this aberration and decided it didn’t need to be explained, I think the organization should reconsider its position. Photo contests are constantly under criticism (this piece is no exception), and they need to de-risk their relationship with a skeptical public by erring on the side of overcommunication.

Finally, for those who don’t understand what the big deal is, consider that even though we bandy about the term “fake news” with abandon, most journalists and photojournalists work within an ethical framework set out by their professional organizations and/or publishers. When a visible aberration like this halo appears without explanation, we have to wonder what else might have been edited within the frame.

Editor’s note: We reached out to photographer Mulugeta Ayene a couple of days ago for comment but have yet to hear back. We’ll update this post if he provides an explanation.

Update: Here’s World Press Photo’s response to our inquiry regarding this photo:

Travel Without Traveling for Street and Documentary Photography