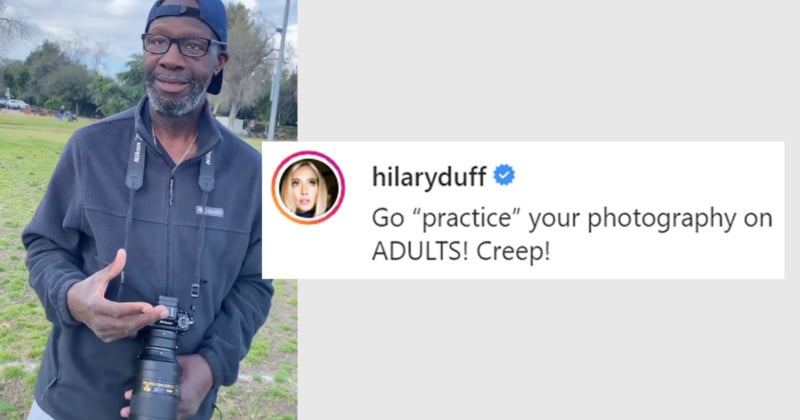 American celebrity Hilary Duff enlisted her 15 million Instagram followers to shame a photographer this past weekend. His offense? Practicing his photography by shooting a kid’s football game at a public park.

It all started this past Saturday after the star noticed a man photographing her 7-year-old son’s football game. She turned on her smartphone camera, marched over to the man, and confronted him about what he was doing.

Go “practice” your photography on ADULTS! Creep! Laws need to change! This is stalking minors! Disgusting!

“Who are you here with?” Duff asks the man, who is seen holding a Nikon Z Series mirrorless camera and telephoto lens.

“Do you know any of the people on the team? No? Can you stop taking pictures of the kids please?”

“It’s legal,” the man counters, offering to show ID. “I’m taking pictures. I’m practicing photography. I’m not here to scare you or anything like that. Your paranoia is unwarranted.”

“It’s just an uncomfortability factor that these are 7-year-old children and you don’t have a child here,” Duff says.

“What’s that got to do with anything?” the photographer asks.

“Well, there are children and we would like to protect them,” Duff says. “So if you could take pictures and practice your photography somewhere else…”

“Me taking pictures of them… is not… What about other people?” the man asks.

“Okay, then I will just post this to my 15 million followers on Instagram and let people know how creepy it is that this is what you’re choosing to do on your Saturday morning,” Duff says.

The 32-year-old Duff ended up calling police to report the man and was disappointed to learn that they wouldn’t do anything about him.

“[T]he police were, you know, pretty dismissive of me, saying, ‘What do you want us to do? You’re at a public park,'” Duff states in a followup Instagram Story posted yesterday. “Well yeah, I’m at a public park, I’m at a place where kids play and kids should be safe here.

“It’s just extremely strange and inappropriate and creepy to have a man photographing our 7-year-old children and that to be completely legal.”

Duff says she would like laws in the US changed to allow parents to stop photographers shooting in public places.

“Like, if a parent is asking for it to stop, the laws should be changed for you to not be able to photograph that person,” she states. “If those kids are a subject of your ‘photography’ practice, over and over and over again for minutes or half-hour, however long it was, and you ask someone to please stop that, you should have that right. And we really need to work on changing that law.”

(via Hilary Duff via Fstoppers)

P.S. Here’s an invaluable PDF titled “The Photographer’s Right” that spells out your rights as a photographer in the US.

Update on 2/22/21: Photographer Darryl Wilkins has filed a lawsuit against Hilary Duff, accusing her of defamation.

Update on 2/23/21: This article originally stated the Duff’s son was playing soccer. He was playing football, and the text has been updated to reflect this.