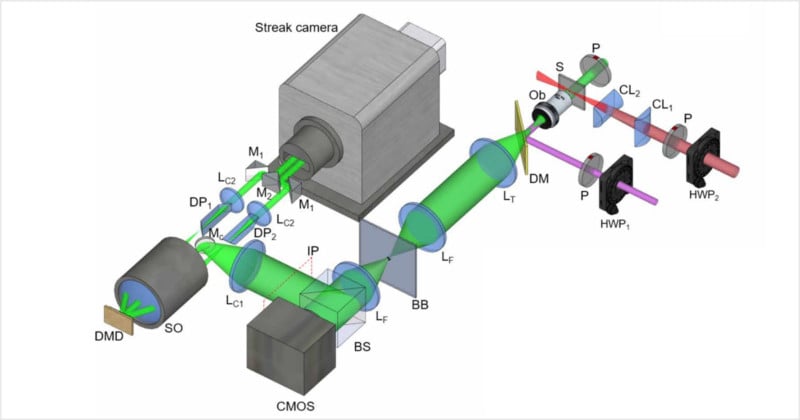 We crossed the 1 trillion frames-per-second barrier a while back, but a group of Caltech scientists just made another leap. Their new camera doesn’t just shoot up to 1 trillion fps, it can do it while capturing transparent objects like neurons and invisible phenomena like shockwaves.

The camera does something called phase-sensitive compressed ultrafast photography (pCUP), which combines a previous breakthrough that allowed for 1 trillion fps photography with a 100-year-old photographic technique called phase-contrast microscopy. Put together, these two technologies allow scientists to capture “transparent” phenomenon that last nanoseconds: like shockwaves or electrical signals as they travel down a neuron.

The breakthrough was detailed in a new research paper that includes the two examples below. The first shows a shockwave caused by a laser “striking” some water; the second shows a laser pulse traveling through a piece of crystal.

Of course, this isn’t the kind of technology we’ll see applied to commercial photography… possibly ever. But the potential research applications for physics, biology, chemistry and beyond are fascinating.

“As signals travel through neurons, there is a minute dilation of nerve fibers that we hope to see,” explains Caltech’s Lihong Wang, lead researcher on the project. “If we have a network of neurons, maybe we can see their communication in real time.”

To learn more about this incredible camera technology or dive deep into the research behind it, head over to the Caltech website or read the full research paper at this link.

Image credits: All photos and GIFs courtesy of Caltech.

Canon is Planning to Release a Crop-Sensor EOS R in 2021: Report