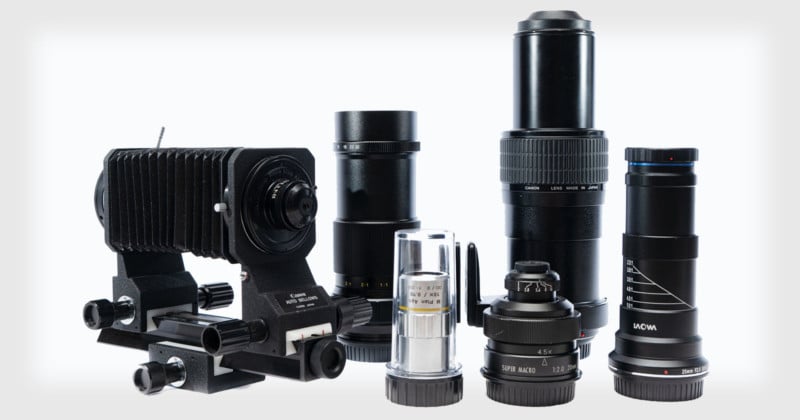 For a long time, there weren’t many options for high magnification macro photography without resorting to solutions like lens coupling and reversals. The only lens on most photographer’s radar was the Canon MP-E 65mm f/2.8 1x-5x Macro. There were also other options, however, so let’s take a look at how the MP-E 65 compares to more modern and vintage lenses to put to 5:1 magnification and beyond – using a butterfly wing.

There are six lenses in this test: 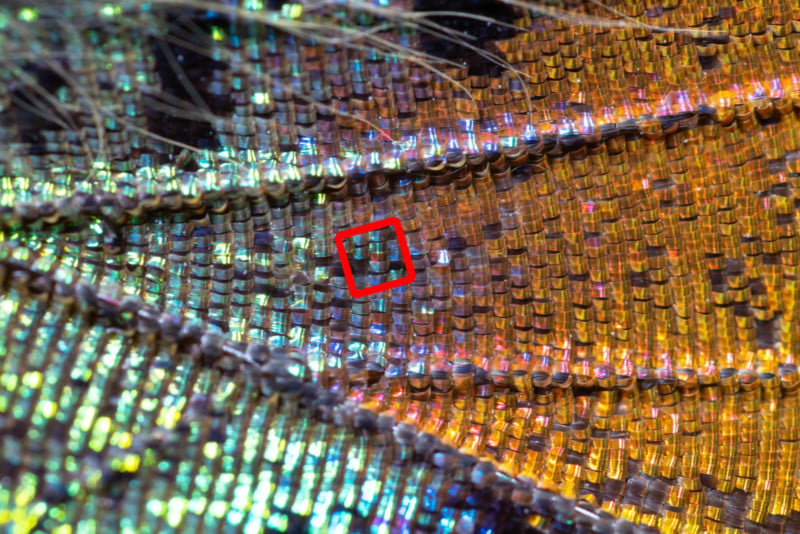 This test involves a portion of the wing from a Chrysiridia rhipheus, the Madagascan Sunset Moth. Chosen for this experiment because it has color scales that transition quickly and vibrantly from one hue to another in a specific area of the wing. The scales also have small lines running down their length, making for a very good test of optical resolution.

In order to test resolution, each lens is shot both wide open and stopped down to f/5.6. All lenses capable of shooting at 5x were set to that, and others were scaled to that size for a more direct comparison. 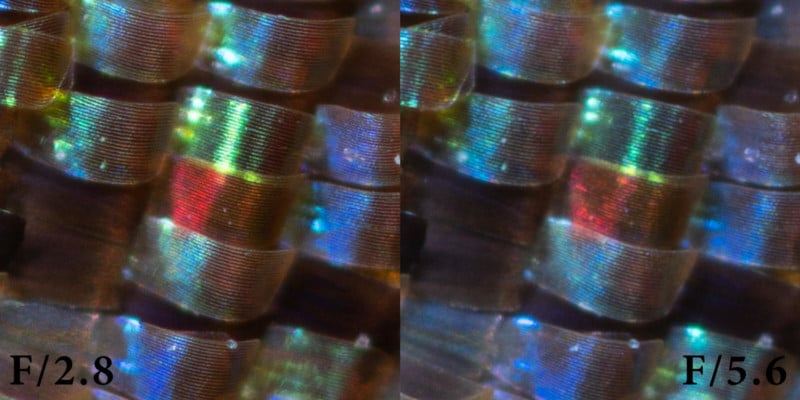 A workhorse of a lens, one of my favorite macro lenses ever, but a design that has no modern technology – originally debuting in 1999. Still, it’s the benchmark in this test. We can see plenty of detail and good color rendition, and the lines on the scales are clearly visible. While there is some degradation of detail when stopped down slightly, this is due to diffraction.

Page 8 of the manual for this lens gives a handy conversion chart from dialed-in aperture to effective aperture, which changes as magnification increases. f/5.6 at 5:1 magnification is actually f/33.6, which would be diffraction limited on the 47MP sensor that these images were taken with. No fault of the lens – we’re just bending light too much. 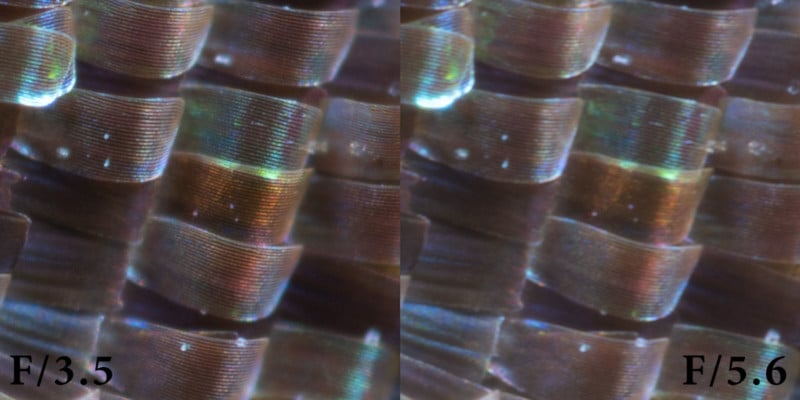 Originally released alongside a 35mm f/2.8 lens way back in 1976, this lens is capable of 2x-10x magnification on a Canon Auto Bellows. It’s a great example of high-magnification technology from over 40 years ago and can show us how far we’ve come. Remarkably, the resolving power is quite good!

The colors are slightly muted, though to some degree this is due to a change in lighting angle and specular reflection into the lens. This lens requires a bellows to be used properly, so it’s a bit big and bulky for every use case. Stopping down brings a loss of details. The hipster vibe is strong with this one. 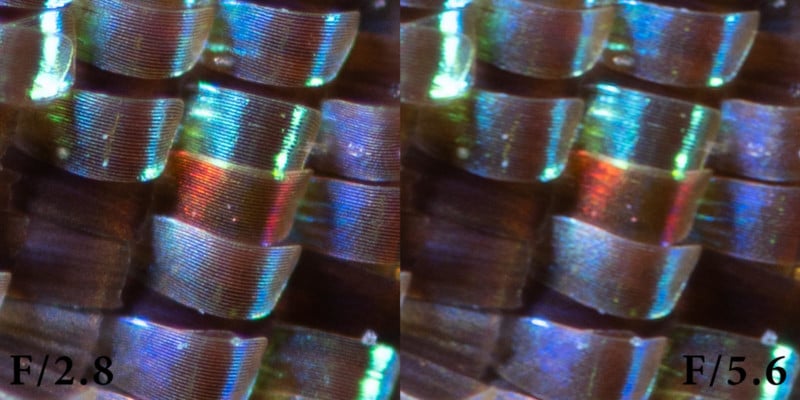 A newcomer from Venus Optics, the Laowa 25mm macro doesn’t have the same level of flexibility in magnification range as the Canon MP-E 65, but it’s certainly a contender. Dare I say it’s just as sharp? Wide open, anyhow. Detail falls off much more at f/5.6 than the Canon MP-E 65. This lens also does not have a filter thread, a design flaw in my opinion – it makes it difficult to attach a ring flash or macro twin flash to the front. 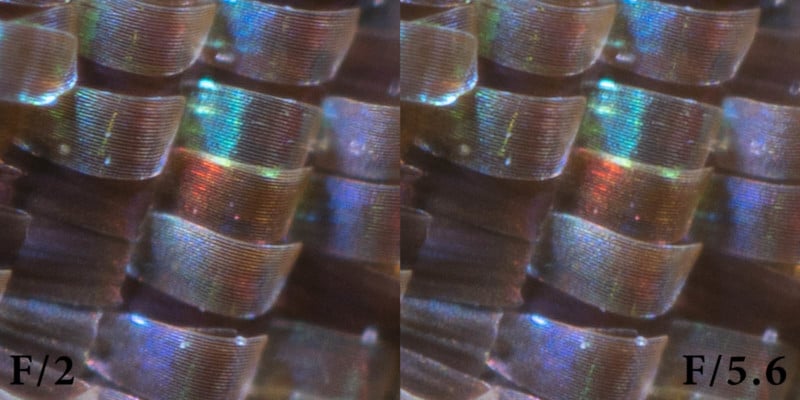 The first super macro lens from Zhong Yi Optics, an interesting inexpensive little lens that was confusingly engineered. Why have a barrel adjustment to go from 4x to 4.5x? That would be mostly useless to most photographers and greatly increase the engineering cost of the lens. If you’re going to over-engineer something… why in a THREE-blade aperture? Not sure who out there is clamoring for trigonal bokeh.

Optically, it’s about on-par to the Canon 20mm from yesteryear, performing better when stopped down. Also, no filter thread on this lens, limiting the flexibility. 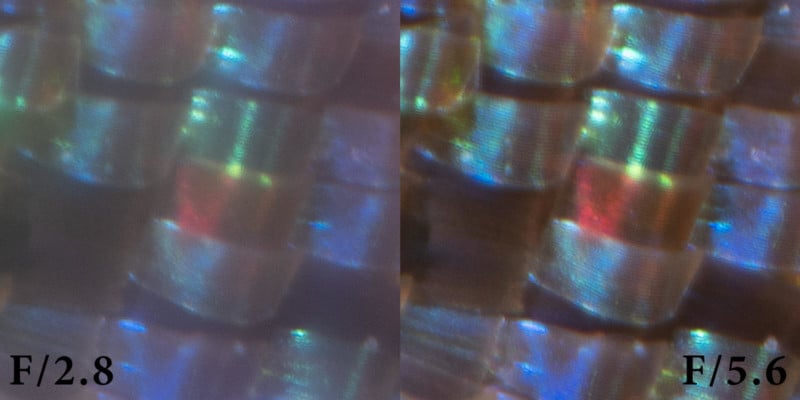 This lens is the whole reason I did this comparison – just announced, and on paper, it had the potential to usurp the Canon MP-E 65mm. At half the price! Smaller and lighter! Available in a variety of lens mounts! Like the opening weekend of a movie with a ton of star power but terrible direction, it falls flat almost immediately.

Wide open, it’s… it’s the worst macro lens I have ever tested. By a large margin. It’s foggy, blurry, hazy, and just wrong. Stopping down to f/5.6 helps a little, but this is where diffraction will start to claim quality in the best lenses. Even when stopped down, it’s still the worst lens, and for curiosity’s sake I also shot it at f/11 to see how things progressed:

It continued its downward spiral. I’m having a hard time believing how bad this lens is. I have talked to a few others who have recently received theirs, and it’s not just my copy. Do not buy this lens. Zhong Yi, what were you thinking? 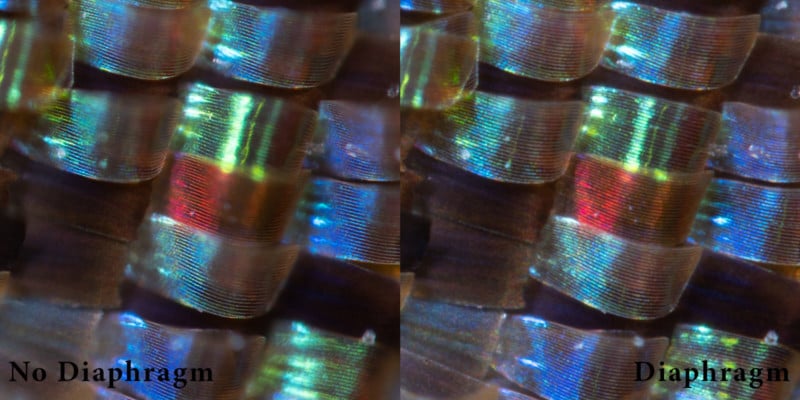 There are a lot of high-magnification macro photographers that will state that anything beyond 5x should be handled by a microscope objective. I tend to disagree in terms of usability, especially when shooting handheld as these objectives have such a drastically thinner depth of field in comparison, but that’s where the increase in resolution comes from.

Mitutoyo makes these objectives at 1x, 2x, 5x, 10x, 20x, 50x and 100x, but they aren’t often considered when people want a macro lens. Why? Most people don’t know how to attach them, but the process is incredibly simple:

First, get a regular lens that covers 200mm. All of these “long working distance” objectives from Mitutoyo state “f=200” on the barrel, but not that this number might be different with other lenses. I didn’t have a 200mm lens, so I invested $20 in a Canon FD 200mm f/4 on eBay. You’ll just need a step-down ring from whatever your filter thread size is, to M26. You’re done.

Set the 200mm lens to focus on infinity, and you can now shoot with your camera as if it’s a microscope. You can even add your own aperture diaphragm between the two lenses to sacrifice optical resolution for a greater depth of field – and you’ll want to keep the aperture inside the camera lens always open regardless.

Note: In the about image you can see a Canon MLA-DC1. This was originally designed for G-series cameras to mount a ring flash to them. It’s glued to the step-down ring to allow the mounting of a ring flash around the microscope objective.

The incredibly thin depth of field here makes it very difficult to handhold the camera. I’ve photographed snowflakes handheld at 20x and it was one of the most difficult things I’ve ever had to do with a camera in my hands. Being locked down on a tripod with a focusing rail is the best way to go here! Also – don’t buy a new objective. There is plenty of second-hand inventory often close to half of the retail price.

And the Winner Is… 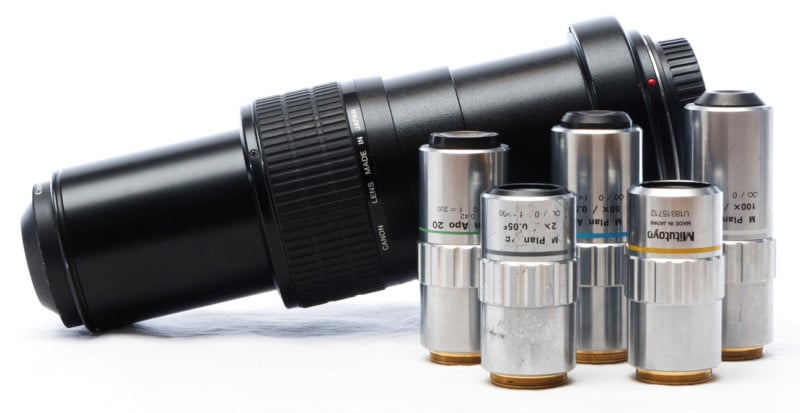 A tie. The Canon MP-E 65mm is still the king of the castle and continuing a 20-year reign, but if you’re after the ultimate in resolution and are willing to sacrifice on convenience and flexibility, grab a Mitutoyo microscope objective. The versatility afforded by variable magnification as well as how the lens performs handheld offers enough convenience and ease of use to overcome the additional resolving power of microscope objective for most people.

Some of the newer macro lenses from other manufacturers, especially the Laowa 25mm 2.5x-5x are very strong in comparison, but none have yet to take the crown entirely away from Canon.

Yes, yes, this list is not complete. There are many lenses that break the 1:1 barrier now, but this list was looking to the 5:1 range and beyond. Canon and Olympus both had additional bellows lenses, but I figured one would be sufficient for this comparison. Infinity Optical has the TS-160 which can get infinity focus all the way to 16x, but it wasn’t available and compound microscopes are a headache. Reversal adapters and lens couplers can work too.

P.S. There is more to this discussion! If you’d like to explore macro photography comparisons, tutorials and techniques, you might consider pre-ordering the book Macro Photography: The Universe at Our Feet.