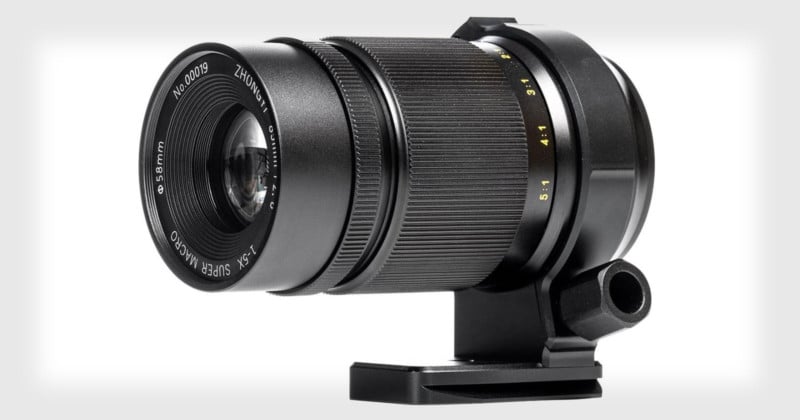 Late last year, macro photographers rejoiced at the announcement of a worthy competitor to the Canon MP-E 65mm f/2.8 1x-5x macro lens, which has been heralded as the best high-magnification macro lens since its release in 1999. The Mitakon 85mm f/2.8 1x-5x lens held a lot of promise, but it was immediately apparent that something was wrong.

In an article I wrote after the release of the lens, I compared it to an assortment of other lenses capable of achieving similar magnifications, and it performed so badly that I was left scratching my head. How could it be significantly worse than lenses from the 1970s?

Zhong Yi Optics, the manufacturer of the new lens, quickly halted sales to investigate what went wrong. Yesterday, the new lens arrived at my door. The difference in design is quite noticeable. Old lens on the left, new one on the right: 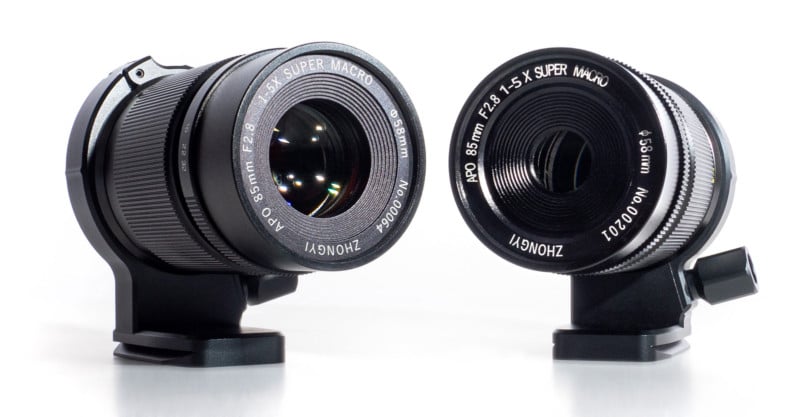 In speaking with a representative from Zhong Yi Optics, I was pleasantly surprised by their honesty… but was even more baffled as to how this happened:

We have identified the issue and believe [it’s] coming from a miscalculation of numerical aperture and in turn leads to additional unused light rays reflected into the lens, creating a much softer images. We have yesterday built [an] improved prototype and also compared against the Laowa 25mm f/2.8 lens. The result is much more comparable. Although it is hard to compare apple-to-apple due to the different numerical aperture (instead of physical aperture) we have with different working distances. But we can conclude is that the performance is so much better than the existing lens.

Yes, clearly the lens was designed incorrectly. If you look at the Canon MP-E 65mm and the Laowa 25mm high magnification macro lenses, they all have very small front elements, much like the redesigned Mitakon 85mm. My round-up review that included this lens was published on December 10th, and this response from Zhong Yi Optics — with a working revised prototype — was received on December 13th.

I’m not sure if I should be impressed or suspicious that such a fast revision was made, and one month later the new lens in my hands for testing.

The initial test used a butterfly wing, so it’s only fair that we compare the old and new lenses, with the Canon MP-E 65mm for further comparison. Lighting was constant, all images are taken at F/2.8 and at 5x magnification. Unlike ordinary lenses that typically get sharper when they are stopped down slightly, diffraction causes softening in all three of these lenses with high-megapixel cameras. Test setup used the Lumix S1R on a Novoflex CASTEL-Micro focusing rail. 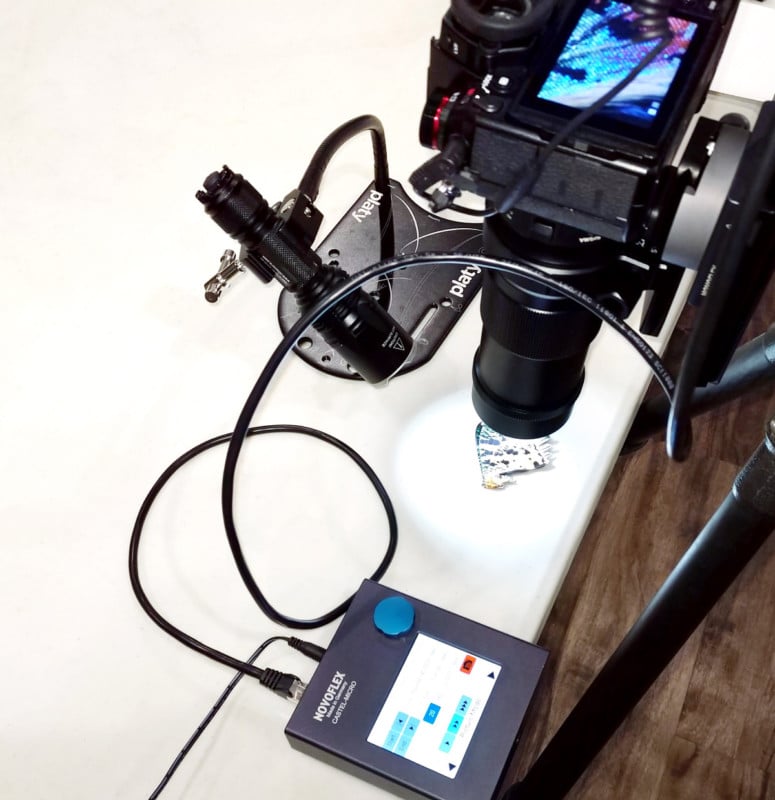 On the left is the “original” Mitakon 85mm, the center is the revised lens design, and on the right is the Canon MP-E 65mm. Please click on the image for a closer view.

You can clearly see the issues with the original lens design – soft, hazy details – if you can call them details at all. This is largely fixed in the revised design which is fantastic to see, approaching the quality of the Canon lens… but it doesn’t quite get there. On a lower-resolution sensor it might be harder to tell the difference.

The reason for this is unavoidable, and due to the longer working distance that the lens offers. In the butterfly example, the Canon lens had a shutter speed of 1/100sec, whereas the re-designed Mitakon had a shutter speed of only 1/40sec. A smaller numerical aperture will allow less light to enter the lens, but this also reduces resolution. The same thing can be seen in microscope objectives: you trade resolution for working distance every time. 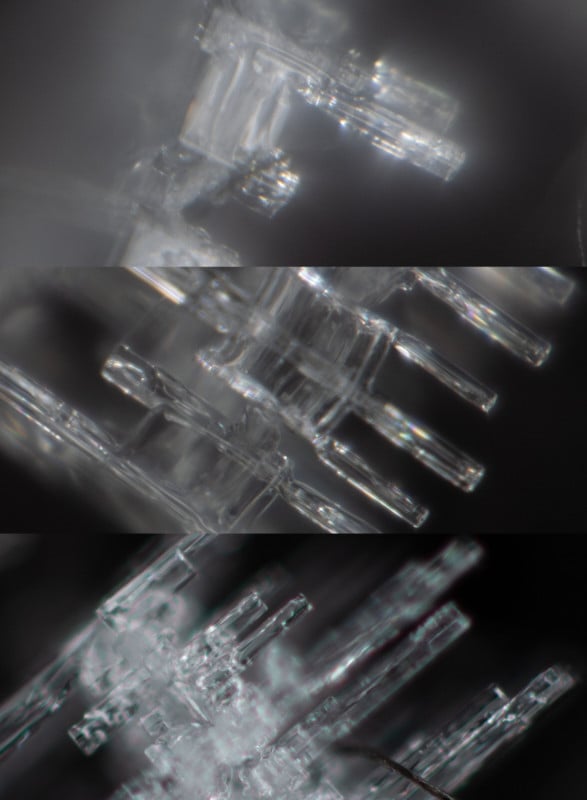 The above comparison is extremely magnified snowflakes – rare varieties of columnated plates that we falling yesterday, just in time for this test. The top image was the original Mitakon 85mm. Clearly visible is the defect, light clearly bleeding very far off of the crystal surface. The middle image is the designed lens – MUCH better results, though critical sharpness suffers when compared to the Canon MP-E 65mm lens at the bottom. All images are shot with a set of extension tubes (resulting magnification close to 6x) at f/2.8. While this example shows the lens’s slight weakness, it doesn’t show the strengths.

This lens has a longer working distance than the competition. At 5x, the distance from the subject is 10cm vs. 4cm on the Canon MP-E 65mm. This is significant, allowing for different lighting options. Snowflakes make a great example for this: 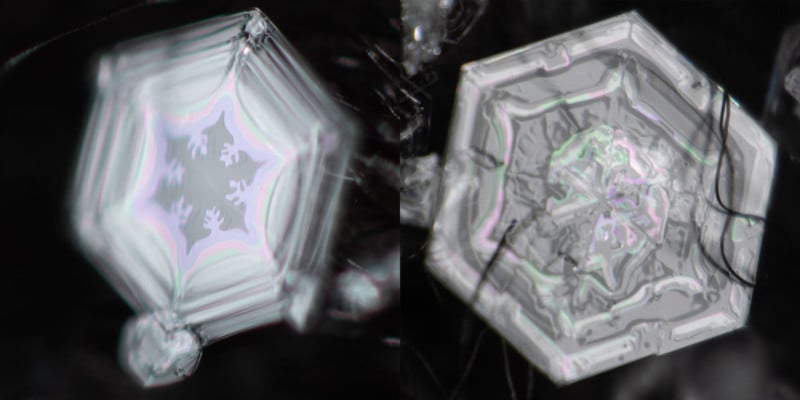 In order to get light reflecting off the surface of a snowflake, the snowflake has to be on an angle to the camera. This means that we only get a tiny sliver of focus, often requiring 30+ images for focus stacking. If the snowflake can be farther away from the lens however, the angle of the snowflake to the camera doesn’t have to be quite so extreme. This allows for much more of the crystal to be in focus and far less effort required for focus stacking. The left image is the Canon MP-E 65mm, the right is the Mitakon 85mm.

This is also a great comparison of lens aberrations. As the focus falls off, the Canon lens shows its age – green and magenta encompass the edges where there should be no color. While both of these snowflakes feature natural colors due to the physics of thin-film interference, the Mitakon 85mm does not exhibit unwanted colors in the out-of-focus regions. While critical sharpness isn’t perfect, the trade-off for subject flexibility is becoming more worthwhile.

The above snowflake image would not have been possible without the Mitakon 85mm, as getting reflected-light details on the surface of a very rare double-terminated arrowhead snowflake has eluded me for over a decade. This is a focus-stacked and “polished” image with enhancements to sharpness and texture using a variety of tools. It holds up.

I still cannot fathom how the original lens design escaped design, manufacturing, and testing with such an obvious flaw. It’s now fixed, and the lens is probably as good as it can be at the price of $499, less than half of the Canon MP-E 65mm lens used in this comparison. If you’re willing to sacrifice some of the tiniest details in exchange for more flexibility with your subject and with lighting, this lens is now worth reconsidering.

Oh, one last thing. While setting up the lenses for the butterfly wing comparison, something fun was discovered about the original Mitakon 85mm macro lens. When the scales were out of focus, the bokeh presented itself wonderfully. Reminiscent of the “soap bubble bokeh” seen from vintage triplet lens designs, some creatives might find it useful where sharpness isn’t the point. 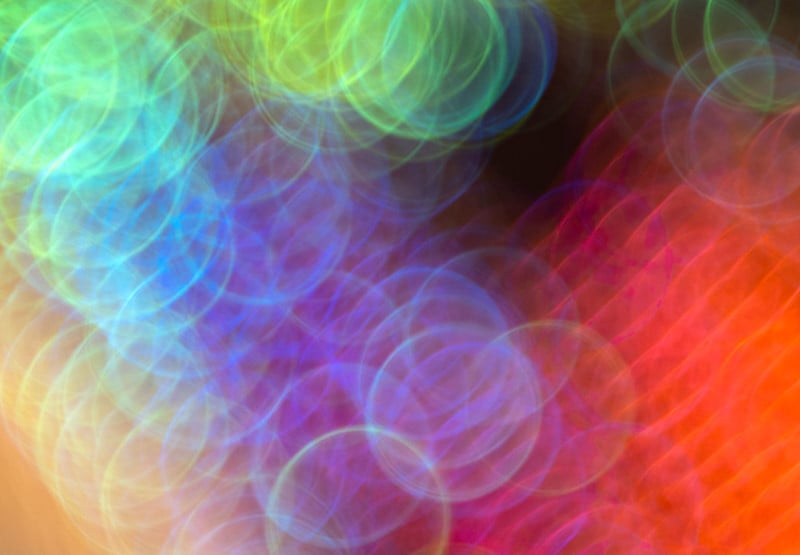 P.S. There is more to this discussion! If you’d like to explore macro photography comparisons, tutorials and techniques, you might consider pre-ordering the book Macro Photography: The Universe at Our Feet.