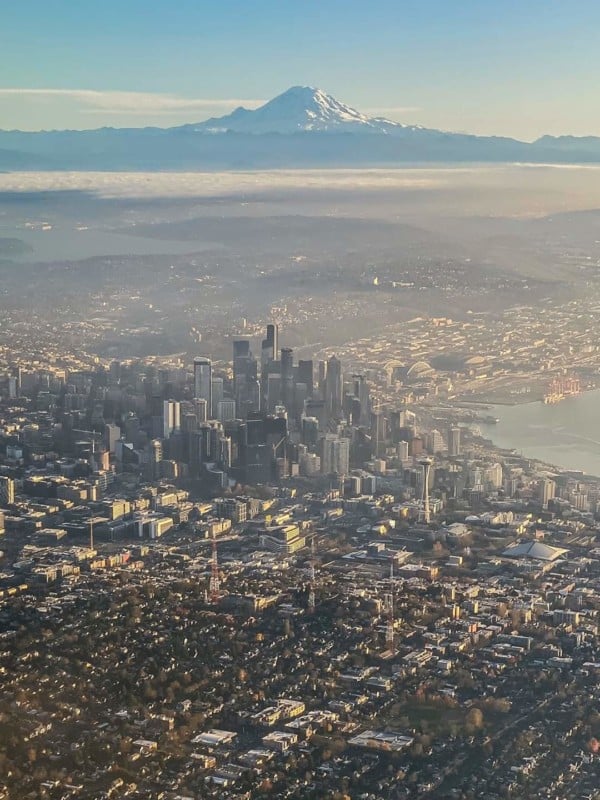 Seattle-based photographer Tim Durkan captured this beautiful aerial photo of Mt. Rainier lined up with the city of Seattle, Washington.

Durkan is Seattle’s Chief Photographer, a position he has held for 16 years. He’s also the brother of Seattle mayor Jenny Durkan.

“I was coming home from a fun trip to Vegas with friends,” Durkan tells PetaPixel. “They had all been seated in first class for helping a passenger with medical issues on the flight down. There weren’t any more upgrades available but I did get my own row in the middle of the plane and facing Mount Rainier on the flight back!

“As we made our final approach into SeaTac Airport, the city lined up perfectly with Mt. Rainier and I got a shot with my new iPhone 11 Pro! I did a quick edit on Adobe Lightroom mobile and posted it before I got off the plane.”

Mount Rainier, an active 14,411-foot volcano, is nearly 60 miles away from Seattle as the crow flies. Seattle is the cloudiest major city in the continental US with an average of 226 days a year of cloudy skies, so Durkan definitely got lucky weather-wise with this photograph.