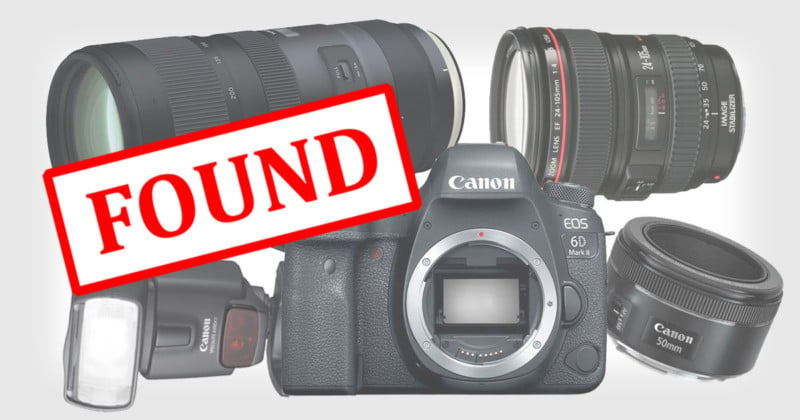 Do you ever wake up in the morning and just know that there’s something amiss? On Saturday, June 22nd, I woke up with a knot in my stomach as I realized I had left my camera outside in my truck. I wasn’t positive I’d locked the doors.

I walked downstairs chanting my mantra “I’m sure it’s fine. I’m sure it’s fine.” I walked outside to find the driver-side door of my truck partially open, the insides tossed around like the overhead bin on a particularly turbulent flight. My heart pounding, I checked the back seat… and sure enough. My whole camera bag had been taken.

I was devastated. And what made it that much worse was the fact that I hadn’t locked my doors. It was my own stupidity that had cost me my baby.

I immediately called the police and filed a report. The officer didn’t seem confident that the gear would turn up. Stolen cameras rarely ever make back to their rightful owners, unfortunately. I also called my insurance company to see about making a claim. It turns out, my deductible was too high to really justify it. I also couldn’t really afford to be out of pocket the amount of the deductible.

So I went back inside and sulked for a while. Poured myself a glass of Bulleit rye and reflected on the stupidity that led to my state of mind. Never again.

During the week that followed, I decided that I couldn’t leave it up to the police to find my camera. I began obsessively checking craigslist, Facebook Marketplace, OfferUp, LetGo and any other online secondhand market I could think of. I set up search alerts on these sets and got an email any time a new listing appeared with the word “canon” or “camera” in the title.

I received dozens of emails, one was even for a 6D Mark II someone had posted to craigslist… but it wasn’t mine. It didn’t occur to me at this time that someone might be stupid enough to try to pawn my gear. Pawn shops generally require a copy of your ID and have video cameras running at all times. So I put off checking any pawn shops for the time being.

After about a week had passed — full of me spotting photography opportunities and then crying when the realization struck — I finally decided to hit up the local pawn shops. Friday afternoon on my lunch hour, I decided to stop first at the nearest pawn shop to my house. Having previously stored all of my serial number information in my Gmail, as well as still owning the boxes to the gear, I was ready to prove my ownership.

So I walked into Cash America pawn. With bars on the window and an entire wall stocked with assault rifles for sale, needless to say, I wasn’t exactly in my element.

I spotted a locked glass case full of cameras, so I took a gander. Mostly old Rebels and a few slightly newer Nikon cameras. Zero full-frame cameras. Zero non-kit lenses. The shop seemed inordinately busy for noon on a weekday. I got in line and waited for about 20 mins. It was finally my turn. I asked the guy at the counter if they’d bought any cameras in the past week.

I had read that pawn shops can’t legally sell anything they buy for 10 days after they buy it. So I told him that my camera had been stolen and I have the serial numbers. So I wrote them down and he went in the back for a few minutes. He came back out and asked if I had filed a police report. I said yes and gave him the police report number, the officer’s name, and his badge number. He disappeared into the back again. This time for about 10 minutes.

Finally the manager came out and told me I needed to have the police come. He didn’t seem happy. I finally got him to tell me that yes, they did, in fact, have my camera in the back, they’d matched up the serial numbers, but I had to have the police come to take custody of it. I called the officer that I filed the report with and he showed up only about ten minutes later. He asked the shop not to sell the gear and had them bring it out so I could confirm it was mine.

I have to say, I never thought I’d see it again, so when he set my bag down on the table and unzipped and all my stuff was in there, my heart was pounding out of my chest. I couldn’t believe I’d found it and that I was going to get it back.

I saw the tag clipped on the bag that read $350. So I asked the guy, “This bag of gear is worth thousands of dollars… did you guys really on pay 350 for it?” The response was just kind of a grunt. That told me two things: 1. They absolutely knew it was stolen 2. The manager was annoyed to miss out on a score that would probably make the shop a couple thousand dollars.

The manager got the ID information of the person who sold it and gave it to the cop. It was a female. I had suspected as much because of the footprint in the mud next to the car door. It was much smaller than mine and my wife would have no reason to walk there. I even took a picture of the footprint with a dollar bill next to it for scale (yes, I watch too much Law and Order and CSI). 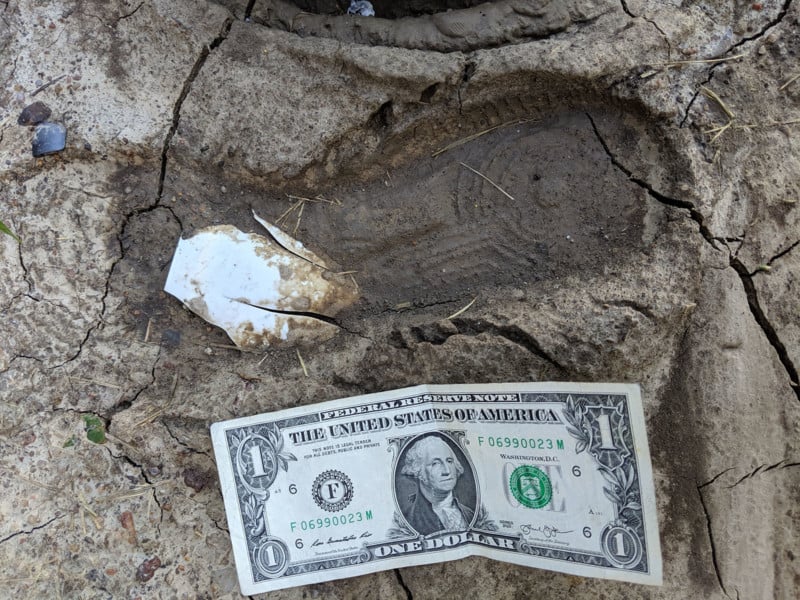 I ended up sending the photo as evidence to the officer and the detective on the case. The cop and I walked outside and he told me that he had to get a detective involved and I should expect to hear from him soon. There was nothing else to be done. The camera would stay at the pawn shop until the detective and I filled out some paperwork and we came to claim it.

He informed me that they had not even made it to processing the report yet and that the pawn shop was required to file the serial numbers for stuff like that, so the location probably would have shown up eventually. But who knows how long that would have taken. There is a pretty good chance that the gear would have been split up and sold by then. As it was, they were only 3 days away from being able to put it out for sale.

The moral of the story? Don’t leave your camera in your car, kids. And if you have to… lock the freaking doors! Moral #2? Don’t wait for the police to find your stuff. Search for it… and you just might find it. See you behind the camera.

About the author: Kyle Boedeker is a photographer based in Missouri. The opinions expressed in this article are solely those of the author.

This Entire Music Video Was Shot in One Take… Backwards