Smartphone lens maker Moment has been branching out more and more. From filters, to camera apps, to fanny packs, the company’s high-quality smartphone lenses have opened the door to a variety of products, and today they’re kicking that door wide open by announcing a line of lenses and filters for drones.

Perhaps the biggest departure from the company’s original smartphone-shooter target market, the announcement comes after years of planning and many requests from Moment users. Unveiled through the brand’s fifth a Kickstarter campaign, there are three so-called “Moment Air” drone products in all: the world’s first anamorphic lens for drones, incredibly thin and light CPL and ND filters for drones, and a special smartphone case designed to fit in your drone controller. The most important and unique of today’s announcements is the Moment Air Anamorphic Lens. According to Moment, it’s the world’s first anamorphic lens for consumer drones, and it promises to give you that ultra-wide aspect ratio and tell-tale horizontal flares without adding a ton of weight to your drone.

It was designed to clip right on to either a DJI Mavic 2 Zoom or Mavic 2 Pro using Moment’s new “Lock and Balance Mounting System,” which features a built-in counterweight to ensure the lens doesn’t throw your drone’s gimbal off-balance.

The lens will be available in two sizes (for each of the two drones mentioned above) and it can be purchased alongside new anamorphic ND filters that fit right onto the lens itself. Both versions of the lens will retail for $300, but you can snag one for $200 through the Kickstarter campaign. 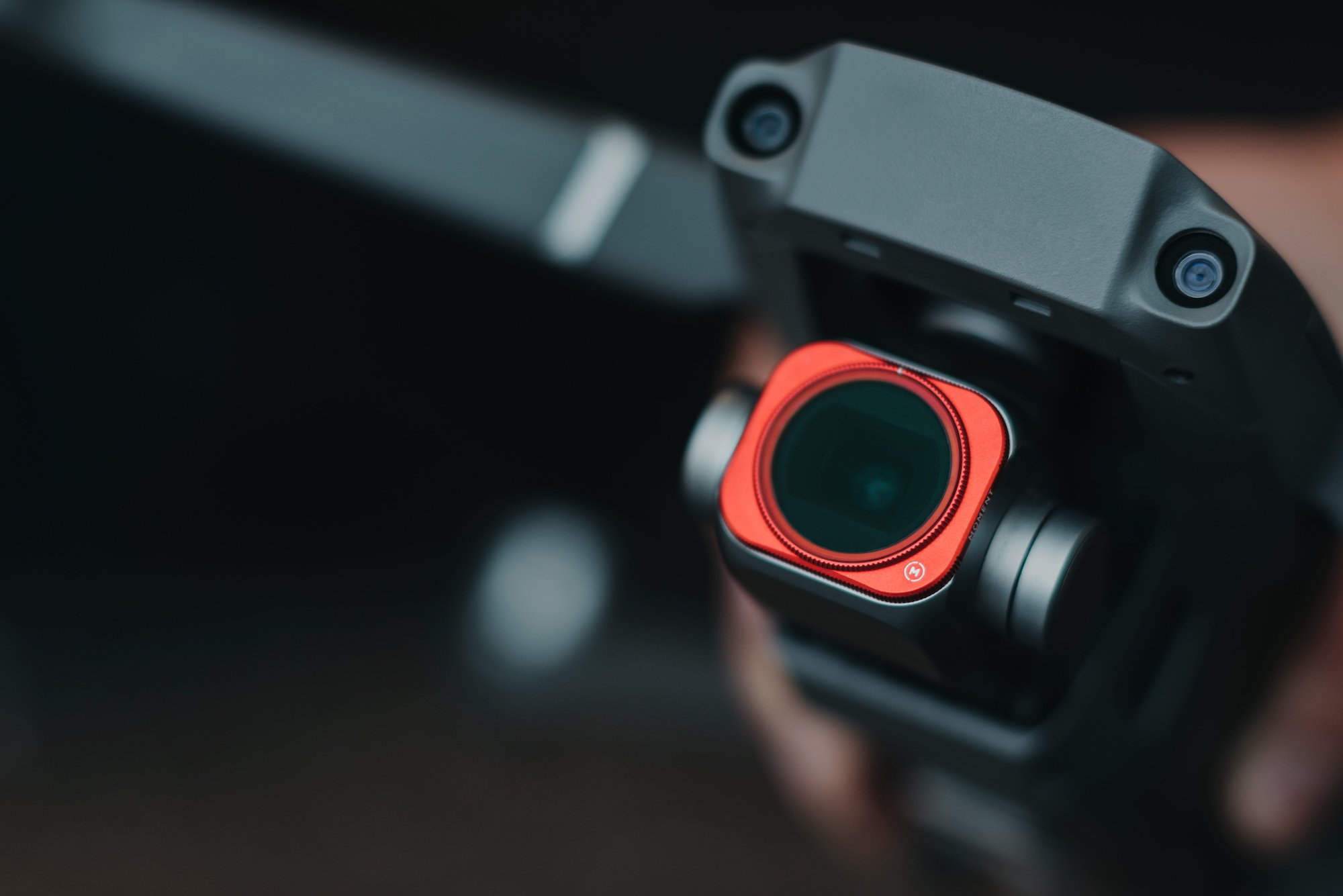 Accompanying the anamorphic lens is a set of ultra-light CPL and ND filters designed, again, for the DJI Mavic 2 Pro and Mavic 2 Zoom drones. Made from aerospace-grade materials, the filters were designed to be as light possible without interfering with image quality.

If they make it to market, they’ll be the the lightest drone filters available.

The filters both use multiple optical coatings and are made from cinema glass, so the optical quality should hold up. To find out more or order yours for the special discounted price of $100 (they’ll retail for $120) head over to the Kickstarter page. Finally, the least exciting release of the day is Moment’s new Ultra Thin Photo Case, which allows you to use the company’s smartphone lenses but still fits inside the DJI Mavic’s drone controller.

This case is compatible with the iPhone Xr, Xs, and Xs Max, is just 0.75mm thick, and adds only 12 grams of weigh to your phone. No idea how much actual protection the case will offer, but Moment users looking for convenience and portability above all else probably won’t mind.

The case will cost you an additional $25 bucks if you order it through Kickstarter, or $30 if you wait until it’s available for retail. 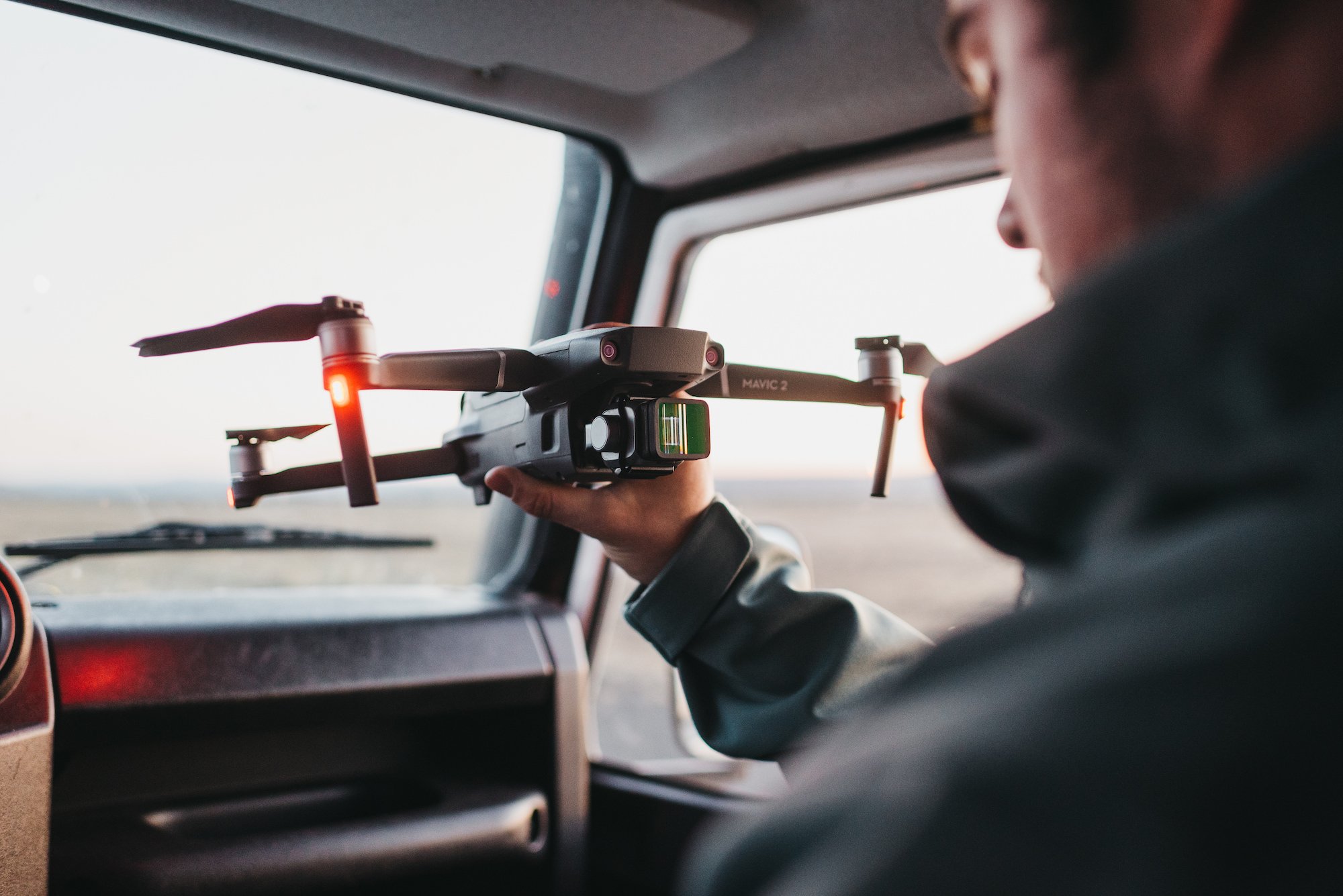 When Moment reached out about this announcement, we took the opportunity to ask: why is moment getting into drone accessories, and what exactly makes the filters in particular stand out, since there are already some popular options out there?

Why drones was pretty easy to answer. “With our anamorphic we got a lot of requests for large market camera (an affordable anamorphic) and drones,” Moment tells PetaPixel. “Even our own team wanted to see if we could get it to work on a drone because if you want that look it’s actually really expensive.”

The rest, apparently, followed from the pursuit of making that “world’s first” anamorphic lens for drones. “In making this product we also realized a lot of things in shooting with a drone were clunky so we decided to fix those too,” they told us. “The filters weren’t very good. Every phone case was too thick for the controller and you have to take your case off every time.”

Moment’s offerings are, at least according to the spokesperson we spoke with, made from the highest quality materials, are about 10% lighter than the other options on the market, and they take advantage of dual-sided lens coatings so the colors out of the filters should be better than what you’ll see from the competition. Plus they’re red, so “they look really good on the front of the drone.” You know what… we’ll take it.

As with any Kickstarter, there’s a certain amount of risk involved in backing an unreleased product, but major brands like Moment don’t often default on their crowdfunding promises, so it’s probably a safe bet. To learn more about any of these products or back one or more of them yourself, head over to Kickstarter and take advantage of those early bird discounts while you still can.