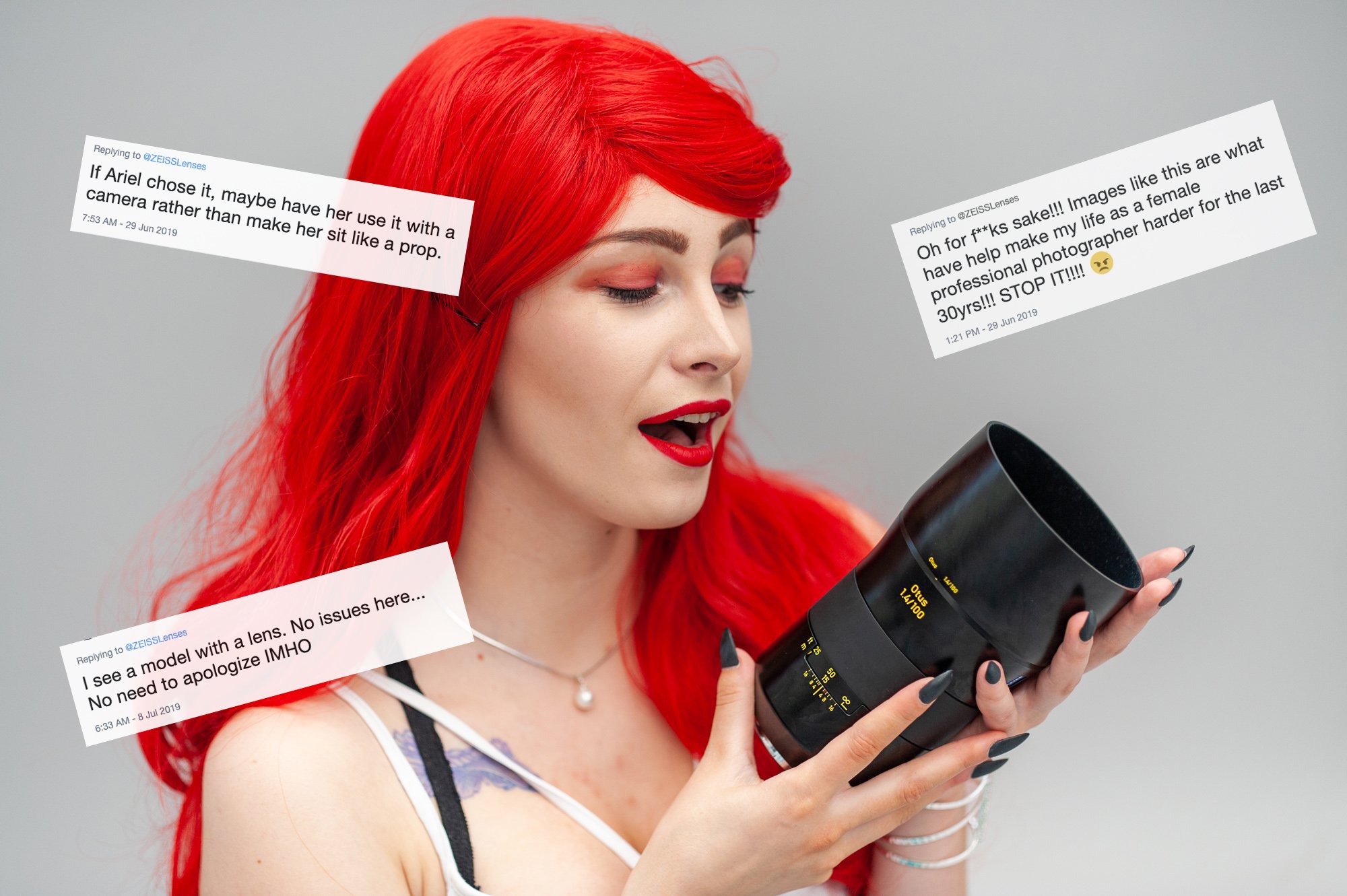 ZEISS has issued an apology after a promotional photoshoot featuring its latest Otus lens struck a negative chord with a large number of the brand’s followers on Twitter, who accused the brand of being sexist.

The offending photoshoot from Animefest 2019 featured model Katka Kavanova dressed up as Ariel from the classic Disney film The Little Mermaid holding the new ZEISS Otus 100mm f/1.4. Two end-result images and one behind the scenes shot were posted to the brand’s Twitter account alongside the caption “Recently, the visitors of #animefest2019 in Brno (Czech) had the chance to test our #ZEISS lenses. Ariel didn’t hesitate and chose our new #ZEISSOtus 1.4/100!”

But while ZEISS may have thought the post was harmless, many users on social media saw it yet another instance of a camera company using a woman as a prop to sell gear to a majority male audience. Some commenters pointed out that Ariel didn’t even have the lens attached to a camera:

Reword the caption please thanks. Ariel would never “choose a lens” just to hold it and not mount it on a camera.

I think you can do better than this, if testing means holding it like a baby, sure it’s a success…doh

If Ariel chose it, maybe have her use it with a camera rather than make her sit like a prop.

While others responded more bluntly, explaining that these kinds of images actively make life more difficult for female photographers:

I’m as heartened by these responses as I am disgusted by @ZEISSLenses choice of misogynistic and outdated imagery for their ad campaigns. You guys make good glass, surely you can do better than this?

Oh for f**ks sake!!! Images like this are what have help make my life as a female professional photographer harder for the last 30yrs!!! STOP IT!!!! 😠

Why not stop USING women? Why can’t there be a balance of sexes in both models and photographers?

Lastly, some in the photo community were confused, not by the post, but by the response. A few users came to ZEISS’ defense, wondering aloud what exactly everyone was getting so upset about:

I see a model with a lens. No issues here… No need to apologize IMHO

LOL at all these upset folks 😂 it’s just a cosplay from an ANIMEFEST! OMG “you people” are probably Canon users LMAO Great job #Zeiss I’ll be picking up a Batís soon 👍🏽💯📸

① Get up in the morning.
② Be offended.

What a sad life.

Ultimately, ZEISS felt that the backlash warranted a public apology. The brand posted the apology in reply to the original tweet, writing, “Dear Community, We apologize for any offense caused by this post as part of an anime event. We have listened to your feedback and take your comments very seriously. Thank you for your engagement on such an important topic.”

Dear Community,
We apologize for any offense caused by this post as part of an anime event. We have listened to your feedback and take your comments very seriously. Thank you for your engagement on such an important topic.

Of course, the apology itself has since sparked a variety of responses ranging from annoyance that ZEISS apologized in the first place, to gratitude that the brand was willing to back-pedal and acknowledge that the post was in poor taste.

What do you think? Did ZEISS cross a line and fall victim to tired tropes and stereotypes that do real damage to the photography community? Or do you feel that the social media backlash was unwarranted? Let us know in the comments.

Why Ego is Crucial for Photographers, and How it Can Get in Our Way