Weather-sealing in modern camera lenses is great at keeping things like water, sand, and dust from getting inside the (often pricey) gear. But it seems that it may be no match for flies.


The camera gear rental company Lens Rentals shared today that it recently received back a $2,100 Canon 70-200mm f/2.8L IS II from a rental customer and was surprised to find a “fairly large sized fly” inside the “weathersealed” lens. 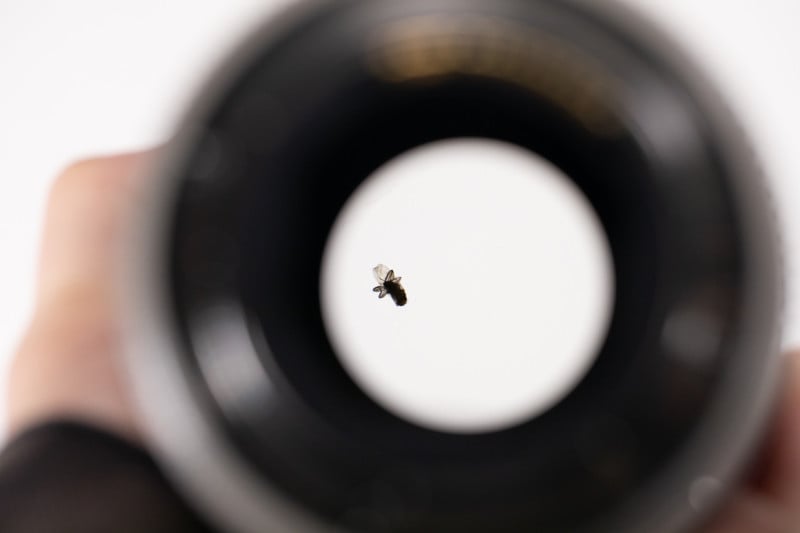 Before removing the fly, Lens Rentals founder Roger Cicala first decided to use it for demonstration purposes. For any of you who are constantly worried about dust on or just inside your lens, get this: having a fat fly inside your lens will likely have zero perceptible effect on the lens’ image quality.

Cicala shot photos of lens test charts and even ran a complete set of MTF tests to calculate the lens’ sharpness. There was no sign of the fly at all focal lengths until the lens was stopped down. Only at apertures f/13 and f/22 did Cicala start seeing the shadow of the fly show up in photos.

“Stopped down to f/22, zoomed back to 70mm, and focused at minimum focusing distance, we could get a pretty sharp, black blob,” Cicala writes. “Just so nobody claims ‘see, that’s why you don’t want dust in your lens’, I’ll add there’s lots of dust and a couple of detached fly legs lying around and you don’t see any sign of them.”

The takeaway from this test? “If your dust speck is smaller than a fly (about 4mm by 1.5mm) it’s not showing up in your images,” Cicala says. “I think this does serve as a good demonstration of how little effect even a very large object inside the lens has. It would have a more dramatic effect, probably, if it had been located closer to the rear element.”

Getting a fly (or anything, for that matter) out of the middle of a lens is NOT easy. It took a Lens Rentals repair technician with “a lot of expensive equipment” nearly 4 hours to disassemble (1 hour), clean (0.75 hours), reassemble (1 hour), and readjust/test (1 hour) the lens just to remove the fly. So if you get quoted hundreds of dollars “just” to remove some dust from the inner parts of an expensive telephoto lens, this is why. Cicala estimates that this particular job would cost $369 total for labor ($169) and equipment/overhead ($200).

Finally, how did this large fly get into the sealed lens in the first place?

“All of the lens seals were intact and the lens had a filter on from day 1,” Cicala writes. “We couldn’t find the tiniest possible entry point around the barrel or front element.”

He suspects that the fly somehow entered through the rear of the lens while it was still a maggot (or perhaps even earlier in its life cycle).

“We think getting in from the rear is most likely,” Cicala writes. “There is a small crack where the rear baffle (the very first photo) seats around the rear element. With the cap on or mounted to the camera, this area wouldn’t be accessible, but caps aren’t always on or perhaps get put on with something inside them.

“My own thought is perhaps our fly got in at the maggot stage and hatched inside. The gaps we saw around the rear baffle look too small for a full-grown fly to get in. But that’s just a guess. I am not knowledgeable in the ways of flies.”

But even if the fly entered as an egg or maggot, what did it eat to grow into the large adult fly that was found?

Image credits: Photographs by Lens Rentals and used with permission