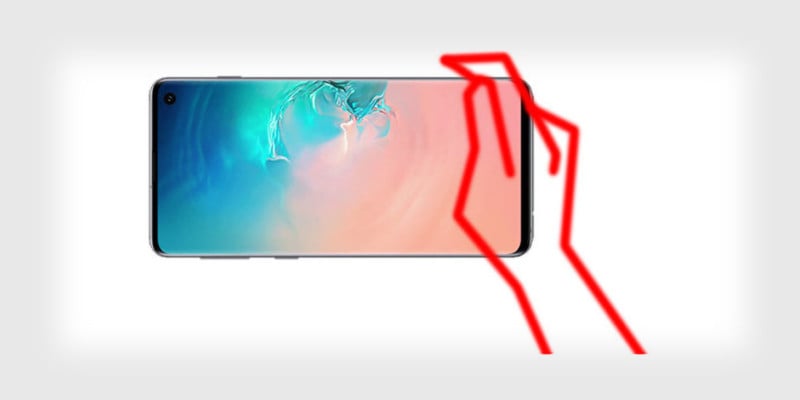 Once upon a time, the biggest problem with camera phones was the camera itself. One of the world’s first camera phones, the J-SH04, was released in 2000. Boy have we come a long way, right? It could shoot tiny 0.11-megapixels images. It went up from there. 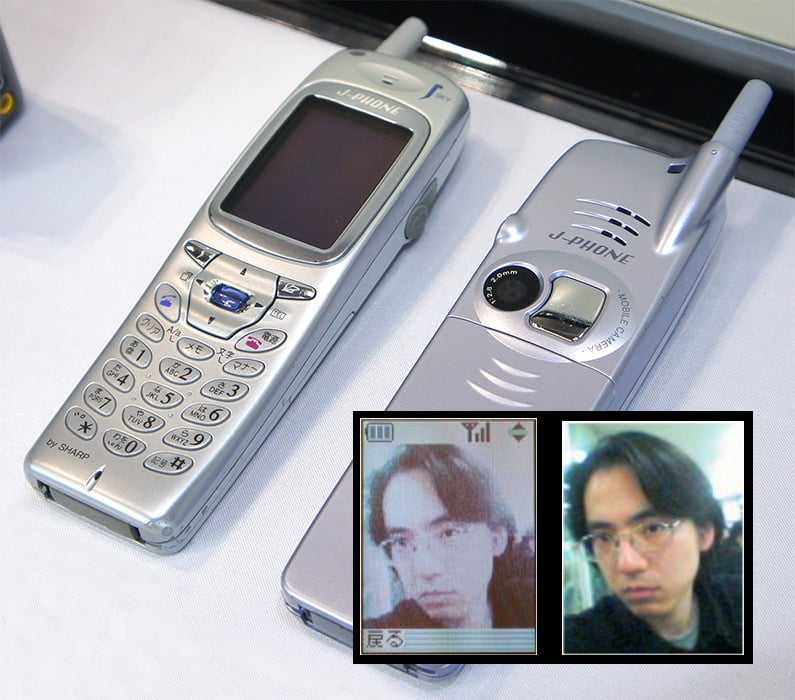 The camera is a big deal in any phone nowadays, Apple has its “Shot on iPhone” campaign and bunch of other brands do the same, some even partnering up with Leica to give their phone a legs up above the competition.

Speaking of partnerships, I was recently looking at the reveal of the Nokia 9 PureView, which has Zeiss backing it up. Look at that beast: Oh mama, that thing has 5 cameras. Yeah, you heard that right — 5 cameras! It can capture an amazing amount of detail, has RAW shooting, a monochrome mode (this thing has 3 monochrome cameras), crazy low light capability, killer dynamic range. While watching the presentation, I started to want a bit. What photographer doesn’t want the bestest image quality they can get, right?

Well, I slapped myself right there and remembered my dashed hopes and dreams with camera phones. This brings me to…

My Quest for the Best Camera Phone

I’m probably not alone, I just want one device. It can take calls and browse the web, and also be a great camera that would allow me to leave my pocket one at home. I had one of the first ones really pushing the camera: the Sony Satio. Afterward, I had the sleek but ultimately garbage Samsung Galaxy Zoom, then I went to the looks-like-a-camera Panasonic CM1, and now I’ve settled on an old LG G5 with camera grip. Even better, camera phones have two advantages for street photographers: one is the phone itself because you can totally fake you are using your phone and get some pretty stealthy shots with it. And the second is, incredible fps. Many modern phones offer increased fps — my old G5 has 30 fps! Just keep the shutter release pressed, and voilà!

But while camera phones make awesome images, here’s the issue…

The Problem with Camera Phones

Here’s the problem with camera phones. They have camera power but they don’t have camera handling. Phones have had “good enough” image quality for years, but there has not been one camera phone I have ever trusted in my life. Every single camera phone out there is a phone first. They handle like phones but then some whizbang camera has been attached afterward. What that means is that you are stuck shooting with your hands like this: 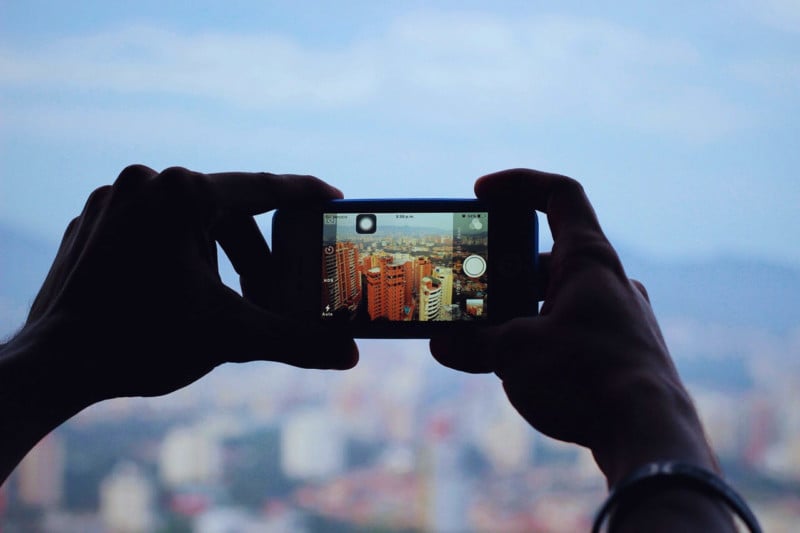 This is less than ideal and very limiting to photographers. Especially for street photographers, because most phones will not allow for one-handed shooting. Right after fancying the new Nokia 9 PureView, I reminded myself that no matter the fancy new camera tech, it would handle like the dozens of phones I had and the lusting stopped right then.

The one camera I believed would be the end-all of all camera phones was the Panasonic CM1. It looks very camera-ish and definitely has the camera power. The handling, however, is a different situation. I had to put a grip on it to make it feel more camera-like but the handling is again, phone-like. Phone manufacturers put too much emphasis on image quality and very little thought on handling.

It doesn’t matter how good your camera is if you can’t get the images you want. Take the LG G5 I currently have, I told myself the handling wasn’t that great (even with the camera grip) but the fact that I could shoot 30fps means that I could just get 3-5 seconds worth of images and I would surely get the shot. That is not the case, because I have never been able to frame correctly, even winging it with the 30 fps.

There’s nothing more frustrating than seeing a shot and pulling your phone, knowing that the angle you actually want you probably won’t get because you can’t hold the phone well enough. Add to that the fact that you can never change settings easily — it’s either in the menus or you have to touch the screen to change them — and you are probably going to miss those in-the-moment shots.

Granted, for landscape shooters or any other photographers who don’t need to shoot at angles or quickly, this does not apply. But for street photography, I’ve only been frustrated with camera phones for the last 10 years. The handling is never there. The ease of changing settings is never there. Even the Panasonic CM1, that has a dial on the front is not enough. At minimum, a serious camera needs 2 dials to change settings, if you have to go press buttons to change the settings from shutter speed to ISO, that’s not going to work when you need things fast.

It’s ironic because the camera phone is the first device in history in which you have all of the photographic process, from capture to publishing, right in your pocket. To be honest, I’ve given up on camera phones, I just have my phone and my pocket camera with me. It’s just weird that I prefer an 8-year-old camera with barely a few frames per second and which has worse IQ than my phone that can take 30 fps shots.

And again it all comes down to handling. It’s the one thing phones are missing. And it’s probably never going to happen. Because camera needs are different than phone needs. The best camera phone would probably be like a camera with a touchscreen in the back. But what about the camera dials and buttons? As a phone user, you probably wouldn’t want anything messing with your screen. As a camera user, you want those buttons. But when you hold your phone, you don’t want to be pressing random buttons. Here’s what I mean:

Take your pocket camera and hold it in front of you. Notice anything? Yep, the back area has been designed to accommodate your thumb and lower thumb area. All of this has been designed so that you have a nice grip to have your index finger press the shutter release button. Look at this lady here: 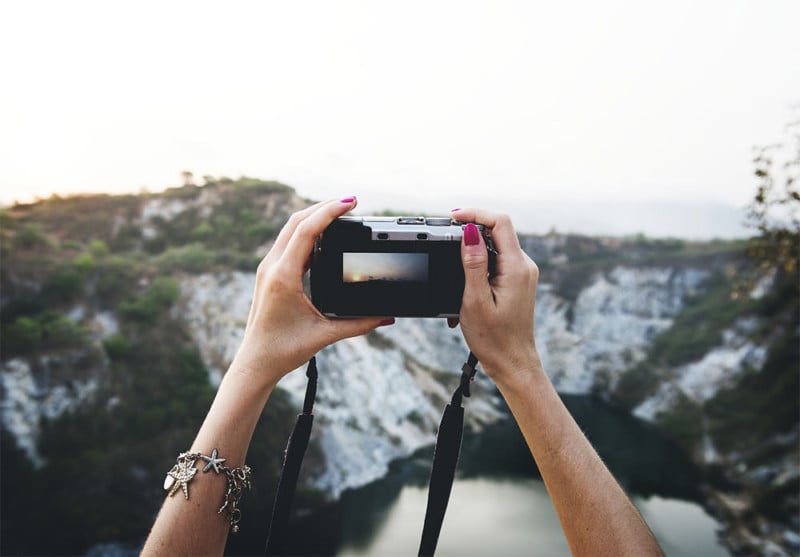 Now imagine there are no creases, this area is just screen real estate, this immediately kills handling. And while you might WANT this area while shooting. It’s also a phone. How would you like to be stuck with a phone like the bottom right one: This also brings another point: bulk. Cameras are bulky and what’s great with bulk is handling. You can hold it better. Phones stopped being bulky a long time ago. So when you want to hold your slab of a phone with one hand it feels weird as your fingers try to get a grip on the back of the phone and not let it slip.

Is There a Solution?

The good news is, there is a solution to this conundrum between phone and camera. A modular phone. The phone can be removed to be it’s own slab, or you can put it into a camera module to get a nice grip with buttons. Something like what Pictar wanted to do: You can see how the guy is handling the phone, and observe the thumb rest area. Something like that, but with normal camera buttons in the back. But the way things are going with modular phones, where nothing ever pans out, this is more of a pipe dream than anything.

I love camera phones, and they only get even more awesome every day. However, it doesn’t matter how great they are if you can’t trust them to get the shot. The main problem I have found over 10 years comes down to handling. And while this problem looks easy to solve on the surface, if you just add camera handling to a phone, it would probably suck as a phone. Let’s hope brands like Nokia or Samsung will finally make a phone that makes photographers want to leave their dedicated compacts at home. Until then, my trusty Ricoh GRD IV is always by my side.

About the author: Olivier Duong is a Haitian-French-Vietnamese street photographer. The opinions expressed in this article are solely those of the author. Duong is the editor in chief of Inspired Eye Street Photography Magazine, which you can subscribe to here. He also teaches a photography method based on the eye, heart and the mind. You can also connect with him through Twitter. This article was also published here.