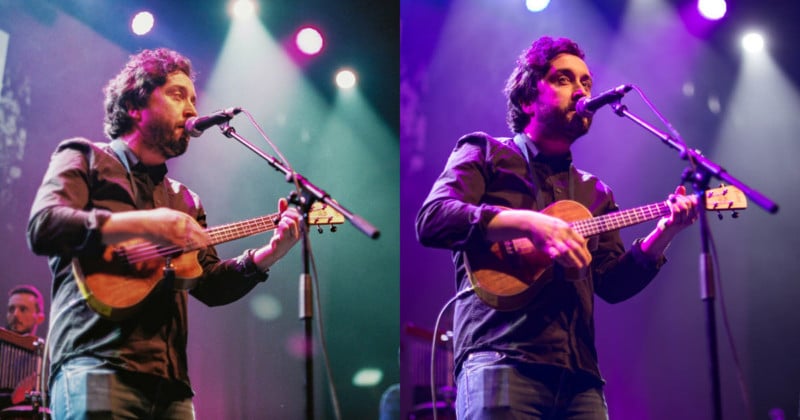 Film is very rarely used in music photography anymore. The reason for this is primarily because of social media and instant news. There’s no time to go home and start pouring chemicals onto film to develop it or wait until the morning until a lab opens to do it for you.

For festivals or stadium gigs, we would bring our laptop with us and start sending out photos minutes after the artist stepped on stage. This is what people expect with modern technology.

Secondly, film can be difficult to work with, especially for music photography. Venues are generally very dark, and high sensitivity color film is difficult to find and is expensive.

When there are lights, they tend to strobe making it even more difficult to get the exposure right. On top of that, if you have a good film camera, it was probably built in the 1970s. The auto-exposure technology wasn’t great back then and it may not have aged well.

However, film still has a charming quality to it and shouldn’t be put in the obsolete bin with the Walkman and DVD player just yet. A few years ago I compared film vs digital cameras for music photography. Since then, I’ve managed to track down two identical rare film lenses from around 1973.

On one of the lenses, I removed the old Canon FD mount and replaced it with a modern Canon EF mount so that it can fit on my Canon digital camera. I used ISO 400 film and set my digital camera to ISO 400. So this is a direct comparison between a chemical film sensor and a modern digital sensor.

Music photography is the toughest environment to compare film vs digital. The dark venues, fast-moving artists, massive contrast by artificial stage lights, even the eye-wateringly expensive modern cameras can struggle in such surrounds.

Technical details: I used Fujifilm Superia X-tra ISO 400 36 shots film on a Canon A-1 with a Canon 55mm f/1.2 SSC. Everything was shot at f/1.2, and the shutter speed was set by the camera’s auto exposure. The film was developed and scanned in Gunn’s Camera shop.

Below are a selection of photos comparing film and digital images (film on the left, digital on the right): 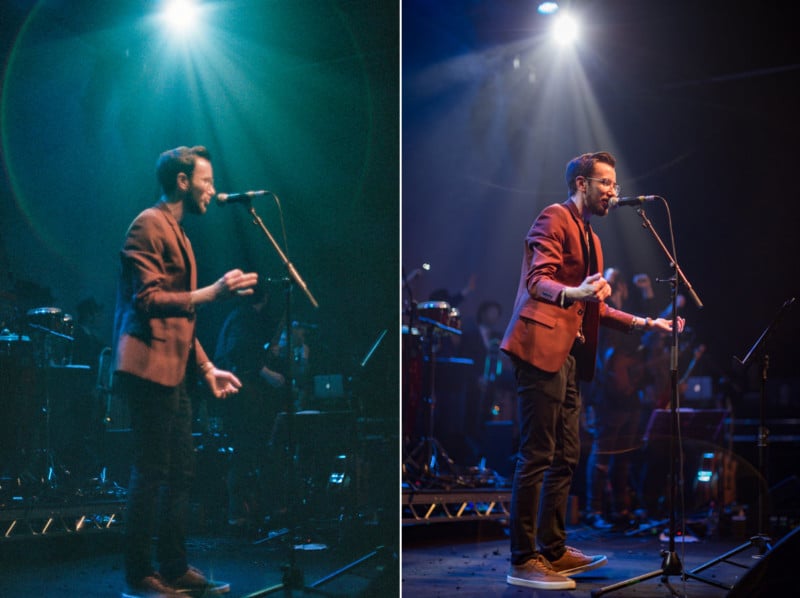 What I’ve found by using both mediums is that with film you are forced to slow down, make sure the composition is right, watch the artist, and predict how they are going to move next, because I know I only have 36 shots on my roll and I don’t want to waste any of them. With digital it’s the complete opposite.

Modern cameras don’t have the split prism focusing screen that helps you nail focus like the old film cameras (I bought a split prism for my digital camera but it turned out to be useless). With the tiny depth-of-field of the f/1.2 lens, focusing becomes a game of trial and error in which I ended up with 20 times as many photos.

About the author: Owen Humphreys is a professional music and event photographer based in Dublin. The opinions expressed in this article are solely those of the author. Humphreys has been featured in Goldenpec, The Irish Times, Stereogum, Hotpress, among many other publications. You can find more of his work on his website, Facebook, Twitter, and Instagram. This article was also published at Goldenpec.

How the Iconic Photo ‘Migrant Mother’ Came to Be

Bowens is Back from the Dead with the XMT500 Flash Head