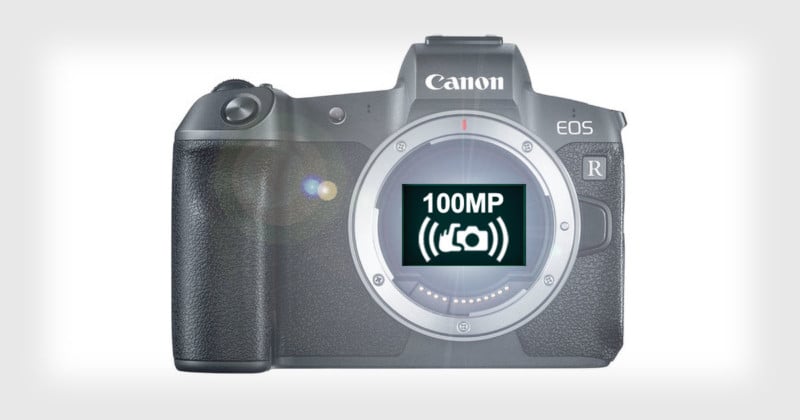 Canon’s $2,299 30MP EOS R was its first full-frame mirrorless camera, but it has long been reported that it’s a middle-tier camera and that entry-level and pro-grade models are on the way. Rumors are now heating up that Canon has a 100-megapixel EOS R camera in the works — one that packs in-body image stabilization.

Canon was previously rumored to be planning both IBIS and a high-megapixel sensor for its new mirrorless line, and it seems both of those things may appear in a mirrorless camera geared toward professionals who need the ultimate in resolution.

Canon Rumors and Northlight Images are both hearing from sources that a high-megapixel IBIS camera are in Canon’s pipeline.

Northlight notes that Canon apparently stopped any kind of development of a medium-format digital camera system several years ago, and now the company may be content with packing an ultra-high pixel count — one that “breaks the 100MP barrier” — into a 35mm full-frame sensor instead.

“It’s highly possible,” Canon Rumors confirms. “We’ve been told that Canon scrapped the development of an EOS 5DS/R follow-up and that their next high megapixel camera will be for the EOS R system.”

Still, Canon Rumors doesn’t believe the camera will show up until 2020 after the company first unveils some native RF lenses that can handle the 100MP+ resolution for landscape and studio photographers.

It’s unclear whether this rumored 100MP+ camera will also be capable of shooting 8K video, which Canon has already confirmed to be on its roadmap.

And it looks like Canon will finally embrace in-body image stabilization after decades of sticking with in-lens stabilization.

“We were told previously that the IBIS system simply wasn’t ready for the EOS R release, though there were prototypes with IBIS floating around during testing,” Canon Rumors states. “It’s safe to say that Canon will embrace IBIS in an upcoming release.”

After years of Sony’s near-monopoly of full-frame mirrorless cameras, things are now getting exciting.

Backpacking the World with a 500mm Prime Lens