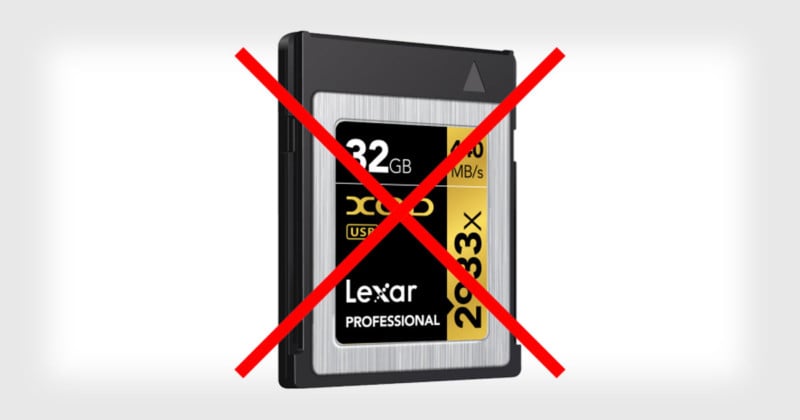 Lexar has abandoned the XQD memory card format and is now focusing its attention on pushing for CFexpress as the future standard.


After the Lexar memory card business was shut down by Micron in June 2017 then acquired by the Chinese company Longsys in September 2017, Lexar stated that it would continue producing XQD memory cards.

The Polish Lexar distributor My Adventure published a press release on Monday stating that Lexar has pulled out of the XQD market. Longsys purportedly concluded that given Sony’s monopoly over XQD licensing and the relatively small number of cameras that support the card, “further investment and development of this technology makes no sense.”

Lexar says Sony and other companies were responsible for preventing progress.

“While Lexar is eager to pursue the XQD technology, the product availability of XQD has been held up by multiple parties including Sony (who owns the IP) which is preventing us from moving forward,” the company tells Nikon Rumors. “In addition, we are diligently working on the future standard of CFexpress through our efforts in the Compact Flash Association and partnerships with key camera manufacturers.”

XQD was announced back in 2010 by SanDisk, Sony, and Nikon. CFexpress was announced by the CompactFlash Association in September 2016 as a direct successor to XQD — XQD-compatible cameras can be upgraded to support CFexpress with a firmware update.

While XQD cards have top theoretical speeds of 1000 MB/s, CFexpress could reach ridiculous speeds of 7880 MB/s, or nearly 8 gigabytes of data per second.

With this latest move, Lexar joins the young ProGrade Digital in rejecting the XQD format and pushing for a future of CFexpress dominance.

Equipment, Industry, News
cfexpress, format, industry, lexar, memorycard, standard, xqd
Related Articles
Discussion
Trending Articles
Blood Moon, Aurora, and Milky Way Captured in One Photo
May 19, 2022
Wedding Photographer Tells Couple to Act Drunk, Gets Amazing Portraits
May 20, 2022
The Science Behind Why Watches are Set to 10:10 in Advertising Photos
May 17, 2022
You Are Still a Photographer, Even If No One Likes Your Images
May 21, 2022
Photographer Builds Giant Camera and Darkroom Bus
11 hours ago