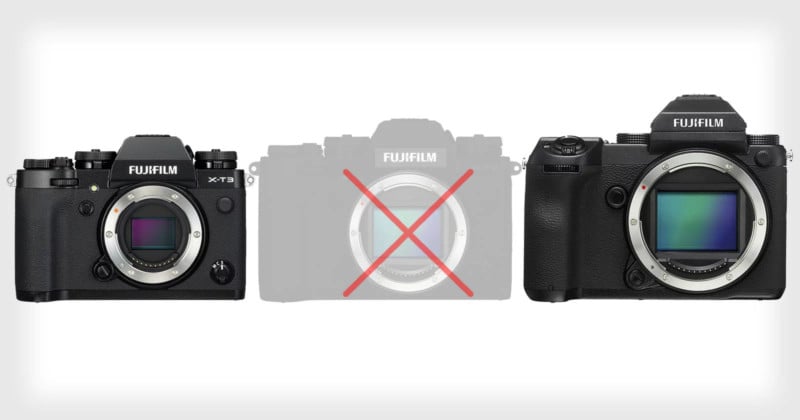 If you’ve been hoping and praying that Fujifilm will launch a full-frame mirrorless camera, get ready to have your dreams dashed: the company is now saying that it will “never go full-frame.”

Fujifilm has been focusing all of its attention on APS-C and medium format cameras in recent years. The new Fujifilm X-T3 is a major contender among APS-C cameras — DPReview just concluded that it’s “arguably the best stills/video camera on the market right now.”

As the company continues to unleash top-quality cameras for medium format and crop sensor, many have understandably wondered whether Fujifilm will fill in the glaring gap by introducing a new full-frame camera to compete against the likes of the Sony a7R III, Canon EOS R, and Nikon Z7.

The answer is no.

In an interview with DPReview at Photokina in Cologne, Germany, Fujifilm imaging general manager Toshihisa Iida was asked directly whether Fujifilm will ever enter the full-frame market.

“No, never,” Iida replied. “Because we don’t have that legacy – luckily or unluckily. We don’t see any point in Fujifilm entering that market, particularly since we have good APS-C and medium format systems.

“If we entered full-frame [our systems] would just start cannibalizing each other. We’re happy to stay with two completely independent systems.”

Iida also says he hopes that more and more photographers step up from the APS-C X Series to the medium format GFX series “in the near future.”

How to Overpower the Sun to Shoot Stunning Outdoor Portraits