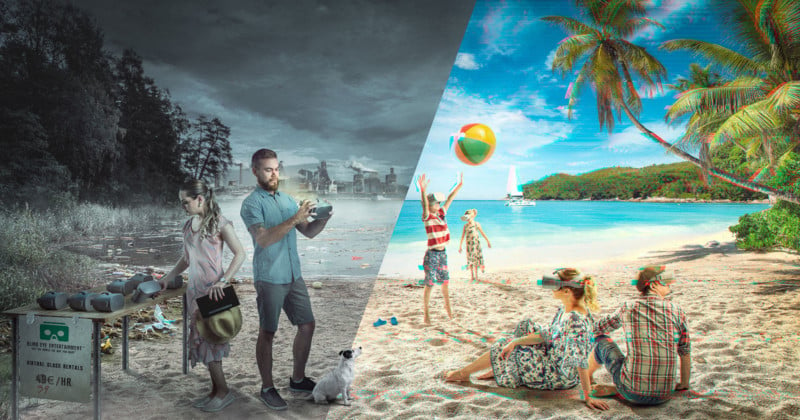 I’m not an environmental activist. I’m more or less a regular dude who hates taking out biowaste, still drives a diesel because it’s cheaper, and recycles plastic because my wife tells me to. I enjoy our Finnish lake views, clean air, and peaceful sunsets, but rarely thought about losing them… until recently.

I was on one of my workshop trips, this time heading to Belgium to have a couple of workshops with Chromaluxe. I was browsing through the Finnair magazine and came across an article about the plastic pollution in the ocean and how people try to clean the garbage we just throw there.

Maybe the idea had already been brewing in my head before this, but now I had an image flash in my mind: a dystopia located in our not-so-distant future. I pulled my faithful Moleskine notebook out of my bag and started sketching an image split in two halves: a polluted beach with a couple fitting on virtual glasses and an “Alternate reality” where people see their fantasy world through VR, turning a blind eye to all the s**t we have caused to our environment.

It took a couple of months before I finally realized this idea wouldn’t leave me alone until I created it. The final push for the idea was seeing the movie Ready Player One and its cool visions of people immersing themselves in virtual reality.

To make it even more personal, I took a walk to a nearby lake to take some shots of “our” beach and asked my wife and kids to help portray the family in the picture. My trusted stylist Laura and her fiance played the part of the couple about to by VR glasses. I filled in some missing pieces such as the tropical scenery (we don’t have palms and turquoise water here in Finland) using Adobe Stock images.

Having a strong vision about an image can ruin your nights by keeping you awake, but it does make it easier to plan and execute the photo shoot. I shot every character in the image individually doing various poses and then decided in post-production which poses were best for the dynamics of the group.

The rest of the work was just tedious retouching until I felt that the mood correctly portrayed the idea of a reality in which a clean beach can only be enjoyed by renting a pair of virtual glasses.

So here you have it: “Turn The Blind Eye”. I finally turned the image from an idea that flashed into my head into its final form on a screen for others to see. It won’t save the world from drowning, but maybe images like this can be a wake-up call for somebody to do something about it. I, for one, know that I’ll be more enthusiastic about recycling my plastics and enjoying beautiful, real lake views while we still can.

About the author: Antti Karppinen is a photographer, digital artist, and retoucher based in Finland. He is an internationally award-winning commercial and portrait photographer. You can find more of his work over on his website and blog. This article was also published here.

How to Photograph the Back of the Hollywood Sign