This is the story of how a single photograph and an irreverent NFT community became the international emblems of the United Nations global plastic treaty.

Turn Off The Plastic Tap

My name is Benjamin Von Wong, and I am an artist and activist that has been fighting against single-use plastics for the last six years. In October 2021, I launched a series of photographs around the hashtag #TurnOffThePlasticTap. It featured a giant faucet pouring plastics into different environments. We gave out over $10,000 of prizes, and brought on a dozen non-profits to promote it – but unfortunately, the launch didn’t go as planned because Facebook, Instagram, and Whatsapp all experienced a major outage that same day.

Frustrated, I started working on a plan B: To recreate the art installation in Nairobi, Kenya where 1,500 delegates from 193 different countries were going to come together for an event called #UNEA5 to vote on a global resolution to tackle plastics.

Unfortunately for me, funding was a problem — and despite interest from a couple of wealthy individuals and philanthropists, we weren’t getting enough support to bring this project to life.

Thankfully, someone heard about my struggles from an unlikely place and offered to help: The Degenerate Trash Pandas — an online Web 3.0 community dedicated to collecting NFTs on the eco-friendly proof of stake blockchain, Solana.

One of those panda collectors happened to be an anonymous plastics expert and activist leader known as Solly. 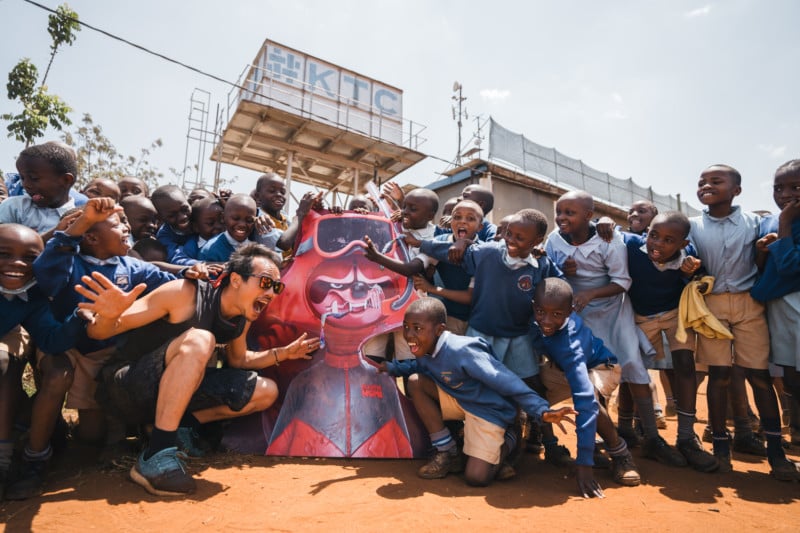 Solly The Ice Ape is an eco-activist and Degen NFT collector. For the last couple of months, he had been trying to find ways to connect NFTs to real-world environmental impact opportunities.

When he learned about my mission, he instantly saw the potential and reached out to the lead developers at the Degenerate Trash Pandas (Pit and Viper) to see what they thought of bringing a giant faucet spewing trash all over the United Nations Headquarters.

They loved the idea. So much so, that they offered to provide seed funding directly out of their own pockets to pay for the installation.

Now, all that was left was to find a way to turn the idea into reality. Finding a local partner for large-scale projects like these is always key. Not only do we want to ensure that we’re providing local jobs and opportunities directly to the community, but we also needed to find a group that had the technical expertise to manage the project.

That’s where The Human Needs Project comes in.

They’re a 501c3 that serves the community of Kibera, the largest slum in Africa that houses over 1.2 million people in an area the size of central park. As an organization, they provide services directly to the community like clean water, sanitation services, and educational opportunities. They had been looking for a way to create more sustainable waste management systems, and this could be the opportunity to create a win-win situation.

What if they could help us build this art installation, and in exchange, we could run a fundraising campaign for them to get a circular waste-management program off the ground? 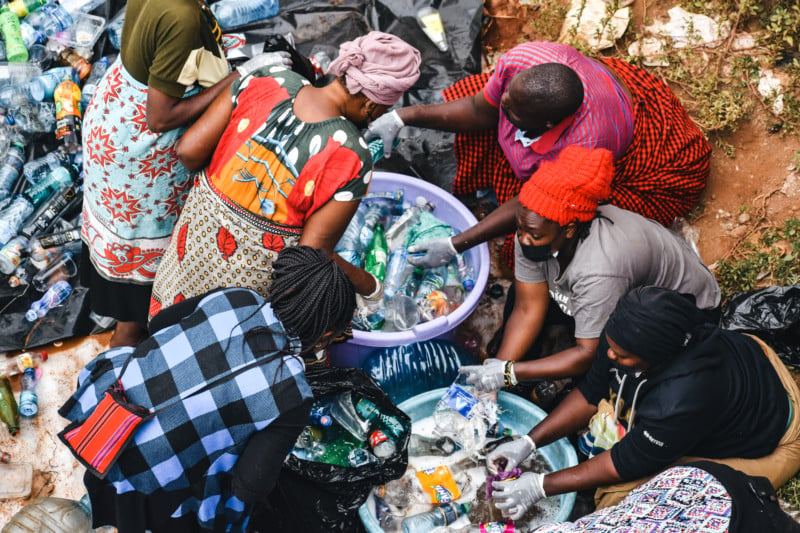 To make this fundraiser compelling, we needed a hook.

What better hook than a raffle, where the winners would get their PFPs printed life-size and brought directly into the United Nations for a once-in-a-lifetime photo opp? It would be an amazing story of the metaverse intersecting with real word activism.

Before we knew it, we launched a website called PandasNotPlastic and were off to the races to raise 1000 $SOL (approx $100,000) to help create 1,000 permanent jobs through the Human Needs Project. 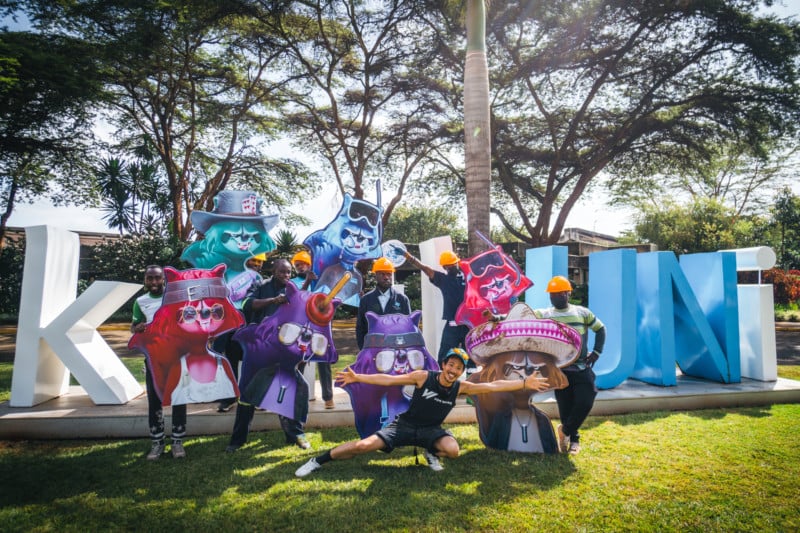 In parallel, we still had an installation to build.

With the funds provided to us by the Degenerate Trash Pandas, we hired over 60 women from the community of Kibera – mothers, widows, and ladies that were negatively impacted by the pandemic to clean and tie three tons of used plastics altogether.

Along the way, we commissioned the crew of the Human Needs Project to design and build a faucet that would be supported by 30 feet of steel, anchored in place with four concrete blocks.

Before we knew it, ten days had passed by and it was time to bring the giant faucet to the United Nations for our photoshoot. 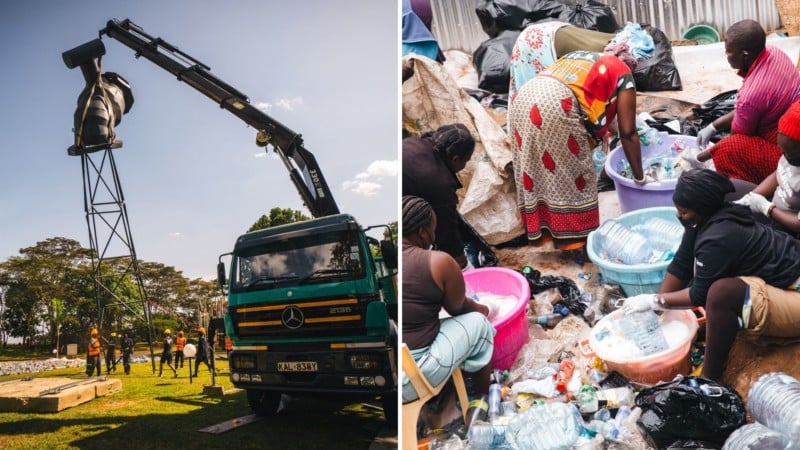 We hit the ground running at 8 AM with a crew of 15 people and a dream: to have the Giant Plastic Tap installed in a single day before sunset so that we could deliver our promise of photos of the winning pandas, hanging out at the United Nations, next to the art installation that they helped to fund.

Somehow, we pulled it off. An unlikely alliance of stakeholders united by art to make a difference in the only way they know how: The United Nations by providing the space, The Degenerate Trash Pandas through their financial support, the Human Needs Project with their engineering and community expertise, and me — the photography and art that tied it all together. The next day, negotiation began around what would eventually be dubbed as the “most significant green deal since the Paris Climate accord.”

The installation became what was undeniably the most photographed location on the entire campus. Dignitaries, representation, and even heads of state took selfies in front of it — all blissfully unaware of the tremendous amount of work that went on behind the scenes to bring this project to life.

But for once, I felt a sense of deep satisfaction.

This time, it was not just another project to raise awareness. This time it was about creating a solution of our own and celebrating those that have spent decades in the fight with a symbol of what they were fighting for. 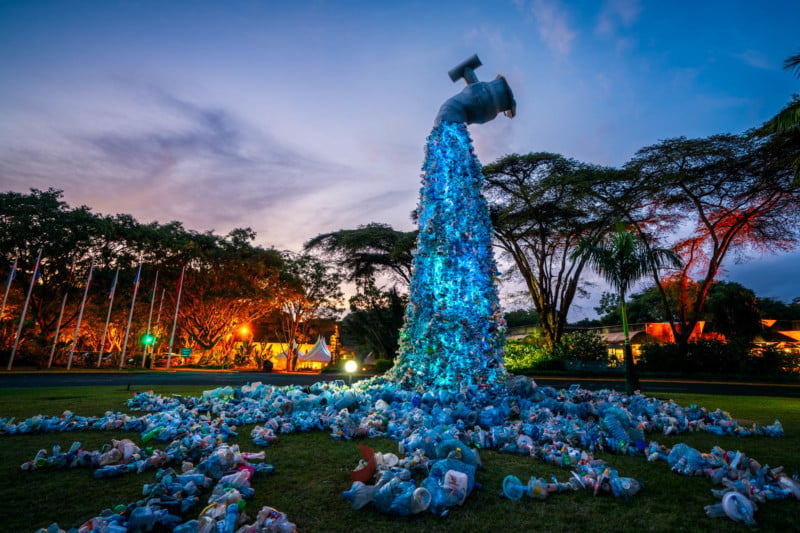 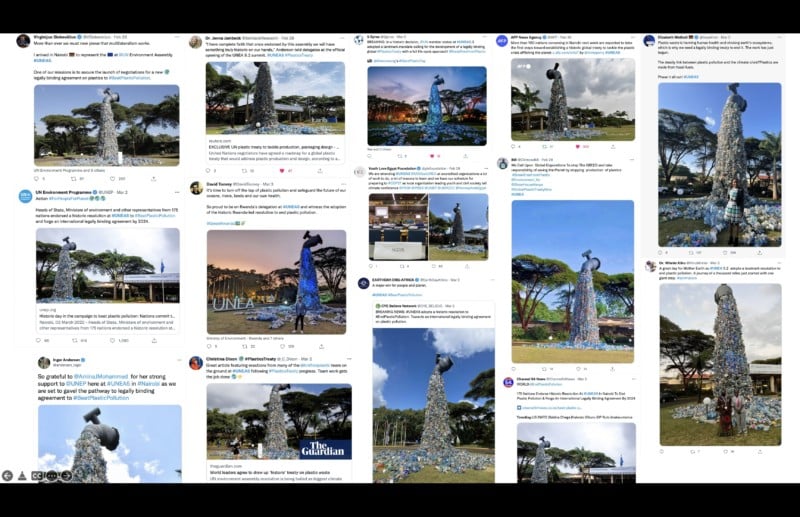 About the author: Benjamin Von Wong’s work lies at the intersection of fantasy and photography and combines everyday objects with shocking statistics. It has attracted the attention of corporations, like Starbucks, Dell, and Nike and has generated over 100 million views for causes like ocean plastics, electronic waste, and fashion pollution. Most recently, he was named one of Adweek’s 11 content-branded masterminds.

He is also the host of the Impact Everywhere Podcast and a creative advisor for the Ocean Plastic Leadership Network and the Sustainable Ocean Alliance.