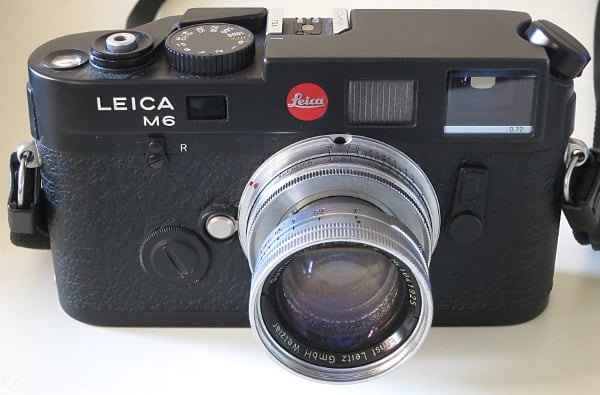 Between the 1940s and 1970s, a number of camera manufacturers designed lenses employing thoriated glass in one or more elements. Incorporating as much as 40% thorium dioxide (ThO2) in the glass mixture increases the index of refraction of the glass while maintaining low dispersion. Thoriated glass elements allowed lenses to deliver low levels of aberration and distortion with relatively simple and easy to manufacture designs.

As with everything in engineering, there are trade-offs. Thorium is a radioactive element; it has no stable isotopes. Natural thorium consists of 99.98% thorium-232, which has a half-life of 1.4×1010 years. While this is a long half-life, more than three times that of uranium-238, it is still substantially radioactive and easily detected with a Geiger-Müller counter. Thorium decays by alpha emission into radium-228, which continues to decay through the thorium series into various nuclides, eventually arriving at stable lead-208. 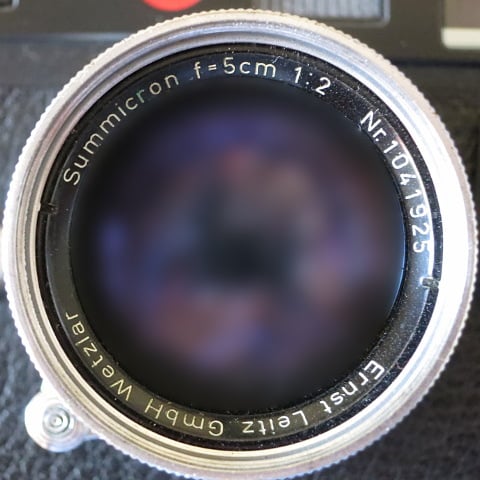 This lens was a screw mount design but can be used on more recent bayonet mount Leica cameras with a simple adapter. Like many early Leica lenses, it is collapsible: you can rotate the front element and push the barrel back into the camera body when not in use, making the camera more compact to pack and carry. Although 66 years old at this writing, the lens performs superbly, although not as well as current Leica lenses which are, however, more than an order of magnitude more expensive.

To measure the radiation emitted by this thoriated glass lens I used a QuartaRAD RADEX RD1706 Geiger-Müller counter and began by measuring the background radiation in my office. 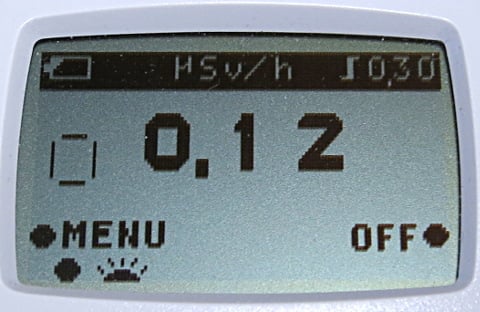 This came in (averaged over several measurement periods) as 0.12 microsieverts (μSv) per hour, what I typically see. Background radiation varies slightly over the day (I know not why), and this was near the low point of the cycle.

I then placed the detector directly before the front element of the lens, still mounted on the camera. The RADEX RD1706 has two Geiger tubes, one on each side of the meter. I positioned the meter so its left tube would be as close as possible to the front element. 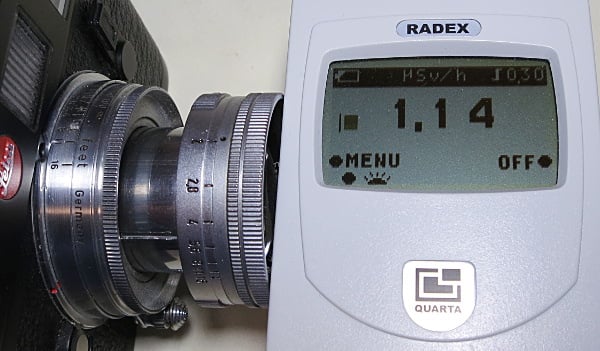 After allowing the reading to stabilize and time average, I measured radiation flux around 1.14 μSv/h, nearly ten times background radiation. Many lenses using thoriated glass employed it only for the front element(s), with regular crown or flint glass at the rear. This limits radiation which might, over time, fog the film in the camera. With such lenses, you can easily detect the radiation from the front element, but little is emitted backward in the direction of the film (and the photographer). This is not the case with this lens, however. I removed the lens from the camera, collapsed it so the back element would be closer to the detector (about as far as the front element was in the previous measurement) and repeated the test.

This time I saw 1.51 μSv/h, more than twelve times background radiation. What were they thinking? First of all the most commonly used films in the early 1950s were slower (less sensitive) than modern emulsions, and consequently less prone to fogging due to radiation. Second, all Leica rangefinder cameras use a focal-plane shutter, which means the film behind the lens is shielded from the radiation it emits except for the instant the shutter is open when making an exposure, which would produce negligible fogging. Since the decay chain of thorium consists exclusively of alpha and beta particle emission, neither of which is very penetrating, the closed shutter protects the film from the radiation from the rear of the lens.

Many camera manufacturers used thoriated lenses. Kodak even used thoriated glass in its top of the line 800 series Instamatic cameras, and Kodak Aero-Ektar lenses, manufactured in great quantity during World War II for aerial reconnaissance, are famously radioactive. After 1970, thoriated glass ceased to be used in optics, both out of concern over radiation, but also due to a phenomenon which caused the thoriated glass to deteriorate over time. Decaying thorium atoms create defects in the glass called F-centres which, as they accumulated, would cause the glass to acquire a yellowish or brownish tint. This wasn’t much of a problem with black-and-white film, but it would cause a shift in the color balance which was particularly serious for the color reversal (transparency) film favored by professional photographers in many markets. (My 1952 vintage lens has a slight uniform yellow cast to it—much lighter than a yellow filter. It’s easy to correct for in digital image post-processing.) Annealing the glass by exposing it to intense ultraviolet light (I’ve heard that several days in direct sunlight will do the job) can reduce or eliminate the yellowing.

Thorium glass was replaced by glass containing lanthanum oxide (La2O3), which has similar optical properties. Amusingly, lanthanum is itself very slightly radioactive: while the most common isotope, lanthanum-139, which makes up 99.911% of natural lanthanum, is stable, 0.089% is the lanthanum-138 isotope, which has a half-life of 1011 years, about ten times that of thorium. Given the tiny fraction of the radioisotope and its long half-life, the radiation from lanthanum glass (about 1/10000 that of thorium glass), while detectable with a sensitive counter, is negligible compared to background radiation.

If you have one of these lenses, should you be worried? In a word, no. The radiation from the lens is absorbed by the air so that just a few centimeters away you’ll measure nothing much above background radiation. To receive a significant dose of radiation, you’d have to hold the front element of the lens up against your skin for an extended period of time, and why would you do that? Even if you did, the predominantly alpha radiation is blocked by human skin, and the dose you received on that small patch of skin would be no more than you receive on your whole body for an extended period on an airline flight due to cosmic rays. The only danger from thorium glass would be if you had a telescope or microscope eyepiece containing it, and looked through it with the naked eye. Alpha radiation can damage the cornea of the eye. Fortunately, most manufacturers were wise enough to avoid thoriated glass for such applications, and radioactive eyepieces are very rare. (Still, if you buy a vintage telescope or microscope, you might want to test the eyepieces, especially if the glass appears yellowed.)

About the author: John Walker is the founder of Autodesk, co-author of AutoCAD, author The Hacker’s Diet, and operator of Fourmilab. The opinions expressed in this article are solely those of the author. This article was also published here.

Image credits: All photos by John Walker and used with permission

An Interview with Jarob Ortiz, the New ‘Ansel Adams’ of the National Parks